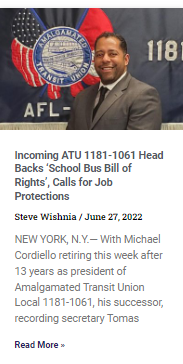 “We are in support of the School Bus Bill of Rights,” Fret, who will take over the Presidency on July 1st, told LaborPress.

Developed by the group Parents to Improve School Transportation (PIST), it includes restoring the “Employee Protection Provisions” eliminated by former Mayor Michael Bloomberg in 2013 - having only one school campus per bus route, no routes longer than 90 minutes, and supporting a good contract for Drivers.

Public school parents have complained for years that the buses, which are run by private contractors and primarily transport disabled and special-education children, are often late, sometimes don’t show up at all, and have routes that are so long and convoluted it can take two hours or more for their children to get to or come home from school.

The COVID Pandemic intensified those problems, as it worsened the shortage of Drivers.

How can that be fixed?

“Paying more money is always good,” he says, as would be better benefits. “And bring back Employee Protection Provisions.”

More than half the City’s School Bus Drivers have lost those protections since 2013, says Cordiello.

They had ensured that when the city hired a new contractor for a route, it had to hire the old contractor’s Drivers and Attendants in order of seniority, at the same pay and benefits.

Without the protections, Workers lost money, benefits, and job security.

“We have to give people reasons to stay,” Cordiello said.

The Assembly included them in its proposed budget earlier this year, but the State Senate didn’t.

Then-Governor Andrew Cuomo vetoed bills to restore them in 2016 and 2019.

“You have to be a special person to work with these children,” says Cordiello, adding some new Drivers quit within two days.

To Continue Reading This Labor News Story, Go To: www.laborpress.org/incoming-atu-1181-1061-head-backs-school-bus-bill-of-rights-calls-for-job-protections/