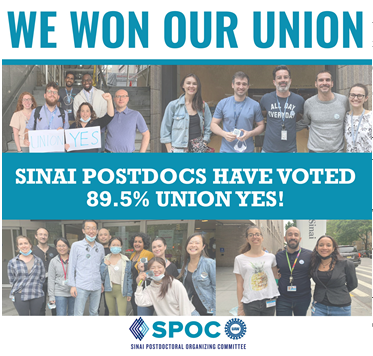 (NEW YORK CITY) - Postdoctoral Researchers at the Icahn Mount Sinai School of Medicine have voted 317-to-37 (89.5%) to choose Sinai Postdoctoral Organizing Committee-United Auto Workers (SPOC-UAW) as their Union and Bargaining Representative, according to ballots tallied by the National Labor Relations Board (NLRB).

The new Unit, which is only the second Postdoc Union ever established at a private institution, will represent more than 500 Workers.

“We are thrilled with the outcome,” said Elza Rechtman, a Postdoctoral Researcher in the Environmental Medicine and Public Health department and SPOC-UAW Leader. “Having a Union means we can finally start to make real improvements to our working conditions at Sinai. Our next step will be to democratically prioritize the changes we plan to bargain for.”

This vote is part of a string of recent victories for Unions, including wins at Starbucks and Apple stores and an Amazon warehouse.

There has also been a blaze of Academic Organizing in recent years, with more than 40,000 Workers choosing UAW at the University of California, Harvard, Columbia and other Education and Research Institutions.

In December, 17,000 Workers employed at the University of California alone won Union Recognition and joined UAW, which now represents more than 100,000 Academic Workers across the country.

“We are so energized by this vote,” said Yajing Xu, a Postdoctoral Researcher in Neuroscience. “As hard as we worked to win, we know that this is just the beginning.  We are confident that our union will be good for us and good for Mount Sinai and we look forward to meeting them at the table soon to bargain a contract that makes us all stronger.”

“I want to congratulate Sinai’s Postdocs on this huge step forward, and welcome them into the UAW family,” said Beverley Brakeman, who serves as the Director of UAW Region 9A, which includes New York City, New England and Puerto Rico.

“We look forward to supporting them as they negotiate a first contract that enhances the Postdoc experience at Sinai.  Drawing on our experience helping Postdocs win contracts at Columbia, UConn, and UMass, we hope for productive negotiations with Sinai that lead to a strong agreement in a timely manner,” Brakeman said.