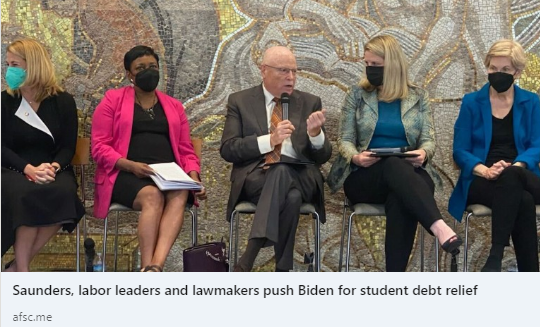 Many took on student loans to attain the skills and credentials needed to pursue jobs in public service, including: Nurses, Librarians, Social Workers, Child Care Providers and more.

Yet, their economic security is in peril - on average, borrowers spend nearly $400 a month toward student loan repayment.

“This is a priority for the Trade Union Movement because it is a Labor issue affecting millions of our Members across the country,” Saunders said. “Working Families are confronting a tidal wave of student debt and barely keeping their heads above water.”

President Saunders also spotlighted the ways in which student debt is tied to income inequality: “Women hold two-thirds of the country’s student debt.  Black and Brown People owe, on average, (80%) of their original loan.  And let’s push back on this back on this myth that student debt relief will only help Ivy League elites.  That’s just a pundit narrative that doesn’t hold up to any scrutiny at all.  The truth is that the folks carrying this debt are overwhelmingly Working Class.”

Donise Keller, a Child Care Provider from California and a Member of United Domestic Workers (UDW), is one of the millions facing crushing student debt.

In her 20s, aiming to better her life and the lives of her kids, she enrolled in Trade School.

“I was (26), and I took out around ($26,000) over about two to three years,” Keller said. “And it just blew up.  Now, I owe around ($50,000).  The school was very expensive, but they told me not to worry about it, we’ll give you student loans and grants because you are low-income. That’s all I heard and didn’t know enough about loans to ask any questions.”

A mother of three children, Keller could only watch as her loans collected interest month after month – now she couldn’t afford to pay them down, getting stuck in an endless cycle that so many borrowers experience.

In fact, most borrowers have no household wealth at all.

“That student debt seems insurmountable,” Keller said. “I’m a single mom just trying to survive and the price of living is increasing.”

But thanks to her Union, however, Keller is now able to pursue a Bachelor's Degree in Early Childhood Education - for free.

Unfortunately, many don’t have that opportunity.

To Continue Reading This Labor News Story, Go To: www.afscme.org/blog/saunders-labor-leaders-and-lawmakers-push-biden-for-student-debt-relief