The United Steelworkers: âSharing Our Fred Redmond With The Worldâ 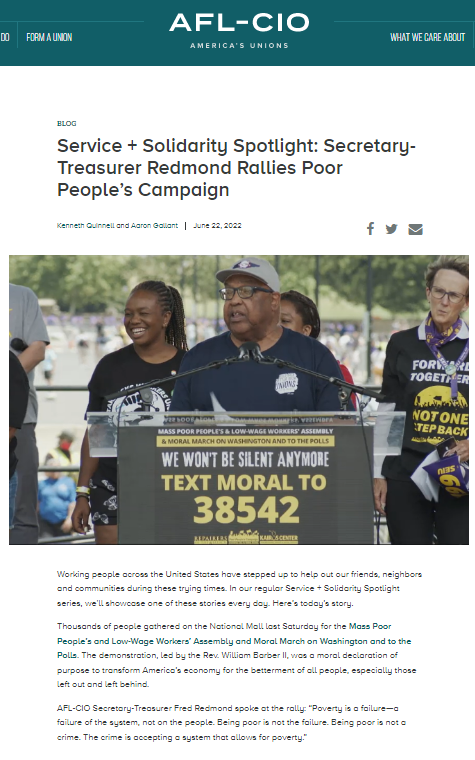 Redmond will lead America's 12.5 million Union Members along with Liz Shuler, who was elected the first-ever female President of the National AFL-CIO at the Labor Federation’s recently-held convention in Philadelphia.

Conway, a Member of the Nation's top Labor Organization's Executive Council, was flanked by USW Leadership and Members who attended the convention, when he said: "I'm surrounded by our family and we're all so proud to make this nomination of our Brother, Fred Redmond.”

"This is an amazing story of a man who can trace his ancestry on both sides - maternal and paternal - to slavery," Conway said as he recounted the personal story of Redmond's Family's rise from cotton fields to a Middle-Class life in Chicago, in part, thanks to good Union jobs at Steelworkers’ facilities.

"Fred remembers getting dental coverage and good health care through his Union," Conway recalled. "Eventually Fred followed in the footsteps of his Uncle and Dad and worked his way up through our Union's ranks."

"Our Union could not be prouder of Fred.  There is no one better prepared," Conway said.

Redmond gave the USW a special shout out in his acceptance speech in Philadelphia: "I want to give special thanks to my Union, the United Steelworkers, and to President Tom Conway for putting my name forward and for your unyielding trust in me.  The Steelworkers Union has nurtured me and allowed me the opportunity to be a leader in our great Union.  And I will always be indebted to you and to former President Leo Gerard, who brought me on board."

And For More, Go To: https://aflcio.org/2022/6/22/service-solidarity-spotlight-secretary-treasurer-redmond-rallies-poor-peoples-campaign