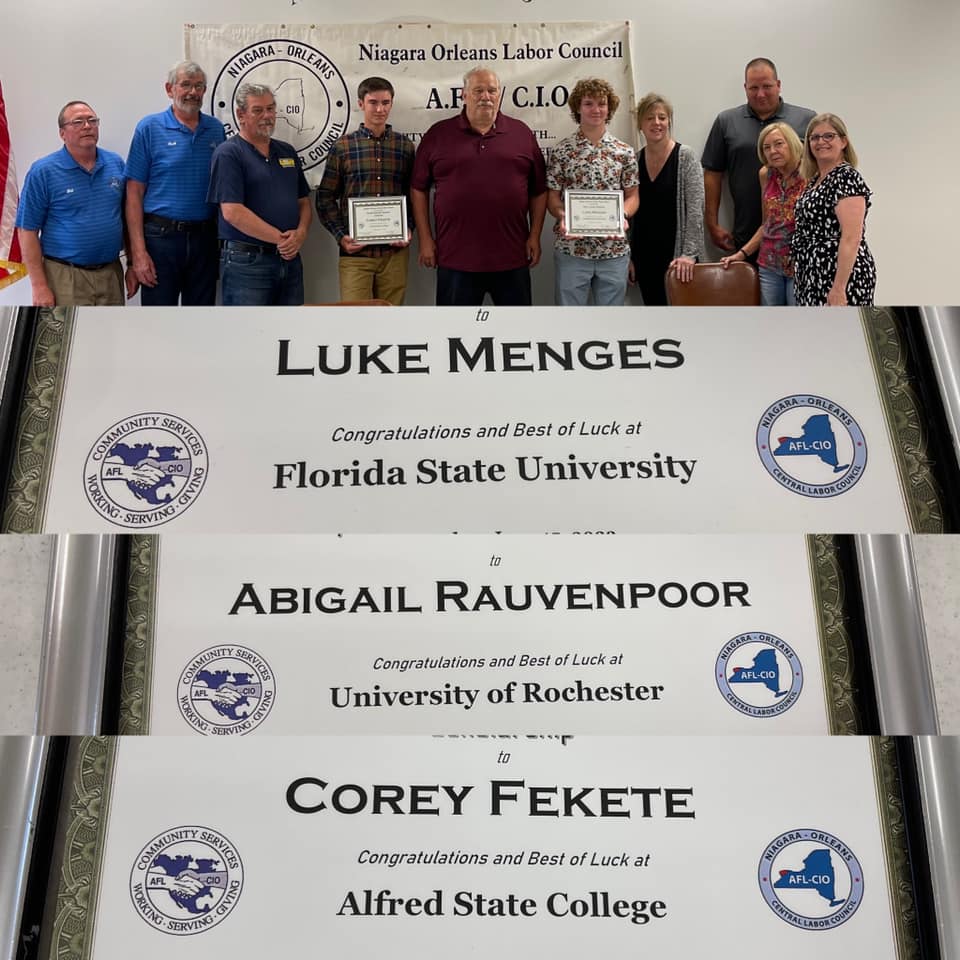 WNYLaborToday.com Editor’s Note: Pictured above, the Executive Board of the Niagara-Orleans AFL-CIO Central Labor Council poses with the 2022 recipients of the Council’s annual Harry S. Jordan Scholarships.  Three chosen graduating high school seniors, whose parents work in Union-represented jobs, received their awards earlier this month inside the offices of what once housed International Union of Operating Engineers (IUOE) Local 463 in the Niagara County Town of Ransomville.  (WNYLaborToday.com Photos)

(RANSOMVILLE, NEW YORK) – For the past 38 years, the Niagara-Orleans AFL-CIO Central Labor Council has annually awarded its Harry S. Jordan Scholarships to chosen area graduating high school seniors whose parents are Union Members.  And over the course of that time, a unique opportunity arises for seasoned Labor Leaders and Representatives to listen to these young people who provide their opinions on the benefits of the Labor Movement.

“It’s ‘exciting’ to hear what these young people have to say, ‘especially when Labor History isn’t taught in our schools,’” Niagara-Orleans AFL-CIO President Jim Briggs said during a ceremony that was held earlier this month inside the offices of what once housed International Union of Operating Engineers (IUOE) Local 463 in the Niagara County Town of Ransomville. 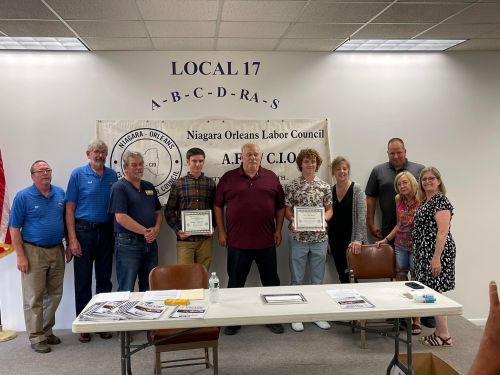 “‘I know that what I have today is because of what (Union) people did for me,’” continued Briggs, who also serves as United Steelworkers District 4’s Sub-District Director.  “‘That’s why I am proud to be part of the role (Organized Labor plays here in Western New York).’”

Addressing the award winners, Briggs added: “‘We will be here for you.’”

Each recipient received a framed award and a check for $500. 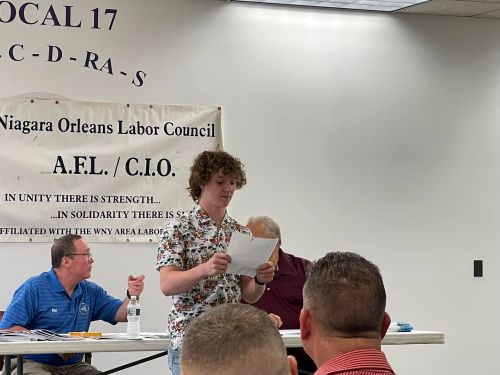 Reading his essay, Menges (pictured above), who will continue his education at Florida State University, said in part: “Unions ‘are relevant and are an integral necessity for Workers, a great many of who - (92%) have health care.’” 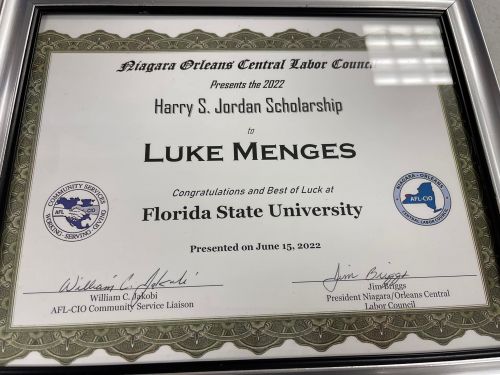 Reading his essay, Fekete (pictured below with Labor Council President Jim Briggs), who will continue his education at Alfred State College, said in part: “(Building Trades) Unions ‘help’ employers ‘meet the demand (for Workers) and a quality workforce, (which in turn) reap the benefits.’” 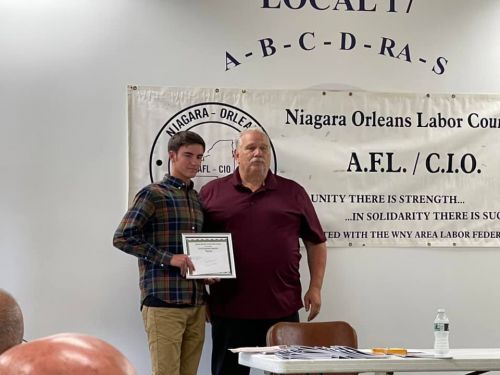 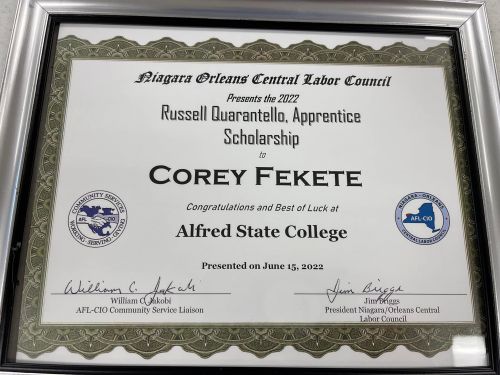 “An education ‘is important’ for our children.  It’s (the Council’s) ‘investment in enriching their skills.’  ‘This will help toward their college costs and it is the Council’s hope they will do something good for the communities that they live in’ (as they grow into adults).  ‘The future is now in your hands - good luck!’” 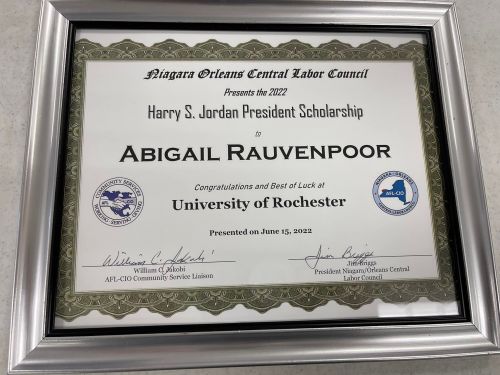 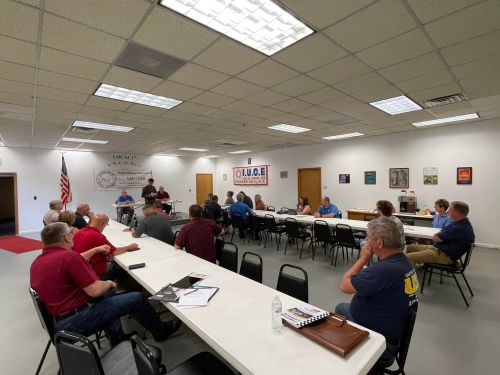 Harry S. Jordan was born in England in 1894 and later immigrated to America.

After moving from Springfield, Illinois to Niagara Falls in 1914, he began to pursue his chosen trade with the International Brotherhood of Electrical Workers (IBEW).

Jordan served as the first Business Agent for Local 237 in Niagara Falls, a position he held for 52 years.

Serving on the Local's Apprenticeship Board, Jordan was involved in establishing courses that maintained the highest standards of craftsmanship.

In 1958, then U.S. Secretary of Labor James Mitchell cited Jordan for his efforts.

Jordan's achievements were many.

He served as President of the Niagara Falls Federation of Labor in 1919 and continued in that capacity until it merged with the Niagara-Orleans Labor Council in 1956.

Jordan served as its President until 1971.

Jordan's interest in helping the everyday Working Person extended far beyond Organized Labor into the field of public housing.

For his efforts, Jordan was affectionately known as the Father of Public Housing.

He served on the Niagara Falls Housing Authority for 30 years, including 14 as its Chairman.

In 1963, the Public Housing Administration cited Jordan for his efforts and dedication.

On another front, Jordan was active in the American Red Cross, the Community Chest, served as a member of the Niagara Falls Urban Renewal Agency, as a Trustee on the Niagara Community College Campus in Sanborn, and also found time to serve as Chairman of the Educational Foundation at the local college.

In a bio that has appeared for years in the scholarship dinner program, noted: "Jordan's long record of continuous service to Organized Labor stands as a tribute to the ordinary man.  Everyone who knew him benefited from knowing him, his hard work, positive influence upon his community, as well as, to the area's Unionized Construction Industry continue to this day."