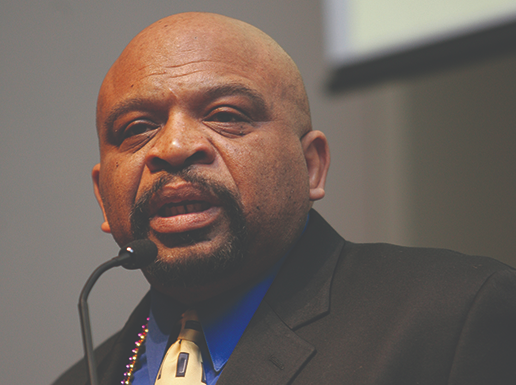 (NEW YORK CITY) – 1199 Service Employees International Union (SEIU) United Healthcare Workers East, the largest Union of Health Care Workers in the Nation whose mission is to achieve quality care and good jobs for all, recently installed its newly-elected Leadership Team at a ceremony that was held in Midtown Manhattan – including George Gresham, who was was re-elected to his sixth term as President.

Gresham first joined the Union as a Rank-and-File Member in 1975, when he got a job as a Housekeeper at Presbyterian Hospital.  Through 1199’s Training and Upgrading Fund, he went back to school to become a Radiology Technologist.

His Co-Workers elected him as Delegate, after which he joined Union Staff as an Organizer.

He exceled in his role, and over the course of four decades became the only 1199 SEIU Member to hold every elected position in the Union’s Constitution- Delegate, Organizer, Vice President, Executive Vice President, Secretary-Treasurer and President, a title which he has held since 2007.

He has led the Union’s growth to more than 450,000 Members throughout the States of Massachusetts, New York, New Jersey, Maryland and Florida, as well as in Washington, D.C.

“Serving as President of 1199 is an honor of a lifetime and I am humbled by the Members who chose me to continue in this role during what has been the most turbulent time in the Health Care Industry in generations,” President Gresham said.

“1199 Members know that we can overcome anything if we organize, mobilize and use our collective power as Working People.  There is so much work to be done in our country to defend Workers’ Rights, expand access to health care, advance social and economic justice, and preserve our Democracy.  Dr. Martin Luther King, Junior once described 1199 as ‘the authentic conscience of the Labor Movement,’ and we are determined to live up to those words as we meet the challenges of today,” he said.

Elected to the Union’s #2 post as Secretary-Treasurer was Milly Silva, who previously served as Executive Vice President for the Union’s 55,000-strong Nursing Home Division in New York and New Jersey.

The daughter of a Home Care Worker, Silva grew up in the Bronx and after graduating college became a tenant and Community Organizer, then a Labor Organizer, overseeing organizing and representation for tens of thousands of low-wage Health Care Workers on both sides of the Hudson River.