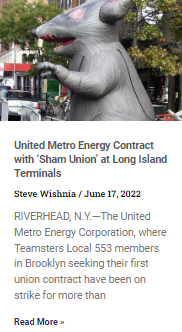 (RIVERHEAD, NEW YORK) - The United Metro Energy Corporation, where Teamsters Local 553 Members in Brooklyn who are seeking their first Union contract have been on Strike for more than a year, recently announced it had signed a five-year Union contract at its two Fuel Oil Terminals on Long Island - but the Teamsters call the Union there, United Service Workers Union Local 355, a “sham Union.”

The deal covers 24 employees, including Terminal Operators, Mechanics and Service Technicians, at United Metro Energy’s facilities in Riverhead and Calverton.

“On behalf of myself and our companies, I would like to thank Local 355 for bargaining professionally and for sharing our desire to get a good deal for both sides, in fewer than six months, during these difficult economic times,” the company’s owner, Supermarket Magnate John Catsimatidis, said in a statement.

“Catsimatidis is cutting a deal with an illegal organization,” responded Local 553 President Demos Demopoulos. “This is just one more Union-Busting move from the billionaire who fired Immigrants for going on Strike.”

Local 553 represents 14 Workers, including Terminal Operators, Mechanics and Service Technicians at United Metro’s Brooklyn terminal who went on Strike in April 2021 after more than two years of trying to win their first Union contract.

Demopoulos says the line about “bargaining professionally” is a personal barb, intended “to make me look bad, that I’m being unreasonable.”

Local 355’s benefit package is nothing near what the Teamsters provide, he added.

The Teamsters say a main reason for the Brooklyn Strike is that UMEC’s pay and benefits at the terminal, located on the Newtown Creek Waterfront in Greenpoint, are substantially below industry standards in the area.

Strikers there say they were paid at least $8 an hour less than what they’d get for the same job at other fuel companies, and have less time off and much weaker benefits.

The USWU, which is based in New Rochelle, is under the umbrella of the International Union of Journeymen and Allied Trades (IUJAT), which also includes an organization called the Home Healthcare Workers of America.

It is descended from the United Service Workers Association, which either quit or was kicked out of the AFL-CIO in 2003, depending on who’s telling the story.

The organization has had numerous disputes with Building Trades Unions over raiding and Apprenticeships.

To Continue Reading This Labor News Report, Go To: www.laborpress.org/united-metro-energy-contract-with-sham-union-at-long-island-terminals/