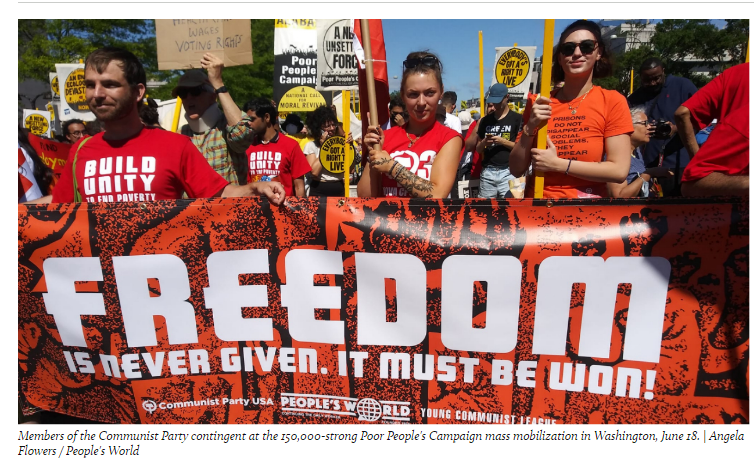 (WASHINGTON, D.C.) - Demanding an “end to policy murder” that slams poor and low-wealth people, Poor People’s Campaign Co-Chair - the Reverend William Barber II and more than 150,000 allies took to the streets of the Nation’s Capital in a mass rally over the weekend.

Their goal: Massive changes in Federal policy away from enriching the rich, corporations, and the Capitalist Class and towards ending the plight of the Nation’s 140-million-plus poor and low-wealth people.

Attendees, including a large contingent from the Service Employees International Union (SEIU) and Members of other Unions, insisted lawmakers and Democratic President Joe Biden redirect Federal money away from war and toward domestic needs, raise the Federal Minimum Wage to $15 an hour, strengthen Workers’ Rights, and battle against systemic racism, among other goals.

“I didn’t know I was being screwed,” she told a reporter.

Marchers and leaders laid the blame for refusing to act for the poor and for Workers at the feet of the Corporate Class and their political minions, especially in the evenly split U.S. Senate.

Blacks, Whites and Latinos/Latinas all “are suffering from poverty due to bad tax policies, the war economy, and religious nationalism,” among other scourges, Barber added.

In opposition to those ills, “This is what moral fusion politics looks like,” he said.

The marchers and the Poor People’s Campaign also demand passage of laws to preserve and strengthen voting rights, while concentrating on extra aid to poor and low-wealth people of every race, creed, and heritage.

And a large banner had a message for the Right-Wing majority on the U.S. Supreme Court, too: “Overturn Roe?  HELL, NO!”

The Justices are expected to eliminate the Constitutional Right to an abortion, disproportionately hurting poor Women and Women of Color, by the end of this Court’s term.

“We are resolved not to stop until we no longer have to fight,” Barber stated. “We are the Poor People’s Campaign, and we won’t be silenced anymore.”

To Continue Reading This Labor News Story, Go To: www.peoplesworld.org/article/150000-bring-poor-peoples-campaign-demands-to-d-c-we-wont-be-silent/