âPressure Breaks Pipesâ - ATU Local 1342 Reps Discuss Their Unionâs âHistoric & Life Changingâ Contract With The NFTA, Local âNow Fielding Calls From Interested Unions Across The U.S. That Want To Know How They Did Itâ 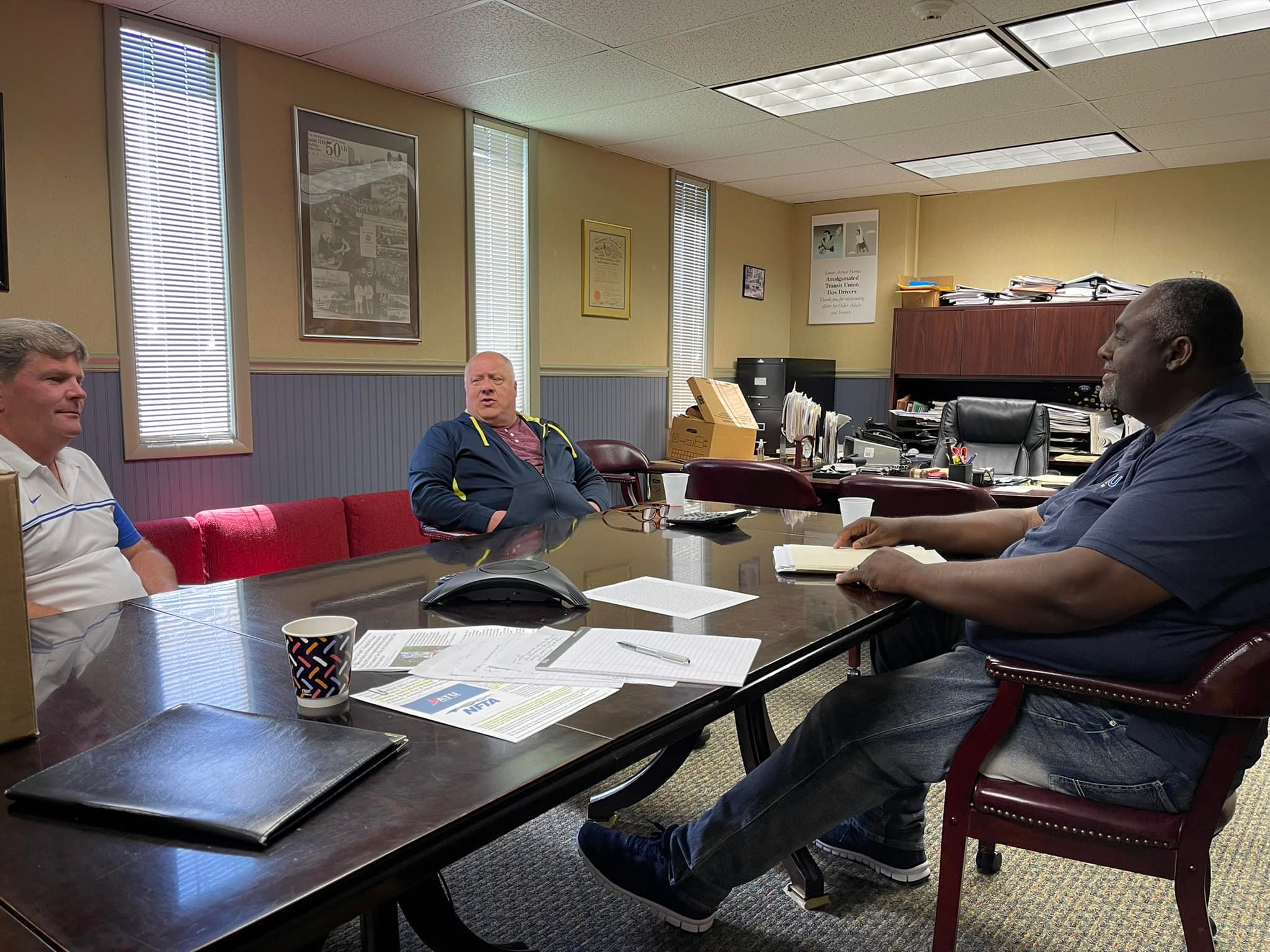 WNYLaborToday.com Editor’s Note: Pictured below, Amalgamated Transit Union (ATU) Local 1342 President Jeff Richardson (on the right), Financial Secretary/Treasurer Ron Giza (in the middle) and Vice President Kevin Kline (on the left) sat down with WNYLaborToday.com to discuss a recently-negotiated and ratified contract with the Niagara Frontier Transportation Authority (NFTA) that has been described as both “historic and life-changing” for the Local’s 1,200 Members.  In fact, Unions from across the United States have been contacting the Suburban Buffalo-headquartered ATU Local to find out just how they did it.   (WNYLaborToday.com Photos)

(BUFFALO, NEW YORK) – With all that’s transpired in Buffalo over the past several months - most notably being the birthplace of what has grown into a national Unionizing wave by Starbucks Coffee Chain Workers, the successful effort by leadership at Amalgamated Transit Union (ATU) Local 1342 to negotiate what has been described as a both “historic and life-changing” contract with the Niagara Frontier Transportation Authority (NFTA) has, to say the least, been somewhat overshadowed.

Local 1342’s new three-year deal featured retro pay back to April 1st (2022) from the previous contract, serious raises in each year of the agreement - now coined as equity adjustments, and a $1,750 bonus for the 1,200 Union-represented NFTA Employees, which include Bus Drivers, Mechanics, Porters, Rail and Shop Workers, Tool Helpers, Training Representatives and those who work in the NFTA’s Clerical Department.

Additional highlights included: Raises of 2% in year two and 2.25% in year three of the agreement; An equity adjustment raise of 9% on April 1st (2022) for total of 11.25% - “instantly;” Longevity increases on top of the raises, beginning April 1st (2022); A second longevity increase in year two of the contract; Additional bereavement time for the death of grandparents and grandchildren; Additional sick time; A $,1750 bonus for coming to work; Juneteenth added as permanent holiday; A Defined Pension Plan - an 11% company contribution, a 5% Member contribution was not touched; and there was no change to the Members’ employer-paid Health care coverage until 2024, when ATU Members’ investment will increase from 11% to 12%.

Local 1342 President Jeff Richardson, Financial Secretary/Treasurer Ron Giza and Vice President Kevin Kline used the following examples to illustrate the bump in pay that Union Members are realizing under the new contract: A Bus Driver currently making $54,000 a year will now receive $61,000 for a 40-hour work week; while a Leader Mechanic will go from $48,218 to $60,278; and a top Clerical Personnel from $60,750 to $66,227.

Local 1342’s Membership, some who have called the new deal with the NFTA “life-changing,” ratified the agreement by a final vote of 563-to-10. 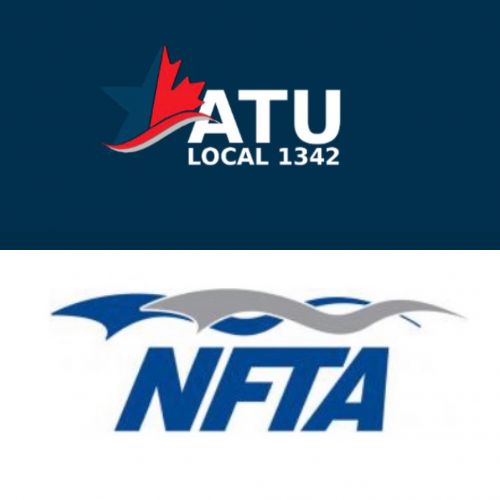 So, how did Local 1342 accomplish such results and why are Unions from across the country contacting the ATU here in Buffalo to find out how this all came about?

WNYLaborToday.com recently sat down with Richardson, Giza and Kline - who have a combined 110 years in Membership and service to their ATU Local - to get those answers, as well as others to questions that apparently many more in the Labor Movement are asking.

The trio said the new agreement was achieved after several months of very public discussion on the lack of pay needed to attract qualified Workers - most notably Bus Drivers, during a labor shortage, the cutting back of service that resulted in an outcry from the local bus-riding community and a perceived lack of respect for those essential Local 1342 Members who’ve worked throughout the COVID-19 Pandemic.

“It was ‘masterful,’” offered Giza (pictured below) of his Union’s multi-faceted campaign, which the three said featured a combination of several simultaneous actions over the course of time that ultimately bore fruit, including: Amazing support from the Western New York Labor Community and from Local, City, County, State and Federally Elected Officials; Support from Community Activists and a NFTA Bus Riders Group; A series of high-profile and media-capturing public events; Filing for Freedom of Information requests for all kinds of financials related to the public transportation entity; a beneficial public hearing that was held before the Erie County Legislature where an uncomfortable NFTA Executive Director Kim Minkel did not fare well; and drawing on the strength of a very informed Membership, as well as the years of experience of the Local’s Contract Negotiating Team. 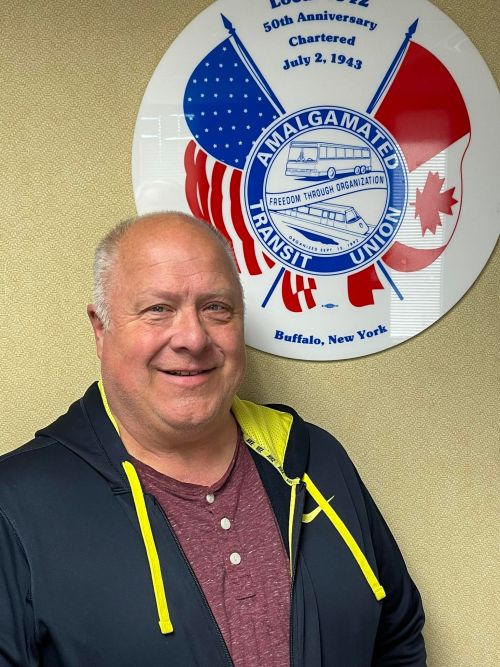 “‘Pressure breaks pipes,’” Local 1342 President Richardson (pictured below) said, matter-of-factly. “No one had ever held (the NFTA) accountable.  Albany writes our checks, so we filed (Freedom of Information) requests for ‘everything’ - ‘including (management’s) salaries’ (The Union found NFTA Executive Director Kim Minkel was being paid a yearly salary in the mid-$200,000s).  ‘With everything we did, all the pressure was on them (to come to an agreement) because we weren’t backing down.’  ‘And they looked terrible (NFTA Executive Director Minkel) when they went before the Erie County Legislature’ (to answer questions from Elected Officials).  Minkel ‘actually told them at one point that she had to leave by (1 p.m.).’” 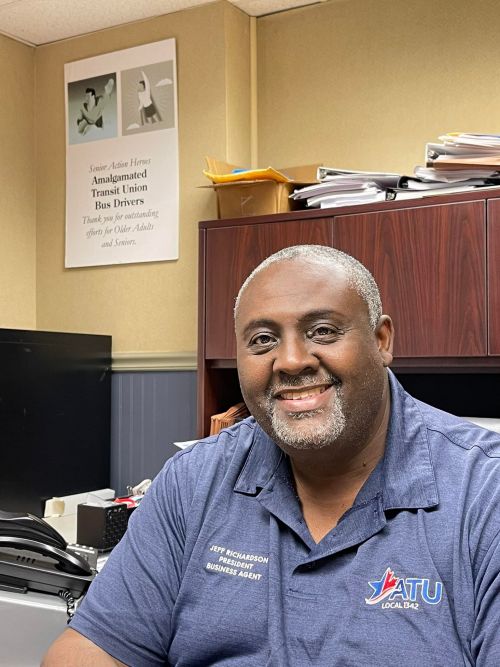 “We (also) had ‘incredible success’ on the Labor and political side (garnering support for the NFTA Workforce) ‘to the point where the local media and the politicians were calling us, after we’d brought them together (on the issue),” Giza said.

Using the overall excuse of a labor shortage for cutting bus routes finally caught up with the NFTA after horror story after horror story was aired and published by the local media, including those negatively impacting inner city Minority residents, most notably the elderly who were forced to walk blocks and blocks to take another bus route to get where they were going, and suburban White residents whose complaints were growing louder and louder by the day.

“‘All the pressure was on (the NFTA),” said Kline (pictured below), even though the NFTA had hired a high-powered lobbying firm that featured former Buffalo Mayor Anthony Masiello. “They brought in ‘their’ professionals, ‘their high-powered guns.’” 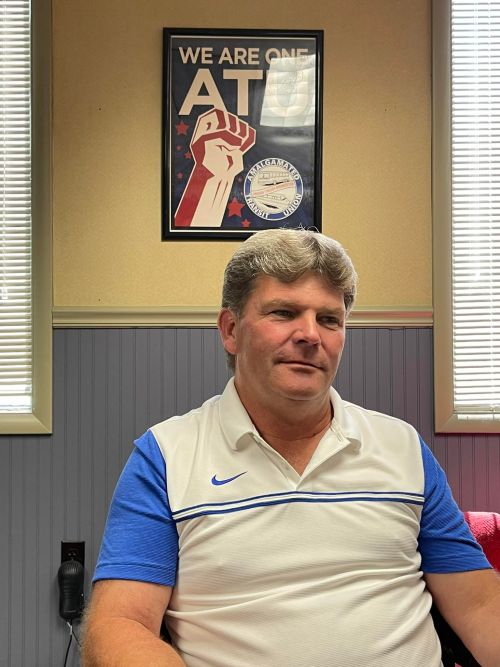 “But we ‘didn’t back down,’” Richardson said.

With an approaching April 1st deadline that came with the New York State Budget being adopted (the NFTA receives State funding on a yearly basis), the Local 1342 Representatives moved quickly to re-coin any raises or wage increase as an equity adjustment.

“We ‘struck while the iron was hot,’” Giza said.

“And ‘we came together as a group because we were all on the same page,’” Richardson said.

Now, the Local is fielding calls from other ATU Unions and Unions from across the country that want to know what occurred, what the particulars were and how they too might take the same approach when negotiating their contracts.

“We get calls, ‘it seems, every other day’ from other Unions ‘trying to figure out how we got such a good contract.’  ‘We tell them they have to file for the information to find out how the employer is spending the money they get.’  ‘Now they’re using the term equity adjustment,’” Richardson said.

“We have a cap on our health insurance ‘and they want to know how we did that,’” Klein added.

“Experience ‘matters,’” added Giza, “as well as Jeff’s connection with our (ATU) International (Union, whose legal counsel also offered support that was taken advantage of).  And we (the Local’s Executive Officers) ‘have the freedom (provided by Richardson, as President) to do what we have to do.’  ‘I appreciate (Richardson’s) leadership and his belief in our ideas.’”

“‘We ‘really do have a good team,’’” Kline offered.  “Egos ‘took a back seat’ and Jeff ‘was great using Facebook live to constantly keep our Members educated’ (as to what was transpiring at the negotiating table).”

“Our team ‘is great and we had the knowledge where we walked into the conference room (during negotiations) with confidence,’” Richardson said. “And ‘we asked our Members for their questions, telling them we were an open book.’”

In regards to Kline, who has decided to retire, Richardson said: “I want to ‘thank’ my Vice President ‘for all he has done for thirty-five years - as well as for his heart, passion and kindness.’”

With all that is in place in the new contract, including improved and higher salaries, Richardson, Giza and Klein told WNYLaborToday.com the NFTA now has a waiting list of more than 300 individuals who’ve signed up for jobs at the public transportation authority.

In the past, NFTA management has not taken input from its Unions and its Bus Drivers, Richardson, Giza and Klein said, which is especially disappointing since its Employees are extremely familiar with all sections of the City of Buffalo, as well as the entire region it serves - no matter if it is the predominately Black East Side or the White suburbs.

But with 65% of the Union’s Membership being African-American (rounded out by another 10% being Latin and remaining 25% being White), maybe now, the NFTA will start to.