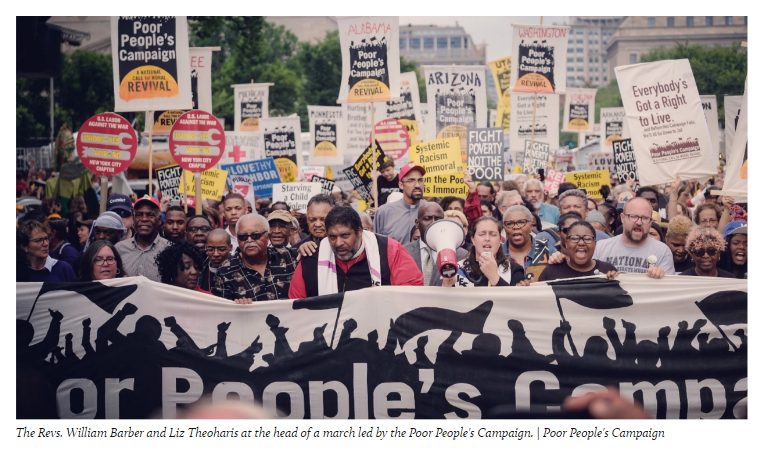 (WASHINGTON, D.C.) - Tens of thousands descended on Washington, D.C. over the weekend for the historic, multi-racial Moral March on Washington and to the Polls.

The march occurred during the Juneteenth Holiday weekend and the growing battle to preserve and extend U.S. Constitutional Democracy.

The march, called by the Poor People’s Campaign, aimed to mobilize the Nation’s 140 million Black, Brown and White Poor and Low Wage Workers, and to unite, organize, and activate this potentially powerful force in coalition with others to remake U.S. Society, the economy and Democracy - from top to bottom.

Such a force could be decisive for the upcoming Mid-Term Elections.

At stake is the people’s ability to shape the Nation’s future for the benefit of all, our Constitutional Democracy, the lives and rights of our people, and the existence of planet Earth.

Juneteenth celebrates the emancipation of enslaved African Americans in 1863.

This tradition of observance and celebration dates back to 1866 and is deeply rooted in African-American Culture and History.

The adoption of Juneteenth as a Federal Holiday by a Democratic-majority Congress and President reflected the victory of a broad pro-Democratic, multi-racial, anti-racist coalition of forces that ousted the most openly racist administration in 100 years.

It also demonstrated the strength and level of African-American equality and anti-racist movements to advance a multi-racial Democracy and is a dramatic validation of the premise that elections have consequences.

But the Moral March and Juneteenth celebration also occur against the backdrop of the ongoing attempted coup by former Republican President Donald Trump, his billionaire allies, the insurrectionist GOP and the far-right and fascist movements so vividly captured during the nationally-televised hearings of the January 6th Select Committee.

Their ascension to power would open the door to the complete rollback and likely violent repression of all Democratic Rights.

The fight to mobilize the majority of Americans to isolate and defeat these forces to preserve and expand Democracy is growing.

The Reverend William Barber III and Reverend Liz Theoharris, who serve as Co-Leaders of the Poor People’s Campaign and the June 18th march, are among those who view the current drive to defend and expand Democratic Rights as part of what is referred to as a Third Reconstruction in the U.S.

They view it as a radical remaking of U.S. society, politics and economy to benefit all.

To Continue Reading This Labor News Story, Go To: www.peoplesworld.org/article/juneteenth-2022-demanding-a-third-radical-reconstruction-of-u-s-capitalism/