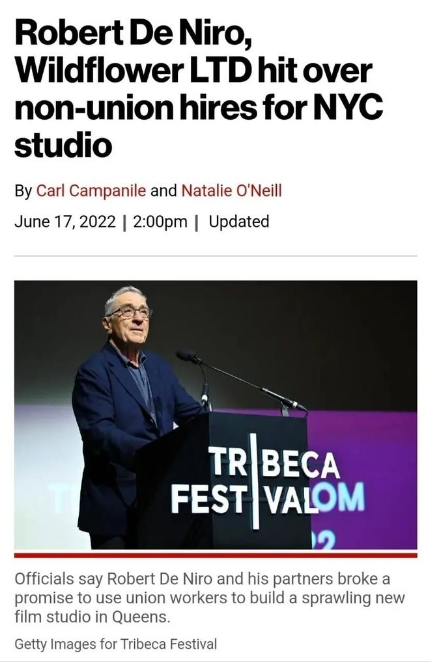 (NEW YORK CITY) - A Number of Building Trades Unions - Steamfitters Local 638, Sheet Metal Workers Local 28, Laborers Local 79, International Brotherhood of Electrical Workers (IBEW) Local 3 and Plumbers Local 1, are calling on legendary Actor and Native Son of New York, Robert De Niro, to ensure that the Men and Women working on the outside on his new $600 million-dollar, state-of-the-art studio being built by his Studio Production Company, Wildflower LTD in Astoria, are afforded the same Union protections and benefits as Entertainment Professionals who will one day work inside.

This project has been lauded by De Niro and developers for the thousands of Union jobs it will provide to Actors, Stagehands, Technicians and others in the Entertainment Industry - but most of the Workers who are now actually building Wildflower Studio have no Union protections, no access to fair wages, no health care or pensions, and none of the safety and professional standards that Unionized Building Trades Workers bring to a construction project.

Members and supporters rallied late last week outside the construction site to ask De Niro to bring quality Union work into the very foundation of the project, and build a studio Queens can be proud of.

Mr. De Niro praised his Union, saying Actors are “always worried about their next job… don’t do it all alone.”

It was a full-throated statement of support for Labor, and a message we wish we heard more often on television and in the media.

This project has been lauded by the Actor and developers for the thousands of Union jobs it will provide to Actors, Stagehands, Technicians and others in the Entertainment Industry.

Sadly, most of the Workers actually building Wildflower Studio have no Union protection, no access to fair wages, no health care, or pensions, and none of the safety and professional standards that Building Trades Workers bring to a construction project.

Their Members are hard-working people who have gone through five-year apprenticeship Programs to learn their craft and earn their certifications and proper safety techniques.

They have careers, not jobs, which provide for them, their families and their communities.

Like the Actors and Performers in SAG-AFTRA, they too always worry where the next job will be, and sadly, as things stand today, it seems that job will not be building Mr. De Niro’s studio. Unlike their Union siblings in the Entertainment Industry, they do not have the spotlight of Hollywood or television to use to carry their message and protect their interests.

Mr. De Niro said, “If I have a bigger voice because of my situation, I’m going to use it whenever I see a blatant abuse of power… There’s right and there’s wrong.”

We concur, and as representatives of New York’s Working People, we ask you to call out the abuse of power by your own multi-million-dollar company who low bid its workforce and deprives New York’s workers of high-paying, Union jobs that would bring vitality and economic development to a neighborhood which has suffered so much since the pandemic.

We urge you to use your voice along with ours to say it’s wrong to staff a major construction project with Workers lacking the necessary skills and training to work effectively and safely on the job.

It’s wrong to not pay a family-sustaining wage.

It’s wrong to not provide Union health and retirement benefits to your Workers.

It’s wrong to ignore the Unionized Professionals in our industry who have the skills and training to build this project in a timely manner.

Not only that, but building Union means the project is more likely to finish on time, with long-lasting quality work and a significantly lower chance that injuries will take place while building Wildflower Studios.

The Labor Movement is having a moment - more workers than ever before in recent history are interested in joining a Union, and supporting Workers who are seeking to collectively bargain for a path to the Middle Class.

As the representative in this District, along with the trades, I am calling on Mr. De Niro, the owners of Wildflower Studios and the contractors on this project to ensure that the Men and Women working on the outside of this studio are afforded the same Union protections and benefits as Entertainment Professionals who will one day work in the studio.

Anything less deprives our community of jobs and economic development that is especially vital right now as we recover from pandemic and recession.