Labor Perspective From Joel Kotkin, The Presidential Fellow In Urban Futures At Chapman University & Executive Director Of The Urban Reform Institute: âForget College, The Skilled Trades Are The Future Of The U.S. Economyâ 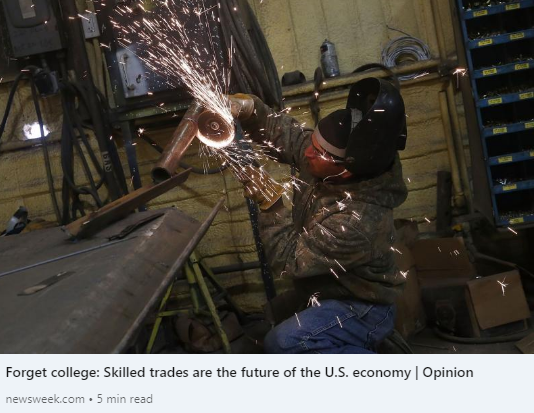 America is suffering from a Worker shortage, but a more persistent and perhaps even urgent problem is the profound lack of skills among younger Americans.

American elite universities may still be still regarded as the world's best, but for most young people, the educational system - from grade school to graduate school - is something of a failure, a critical engine of persistent inequality and diminished competition on the international stage.

This crisis in competence predates the pandemic and so does the very-related labor shortage.

The percentage of firms reporting shortages of labor more than doubled between 2015 and 2020, to 70%.

Low birthrates among Millennials has created what the forecasting firm EMSI describes as a "demographic drought," as U.S. population growth between 16 and 64 has dropped from 20% in the 80s to less than 5% last decade.

By 2028, Korn Ferry projects there will be a deficit of at least six million Workers.

But the bigger problem is not just numbers.

The big issue is the lack of skills throughout the workforce.

From grade to graduate schools, our education is deteriorating.

Our Education System, with its hyper-focus on four-year colleges, has failed its students.

This about one staggering statistic: Over the past 20 years, we have created twice as many Bachelor's Degrees (BAs) as jobs to employ those who have earned them.

More than 40% of recent graduates are underemployed, meaning that they're working in jobs that don't require their degree.

Many graduate programs produce fancy degrees that never return the investment for an estimated 40% of Master's students, particularly those earning degrees outside the sciences, business, medicine and education.

Now, students are getting the message: A survey taken in 2020 found that only a third of undergraduates see their educations as advancing their career goals, and barely one in five think the BA is worth the cost.

The basic reality is this: The upfront investment is high (tuition fees for four-year public colleges have increased by an average of 213% in real terms between 1988 and 2017) - but the return on investment seems to be failing.

It is likely universities may have reached their apogee and are trending down from their high point.

A survey from in 2020 found that only a third of undergraduates saw their education as advancing their career goals, and barely one in five think that a Bachelor’s Degree is worth the cost.

The vast majority of young people prioritize such things as finding a good-paying job over the social uplift and hefty tuitions associated with four-year colleges.

Not surprisingly, overall college enrollment is not simply dropping - it's fallen a full 11% in the past decade.

To Continue Reading This Labor Perspective, Go To: www-newsweek-com.cdn.ampproject.org/c/s/www.newsweek.com/forget-college-skilled-trades-are-future-us-economy-opinion-1715361?amp=1