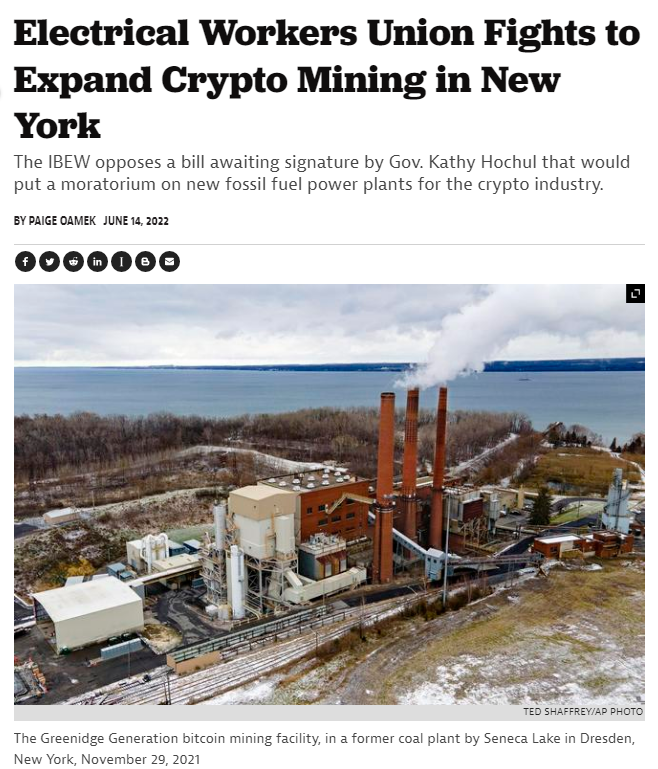 Climate Advocates did have one victory to celebrate - the Legislature voted to impose a two-year moratorium on new proof-of-work cryptocurrency mining powered by fossil fuels, combating an emerging threat to the State’s clean energy goals.

But the bill still needs to make it past Governor Kathy Hochul to become law.

Once the Bill is delivered to her by the Legislature, which typically happens at a time of her choosing, Hochul will have 10 days to sign or veto it.

She has floated delaying her decision until the end of the year, explaining that “we have a lot of work to do over the next six months.”

That gives crypto companies time to influence Hochul’s decision and in the meantime to pounce on New York’s dozens of retired power plants, since the Bill wouldn’t affect already-operating mining centers.

But there is another powerful interest group working to stop the Bill: key sections of Organized Labor.

The initial Mining Bill, introduced in May 2021, called for a three-year moratorium and a more sweeping ban of proof-of-work mining.

When that Bill died in the State Assembly last June, a staffer for its primary sponsor told The Block: “The roadblock was the Unions.”

In particular, the International Brotherhood of Electrical Workers (IBEW), which represents Construction Workers across the State who build and renovate crypto mining centers, has cultivated close ties with the industry and has condemned the moratorium in the past on the grounds of the economic opportunities it would foreclose.

Hochul has echoed their concerns.

“We have to balance the protection of the environment, but also protect the opportunity for jobs that go to areas that don’t see a lot of activity,” she said at a press conference last month.

To Continue Reading This Labor News Report, Go To: https://prospect.org/environment/electrical-workers-union-fights-to-expand-crypto-mining-in-new-york/