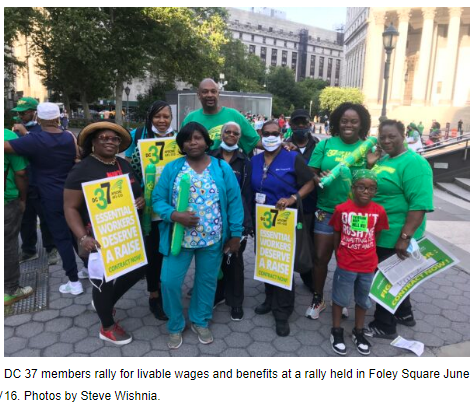 (NEW YORK CITY) - You won’t have much luck trying to pay for groceries by telling the Cashier you’re an “Essential Worker,” American Federation of State, County & Municipal Employees (AFSCME) District Council 37 Executive Director Henry Garrido told several hundred New York City Workers at a rally Thursday (June 16th) that was held in Foley Square before leading a chant of “show me the money.”

The Union’s 100,000 Members, who encompass Clerks, Hospital Workers, Librarians, Probation Officers, Sewage-Treatment Workers and 911 Operators - have been working under an expired contract since May 2021- and negotiations with the City have not yet started.

Money is a big issue.

“We’re not getting the raises that make a difference.  Everything is going up but our paychecks,” District Council 37 President Shaun Francois told LaborPress before the rally.

Francois, who heads District Council 37’s Local 372 - which represents School Employees such as Health Aides, Lunchroom Workers and Crossing Guards, says that what his Members are paid would be a good salary in Georgia, but not in a City where studio apartments cost $2,000 a month.

It would take $30 an hour for a two-person household to have a decent standard of living here, he continued.

DC 37 Treasurer Maf Misbah Uddin, who also serves as President of the Accountants’ Local 1407, laid out the numbers: Under former Mayor Michael Bloomberg, City Workers went 4½ years without a raise; Under Bill de Blasio, they got raises of 1% to 3% a year, compounding to about 18% over eight years, when inflation over the same period was 27%; and This year, inflation is running at an annual rate of 8%.

And “we have more homeless in our Union than ever before,” he said.

The City’s Pension Fund got a 24% return on its investment last year, so there are funds available, he added.

“I love what I do, but we need more pay,” a Sterile Processing Technician at Kings County Hospital in Brooklyn told LaborPress, asking to remain anonymous.

The “Central Sterile” Unit is “the heart of the hospital,” she said. “If we shut down, the operating room shuts down.”

The workers there take used, bloody surgical instruments, wash and sterilize them, and repackage them so they can be used again.

They also fill the “crash carts,” carts full of the equipment needed to resuscitate people going through cardiac or respiratory arrest.

It takes two hours to pack a neo-natal crash cart, she said, which contains things like endotracheal tubes, needed to save babies from suffocating from “meconium aspiration” - defecating in the womb while being born, and inhaling a mix of feces and amniotic fluid.

“We are underpaid,” the woman said.

To Continue Reading This Labor News Story, Go To: www.laborpress.org/dc-37-rallies-for-raises-that-make-a-difference/