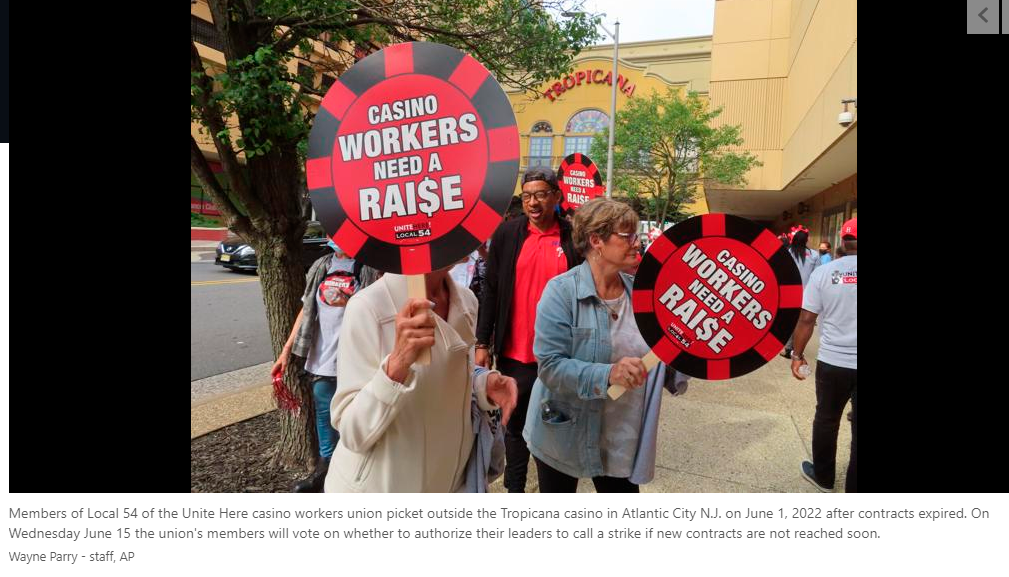 (ATLANTIC CITY, NEW JERSEY) - Atlantic City’s main Casino Workers Union will vote today (Wednesday, June 15th) on whether to authorize a Strike against the City’s casinos, with whom they have yet to reach new contract agreements.

Local 54 of the Unite Here Union says its Members will decide whether Union Leadership can call a Strike against any or all of the nine casinos.

Contracts with the casinos expired nearly two weeks ago, and talks have yet to produce a new agreement.

“We’ve been saying for some time now that Casino Workers need a real raise,” Union Spokesperson Bethany Holmes said. “We’re two weeks past our contract expiration and we’ll continue to try to get there with the companies, but we’re taking a vote this week to put in the hands of the negotiating committee the power to call a Strike, if necessary.”

No target date for a potential walkout has been set, but an obvious date would be the July 4th Holiday Weekend, which is crucial to the casinos’ business plans as one of the busiest times of the year.

A “yes” vote will not result in an immediate Strike.

It simply gives the Union’s Negotiating Committee, comprised of Workers from all nine casinos, the power to call a Strike if and when they see fit.

But it would be likely to increase pressure on the casinos as they negotiate with the Union, which says it is seeking “significant” wage increases in the next contract to help Workers deal with financial setbacks caused by the Coronavirus Pandemic and rapidly rising prices.

The labor dispute comes at an uncertain time in Atlantic City.

The casinos and their on-line partners are collectively making more money now than before the pandemic hit, but the casinos say those statistics are misleading because they get to keep only about 30% of on-line and sports betting money, with the rest going to their third-party partners.

They say that in-person revenue won from gamblers is the crucial metric and not all the casinos have surpassed their pre-pandemic levels.

The Union went on Strike in 2004 for 34 days and walked out against the former Trump Taj Mahal Casino in July 2016, which ended with the casino shutting down in October of that year.

It has since reopened under different ownership as the Hard Rock.

So far, the Union has secured agreements with the Ocean Casino Resort and Bally’s to honor the terms of contracts eventually reached with some of the larger casino companies in town, but no contracts have yet been agreed upon.

To Directly Access This Labor News Report, Go To: https://pressofatlanticcity.com/news/casinos_tourism/union-to-vote-on-authorizing-atlantic-city-casino-strike/article_5f149534-eb2f-11ec-9e83-1fc40fac874d.html