U.S. Postmaster DeJoy âSued Over Postal Vehicle Contract Decision,â Which He Wants Built âNot In A UAW-Represented Manufacturing Facility in Wisconsin, But A Non-Union Plant In South Carolinaâ 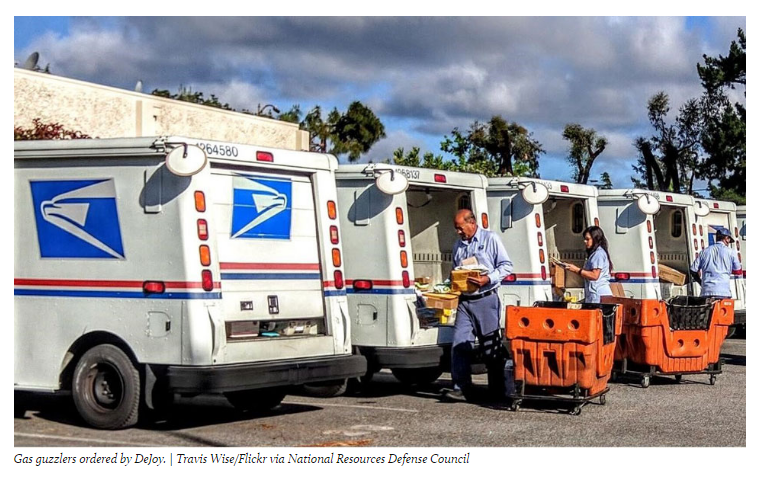 DeJoy’s forced the United Auto Workers (UAW) and a leading Green Group - the Natural Resources Defense Council, to sue him in Federal Court in Manhattan over his plan to buy new gas-guzzling - not electric - delivery vehicles for the Postal Service and its Letter Carriers.

Annual maintenance costs at least $5,000 per vehicle, the suit says.

They also aren’t built to handle the new mix of mail, with more packages.

“This lawsuit claims the Postal Service failed to follow the law when evaluating and finalizing its contract for (the vehicles) and that the contract is based on inaccurate environmental analysis,” the National Association of Letter Carriers (NALC) told their Members in the Postal Bulletin. “NALC is closely monitoring this lawsuit.  Secur­ing new vehicles for Letter Carriers is a top priority and we will continue pushing for the prompt delivery of these vehicles, as well as the funding for them that has been proposed by the Biden Administration.”

Both lawmakers and Democratic President Joe Biden want them to be electric vehicles, to help convert the U.S. away from greenhouse gas-emitting gasoline and diesel fuel, to boost the Electric Vehicle Industry through economies of scale, and because the USPS desperately needs to replace its current fleet.

But DeJoy went ahead and awarded the first contract to Oshkosh Defense for gasoline and diesel-powered vehicles, only 10% would be electric.

Top USPS Official Victoria Stephen admitted to U.S. Representative Alexandria Ocasio-Cortez, (Democrat-New York) that the first batch of vehicles would be built at a new Non-Union Oshkosh plant in Anti-union South Carolina, not at the UAW-represented Oshkosh Plant in Wisconsin.

Non-Union Labor is contrary to what Biden wants too.

“They were granted a $3 billion contract…And then after the ink was dry, it looks like (Oshkosh is) opening up a scab facility in South Carolina with no prior history of producing vehicles in that facility,” Ocasio-Cortez tweeted.

The first pact to Oshkosh includes construction costs for the Carolina plant, the suit notes.

“How did we discover this? @UAW Union Workers, climate organizers and anti-corruption activists came to us with critical information to sound the alarm.  We proceeded to investigate, and when I asked a USPS official about it under oath, this happened: Wow, big admission from USPS official Stephen: Oshkosh Defense told USPS it would move its production from Union Shops in Wisconsin to Non-Union Shops in South Carolina ‘shortly before the public announcement’ of the contract.” Left unsaid: Trump won South Carolina.

The lawsuit is devastatingly caustic about DeJoy’s decision.

It says DeJoy rejected public comments and completely rejected UAW’s objections without saying why or even opening them.

It also says environmental law bars using Environmental Impact Statements “to justify decisions already made,” which is what DeJoy did.

To Continue Reading This Labor News Story, Go To: www.peoplesworld.org/article/trumpite-postmaster-dejoy-sued-over-huge-gas-guzzler-buy/