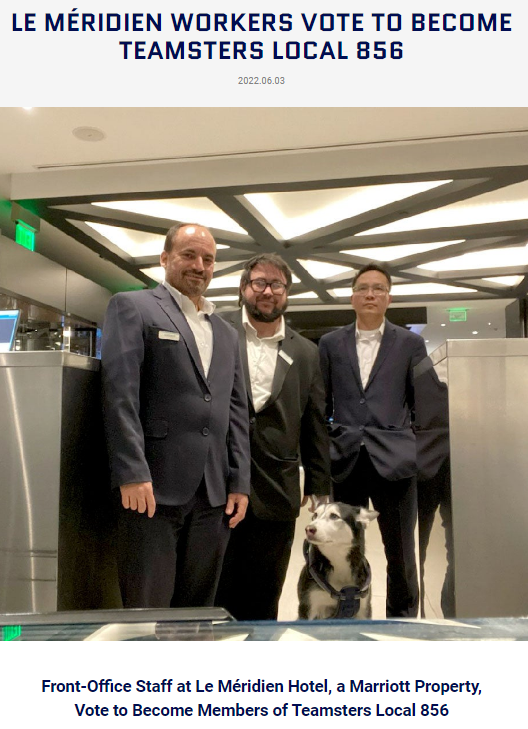 “We are proud of the Front Office Staff of the Le Méridien Hotel who made their voices heard with a resounding ‘yes’ to becoming Teamsters,” said Peter Finn, Secretary-Treasurer of Teamsters Local 856. “Our Local has a proud tradition of representing Hotel Workers in the Bay Area and the Front Office Staff at Le Méridien are now part of it.  We look forward to getting to the bargaining table and winning a strong Union contract for these Members.”

Workers were met with an egregious Anti-Union Campaign with the company hiring a notoriously Anti-Union law firm.

“I am so happy that my Co-Workers and I are able to see our hard work pay off,” said Kelly McKee, a Front Office Worker at the Le Méridien. “We organized our Union and it’s great to see that Le Méridien Front Office Staff will be given the respect and fair treatment we have always deserved.”

“It is a wonderful feeling knowing that the team I work with, and I, will be treated with dignity and respect,” said Alfonso Cano, a Front Office Worker at the Le Méridien. “We will sleep better knowing that as Union Members, we can count on having more job security.  We’re looking forward to gaining justice, equality, improved working conditions and benefits.  Some of my Co-Workers have never been Union Members before and I’m excited they will get to experience being a Teamsters’ Member.”

The Le Méridien Hotel is a property of Marriott International.

Teamsters Local 856 represents Workers employed at more than 50 hotels across the Bay Area, including Hyatt, Hilton and numerous boutique hotels.