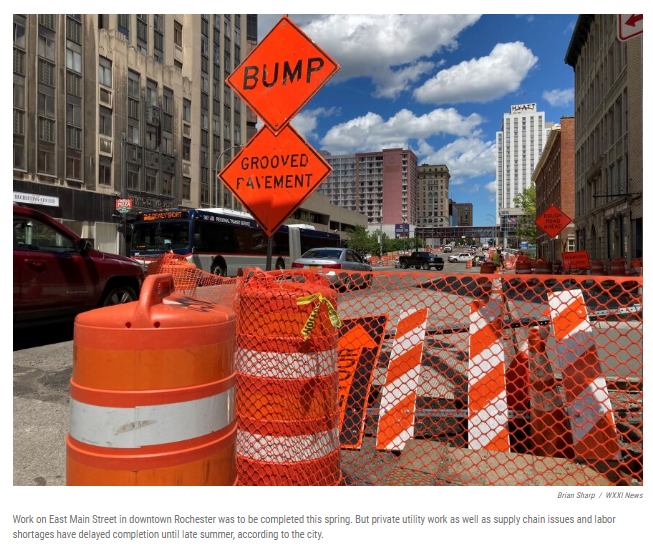 (ROCHESTER, NEW YORK) - Work on East Main Street in Downtown Rochester was to be completed this Spring, but private utility work - as well as supply chain issues and labor shortages, have delayed completion until late Summer, according to the City.

That despite the number of people working construction in the Rochester area is at its highest level on record, New York State Labor Officials say.

Job growth in the Construction Trades is twice that of Private Sector employment overall.

“Certainly, we've seen slowdown on some projects or delays on projects because of materials, but not on the labor side.  But how long will that last?  There's so much work coming,” said Joe Morelle, Jr., who serves as the Executive Director of UniCon - which represents the Construction Industry and Trades in the nine-county Finger Lakes Region.

Already, there are cracks - utility work, supply chain issues and a shortage of Workers are all cited by the city as reasons why the East Main Street Reconstruction Project is taking longer than planned.

And when Morelle talks about what’s coming, he means a barrage of government projects.

Flush with Federal Rescue Plan and infrastructure money, municipalities are pushing a multitude of projects forward.

Monroe County is eying improvements at Frontier Field, an expansion of Seneca Park Zoo and a possible new Children’s Detention Center in Rush.

The City also wants to add space to its Downtown Convention Center.

Then there is all the private development, including a new manufacturing hub in Greece being built by a Canadian firm called Li-Cycle.

That compares to 3.4% for the Private Sector, said Tammy Marino, a Rochester-based Labor Market Analyst with the State Department of Labor.

“Looking forward there remains a fair amount of uncertainty,” Marino said in an e-mailed response to questions.

Construction employment, meanwhile, is projected to slow somewhat in the next decade and trail Private Sector job growth overall - that would be in addition to jobs being created by turnover.

Marino said about 90% of all hiring in the region results from the need to replace Workers, both those who transfer to other occupations or exit the workforce.

“We're trying to encourage more and more kids coming out of high school to get into the Unions, because, you know, there's such a need,” he said.

Union Halls are at full employment, even pulling in Retirees.

Some open shops are raising wages and putting together benefits packages, all to draw in recruits.

“There's not an Organized Union Trade that is paying probably less than ($40) an hour,” he said.

That’s for a Journeyman, who has completed a two or three-year Apprenticeship.

To Directly Access This Labor News Report, Go To: www.wxxinews.org/local-news/2022-06-13/push-is-on-to-fill-construction-jobs-as-major-rochester-projects-loom