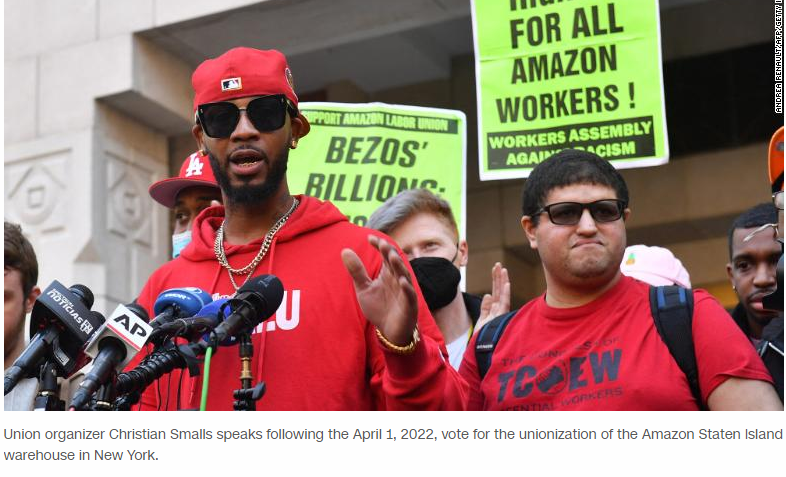 (STATEN ISLAND, NEW YORK) - In the two months since Workers at an Amazon warehouse in Staten Island voted to form the company's first U.S. Labor Union, the Organizers have been on a victory lap.

Leaders for the newly-formed Amazon Labor Union (ALU) have visited the White House, testified before a U.S. Senate Committee, been featured on Time's List of the 100 most influential people and rallied alongside prominent Progressive Political Figures, such as U.S. Senator Bernie Sanders and U.S. Representative Alexandria Ocasio-Cortez.

The fired-Amazon Worker-turned-Union President, Chris Smalls, has also been recognized publicly, both as a Labor Leader and for his fashion sense, with his style written up by The New York Times.

But inside the Staten Island facility, known as JFK8, tensions remain high between the Union and Amazon.

Several Worker/Organizers at the facility have been fired, sparking heated responses from the Union.

Amazon has yet to sit down at the bargaining table with the Union, prompting Senator Sanders and U.S. Senator Kirsten Gillibrand to urge Amazon's CEO to recognize the Union rather than fight it.

And Amazon is currently attempting to have the election results thrown out after filing more than two dozen objections, not only concerning alleged behavior of Union Leaders - but also that of the Regional Office of the National Labor Relations Board (NLRB), which oversaw the election.

The agency has denied Amazon's charges against it.

Amazon pushed to keep the hearing closed to the public, but the Federal Labor Agency ruled against it in a recent filing.

"The Board's hearings are not secret.  Accordingly, preventing the public from viewing its important processes is not an option," the filing stated.

The ALU, meanwhile, has indicated plans to travel to Phoenix to rally for recognition.

The ongoing saga at the facility shows how the surprise victory for the underdog ALU is far from the end of a long battle for collective bargaining between some Warehouse Workers and one of the country's largest employers.

It also points to a playbook Amazon could use with other warehouses, at a time when the Coronavirus Pandemic has heightened concerns among some Employees about working conditions at the E-Commerce Giant.

At Amazon, only a few other U.S. locations have held a Union Election - and, so far, they've failed to successfully Unionize.

"Amazon is not willing to recognize having a Union," said Kate Bronfenbrenner, the Director of Labor Education Research Cornell University's School of Industrial and Labor Relations.

She said the developments at JFK8 reveal major weaknesses in U.S. Labor Laws.

"One of the problems under our Labor Law is that if a company refuses to bargain, the worst penalty is a piece of paper saying, 'Go bargain,'" Bronfenbrenner said.

To Continue Reading This Labor News Report, Go To: www.cnn.com/2022/06/13/tech/amazon-union-jfk8-warehouse/index.html