"We Should Encourage Unions. Iâm Not Just Saying That To Be Pro-Union, Iâm Saying It Because Iâm âPro-American.â" - President Biden âPuts The Focus On Workersâ During Philadelphia Visit To The National AFL-CIO Convention 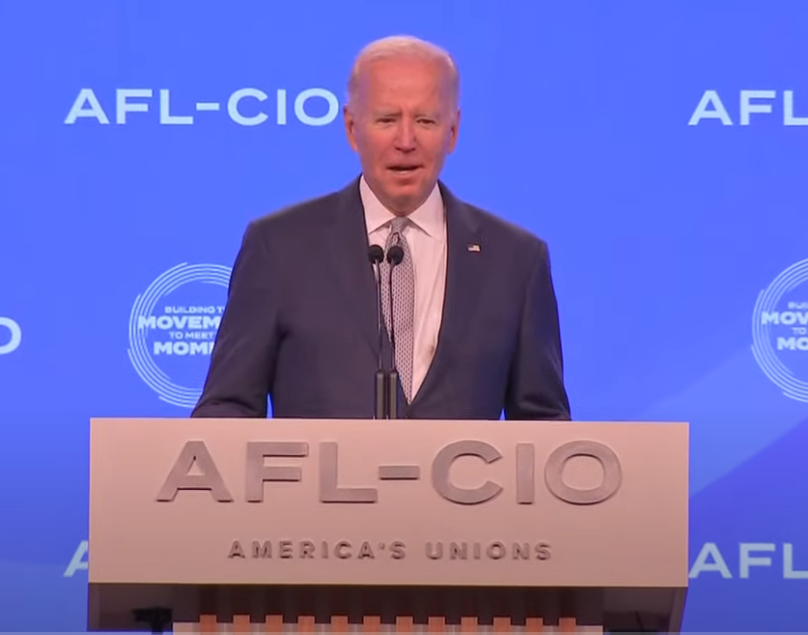 (PHILADELPHIA, PENNSYLVANIA) - President Joe Biden told the largest Federation of Labor Unions on Tuesday (June 14th) that he's working to rebuild the U.S. economy around Workers, an attempt to draw a contrast with Republicans.

"We should encourage Unions," Biden said. "I’m not just saying that to be Pro-Union, I’m saying it because I’m ‘pro-American.’"

The speech before the National AFL-CIO Convention in Philadelphia was the President's attempt to reset the terms of the debate on the economy as Biden’s own approval ratings have slid while consumer prices and the cost of gasoline have surged.

Inflation at a more than 40-year high has caused voters to sour on the economy, despite a recovery after the Coronavirus Pandemic-induced downturn that has led to robust hiring and a healthy 3.6% unemployment rate.

At the convention, Biden reminded his audience of the food lines and layoffs during the pandemic that preceded his Presidency under Republican Donald Trump, contrasting that with the improvements in household balance sheets under his watch.

But even as the economy has quickly amassed jobs, inflation has left many Workers feeling worse off as wages have not kept up with the costs of living.

Biden pointed a finger at the Republican Party, saying the GOP is focused on cutting taxes for companies and the wealthy - and said laws enabling Unionization and boosting child care benefits for families will lead to growth through a stronger Middle Class.

Many Republican Lawmakers have either disowned the proposal or offered caveats, since tax credits are a means of financial support for poorer and Middle Class U.S. Families.

"Republicans have it all backwards - their plan literally calls for increasing taxes on Middle Class and Working People and cutting taxes on corporations and wealthy Americans," Biden said. "I believe in bipartisanship, but I have no illusions about this Republican Party - the MAGA Party."

Despite a decline in Unionization over the years, the Labor Movement still generates much value.

Government figures show the median Unionized Worker earns about $10,000 more annually than a Worker without a Union.

To Directly Access This Labor News Report, Go To: www.fox29.com/news/biden-put-focus-on-workers-during-philadelphia-visit-to-afl-cio-convention