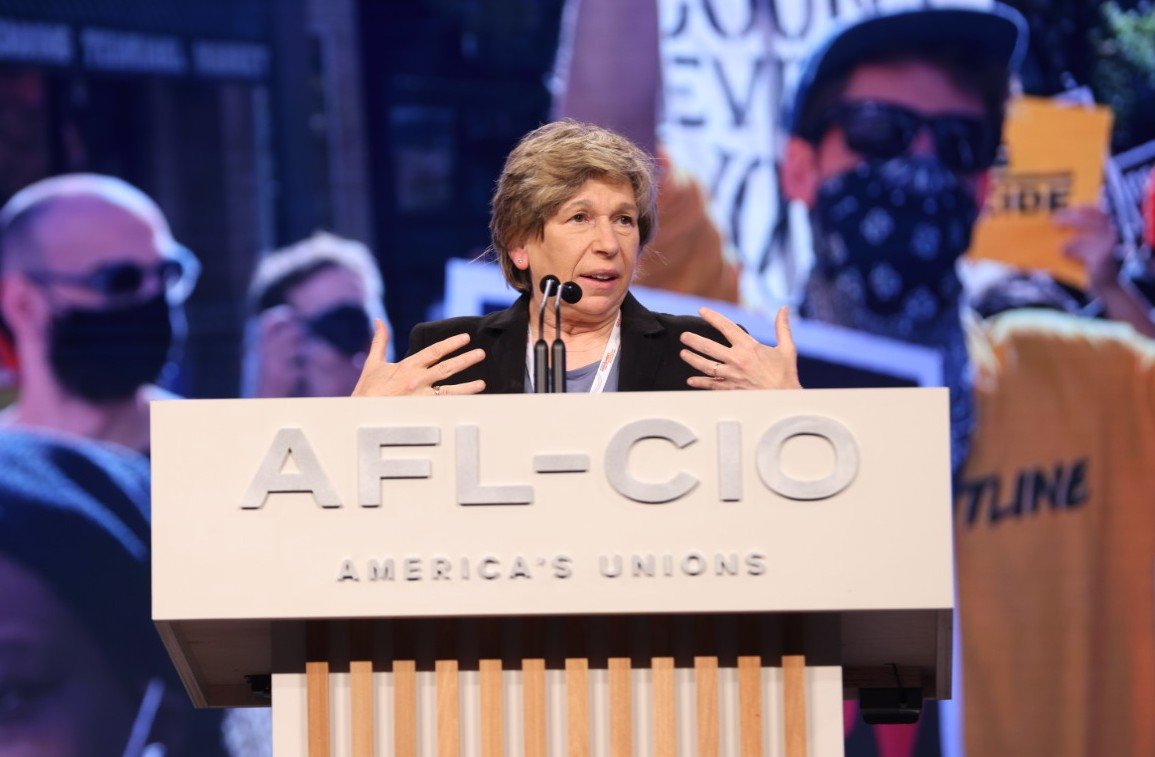 (PHILADELPHIA, PENNSYLVANIA) - Organized Labor’s political campaign this year will be driven from the bottom up, emphasizing issues, as State Federations and Central Labor Councils (CLCs) make the key political decisions and then fit candidates into the issue matrix for endorsement decisions - so says American Federation of Teachers (AFT) President Randi Weingarten, who chairs the National Labor Federation’s committee on relations with and responsibilities of the State Feds and the CLCs.

Weingarten and American Federation of State, County & Municipal Employees (AFSCME) President Lee Saunders are jointly working out that political plan, she told a small group of reporters during a Q&A held at the AFL-CIO Convention in Philadelphia.

The National AFL-CIO and its allies include other big Unions that are independent of the Labor Federation, such as the Teamsters, the Service Employees International Union (SEIU) and the National Education Association (NEA).

Weingarten, National AFL-CIO President Liz Shuler and others who were interviewed said Organized Labor will concentrate on races in key states, including Ohio, Pennsylvania, Minnesota, Michigan, Florida and Georgia.

Other possibilities include Nevada, Arizona, Wisconsin and North Carolina.

All 10 have Governors’ and all but Minnesota have U.S. Senate races.

The National AFL-CIO, like other progressive groups, faces a key election this Fall, with Pro-Worker Lawmakers holding a narrow edge (currently 220-to-208) in the U.S. House and held to a 50-50 tie in the Senate - a deadlock often broken against Workers and their allies by defecting renegade U.S. Senators Joe Manchin (Democrat-West Virginia) and Kyrsten Sinema (Democrat-Arizona).

And while both problem Senators will not face the voters until 2024, enough Senate Democratic incumbents are on the ballot this Fall that a net loss of one seat throws control to current Senate Minority Leader Mitch McConnell (Republican-Kentucky) - a Labor Foe leading a caucus composed mostly of rabid Trumpites.

The switch is also important because the National Labor Federation and members of its 57 Unions, plus several big independent Unions - such as the Teamsters, the SEIU and the NEA -have become key cogs in local, State and Congressional campaigns, at least on the progressive side.

Worker foes rely on a highly-organized structure of white supremacists, Christian megachurches, and mass Right Wing movements, many of them funded by the financial and corporate classes whose interest is in squashing Workers, Women, students and other foes.

And their key tools include disinformation, voter suppression, downright lies and schemes to divert voters’ attention away from the Republicans’ and Trumpites’ existential threat to the future of Democratic Government in the U.S., shown by the January 6th, 2021 coup attempt.

The switch in structure and emphasis is part of “the modernization of the AFL-CIO” that President Liz Shuler, elected by acclamation to her first full term as head of the 12.5-million-Member Federation, is pushing, Weingarten explained.

That modernization, she said – with details to be announced - is supposed to make the National AFL-CIO “better in all of our work,” said Weingarten, a strong Shuler supporter.

“In politics, we are trying something new,” Weingarten continued. “We’re not going to parachute people in (to specific states or races but determine) what community issues we need to solve, who should have our back (on those issues) and who will help us (achieve Workers’ goals).

To Continue Reading This Labor News Report, Go To: www.peoplesworld.org/article/labors-2022-election-work-to-be-driven-from-the-bottom-up/