âIf Itâs Left To The Senior Leadership, The Changes Wonât Occurâ - Wells Fargo Employees âPushing To Organize A Union Across The Third-Largest Bank In The U.S.â 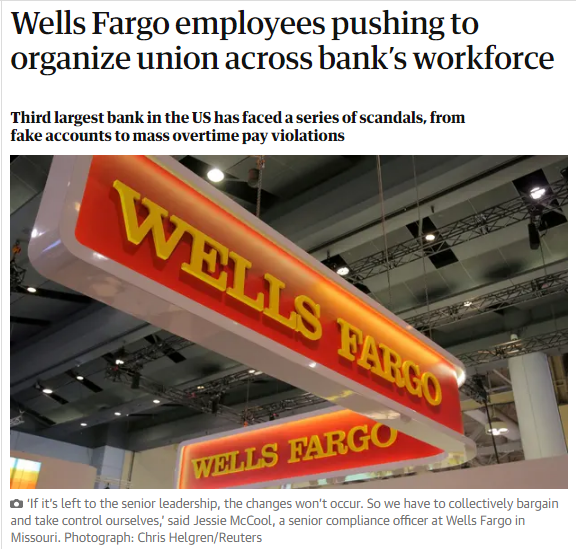 Workers at Wells Fargo - the third largest bank in the United States, are pushing to organize a Union across the Bank’s Workforce with Wells Fargo Workers United, a campaign with the Committee for Better Banks, which successfully won the first Union contract in the Banking Industry in 40 years at Beneficial Bank in 2021.

Wells Fargo has faced a series of scandals in recent years, from the fake account scandal in 2016 exposed by whistleblowers with the Committee for Better Banks, to mortgage and auto loan abuses, adding on products to customer accounts without their knowledge, a lawsuit filed this year alleging mass overtime pay violations and, according to a recent report, the bank has used fake interviews to increase records of the bank’s diversity efforts.

“If it’s left to the senior leadership, the changes won’t occur.  So we have to collectively bargain and take control ourselves,” said Jessie McCool, a Senior Compliance Officer at Wells Fargo in Missouri for about eight years and a Member of the Workers’ Organizing Committee.

McCool started to get more involved with the Committee for Better Banks and joined the Wells Fargo Organizing Committee during the COVID-19 Pandemic, when management culture and working conditions deteriorated further.

McCool said Wells Fargo suffers from management problems including company policies that are applied unevenly or unclear, which often has resulted in enabling discrimination, retaliation or scapegoating of Workers by managers.

She cited a few examples, including being given an informal warning for being distracting when her child was playing in the background of a Zoom meeting, fighting against attempts by management to have Pro-Union message on her e-mail tagline removed, to a Female colleague being blamed in a meeting by a senior vice-president for missing compliance edits on a company brochure that she had made, but were disregarded by the manager.

“A lot of Bank Workers don’t realize we have the right to Unionize, but it’s time that the management committees of our bank heard our collective voices,” McCool said. “We have the ability to rise up collectively and address these policies and their uneven adherence.”

Ted Laurel has worked as an Account Resolution Specialist at Wells Fargo in Texas for nine years and has been involved with the Committee for Better Banks for the past four years, but increased his involvement during the pandemic, which has included organizing and outreach to Wells Fargo Workers on Social Media.

“COVID was another wake-up call on how unfair our policies can be, our unclear processes, the conflicting policies and the uneven application of both,” Laurel said. “When COVID came and safety was a major concern for us, I saw that my Co-Workers were not being treated the same as other Co-Workers, who might have been afforded some safety protocols to not get sick or stay home.”

He also criticized the unfair distribution of wages, with minimum wages between $15 and $20 an hour, a lack of compression wage increases for Workers based on their experience or seniority at the bank, and the lack of compensation and support for Workers who have to transport and uninstall and reinstall desktop computer equipment multiple times a week as Workers are still on hybrid work office schedules.