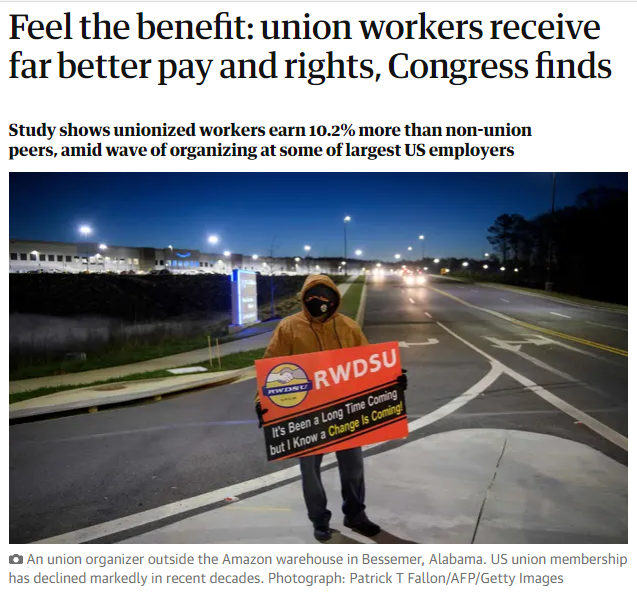 (WASHINGTON, D.C.) - Workers represented by Labor Unions earn 10.2% higher wages than their Non-Union peers, have better benefits and collectively raise wages industry-wide, according to a report released by the House and Senate - and first shared with The Guardian.

The report outlines the economic benefits of Union Membership and was released as the Biden Administration pushes for legislative and executive action efforts to support Workers’ rights to organize.

Labor Unions have also contributed to narrowing racial and gender pay disparities - Unionization correlates to pay premiums of 17.3% for Black Workers, 23.1% for Latino Workers and 14.7% for Asian Workers, compared with 10.1% for White Workers.

“Unions are the foundation of America’s Middle Class,” said U.S. Congressman Don Beyer, who serves as Chair of the Joint Economic Committee. “For too long, the wealthy have captured an increasing share of the economic pie.  As this report makes clear, Unions help address economic inequality and ensure Workers actually see the benefits when the economy grows.”

The Biden Administration’s drive to increase Union Membership comes amid a wave of organizing among Workers at some of America’s largest employers, including Amazon and Starbucks.

But despite the recent uptick in organizing, Union Membership has declined markedly in recent decades, from 34.8% of all wage and salary Workers in the U.S. in 1954 to 10.3% in 2021.

According to several studies, the decline has contributed significantly to increasing wage inequality and stagnation.

The report cites the recent resurgence of the Labor Movement and strong public support for Labor Unions, as a call to action to improve wages and working conditions and support Worker Organizing.

“As Chair of the Education and Labor Committee, I am committed to addressing the decades of Anti-Worker attacks that have eroded Workers’ Collective Bargaining Rights,” Education and Labor Committee Chair Congressman Bobby Scott said. “With the release of this report, I once again call on the Senate to pass the Protecting the Right to Organize (PRO) Act, which would take historic steps to strengthen Workers’ right to organize, rebuild our Middle Class, and improve the lives of Workers and their families.”

To Directly Access This Labor News Report, Go To: www.theguardian.com/us-news/2022/jun/10/us-union-workers-report-congress