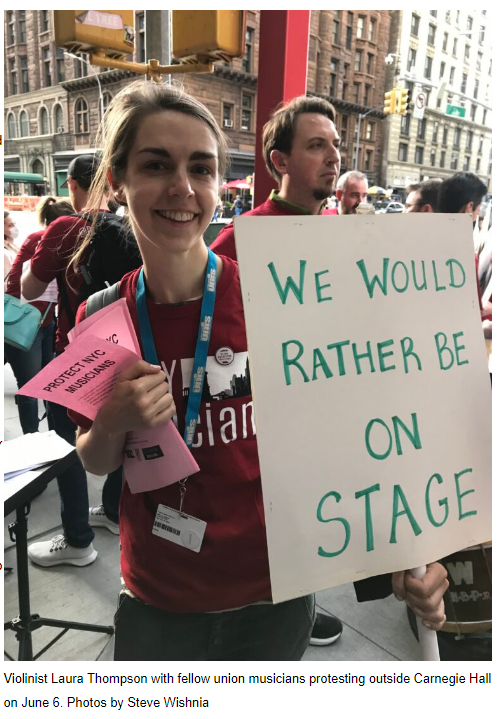 Except they weren’t inside the venerable concert hall - they were outside under a construction scaffold, protesting, they said, because the producer of the night’s concert - Distinguished Concerts International New York (DCINY), has effectively locked them out since they voted to join American Federation of Musicians (AFM) Local 802.

Violinist Laura Thompson carried a sign that read: “We Would Rather Be on Stage.”

“If this can happen at a place like Carnegie Hall to a union orchestra,” said Violinist Tallie Brunfelt, who serves as Co-Chair of the Musicians’ Bargaining Committee.

The DCINY, founded in 2009, typically rents out Carnegie Hall to put on seven to 10 concerts a year.

DCINY typically hires 50 to 80 Musicians to form the orchestra for those concerts, from a pool of about 150 Musicians in the Bargaining Unit.

The Musicians voted overwhelmingly to join Local 802 in the Summer of 2019, he told LaborPress, seeking job security and benefits such as health care and pensions.

“Right now, we don’t have any job security at all,” Blanco said.

Negotiations for their first contract were put on hold when the COVID-19 Pandemic forced the cancellation of concerts in 2020, but since they resumed this year, DCINY management has “rejected almost everything we’ve proposed, and what we’re proposing is standard protections,” Blanco said.

And since DCINY resumed concerts in March, it has not hired any of the Union Musicians.

For its performance of Gabriel Fauré’s Requiem in March, it used what it termed “Guest Artist” Musicians.

For a June 6th concert, of Carl Orff’s “Carmina Burana,” it used two professional Pianists and student Percussionists from a Brooklyn High School, according to Local 802.

“A big piece of why we Unionized in the first place was to try to protect ourselves against retaliatory hiring,” Brunfelt said.

“They’re trying to avoid the Union by going by going to high school students,” he told LaborPress.

And if those students are accomplished enough to play the stage of Carnegie Hall, he added: “They should be paid as professionals.”