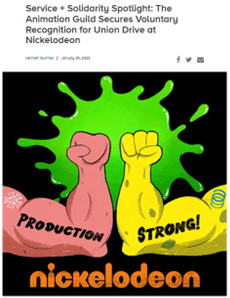 (HOLLYWOOD, CALIFORNIA) - The Animation Guild is making an unprecedented effort to Unionize IT Workers in a new organizing bid at The Simpsons, Family Guy and American Dad!

The Guild (TAG) revealed it is looking to Unionize around 100 Production Workers and IT Workers at all three 20th Television Animation Shows.

While TAG has made a recent push into production roles with unionizing Campaigns at shows like Solar Opposites and Rick and Morty, it has never before attempted to represent IT Workers in collective bargaining.

According to the Union, Workers are in the process of filing petitions for Union Elections with the National Labor Relations Board (NLRB) after “a super majority” initially requested voluntary recognition from management in late May.

The Guild maintains that attorneys representing the shows’ production companies responded by saying 20th Television Animation was not ready to voluntarily recognize the entire group TAG is hoping to represent and asked for more time.

“Those of us who have been working in animation production for many years take pride in knowing that we are an integral part of the longevity and evolution of our shows, right alongside the Artists that we work with,” American Dad! Animatic and Timing Production Supervisor Jason Jones said. “Even though we meet the same tight deadlines and work the same long hours, we (are aware) that we do not share the same basic protections as the Artists we spend those hours with.  We deserve the same respect and dignity as our fellow Union-protected Workers.”

Added The Simpsons Production Manager Ashley Cooper: “It is time we were included in TAG so we can have the same quality health care, pensions and transparency in compensation that our counterparts currently enjoy.”

TAG has been on an organizing blitz since the start of the year, organizing Production Workers on the shows Solar Opposites and Rick and Morty and at the studios Titmouse L.A. and ShadowMachine.

The International Alliance of Theatrical Stage Employees (IATSE) Local also expanded for the first time outside of Los Angeles County in January by winning voluntary recognition at the New York location of Studio Titmouse.

TAG also reached a tentative agreement with the bargaining representative for major film and television studios and streamers on a new three-year contract.

While specifics of the agreement haven’t yet been unveiled, the Guild said it offered wage increases, better terms for Animation Writers, changes to the contract’s language on New Media, the addition of Martin Luther King, Jr. Day as a holiday, and the creation of a Labor-Management Committee tasked with tackling Union-covered remote work.

Members will vote to either ratify or reject the agreement in late June.