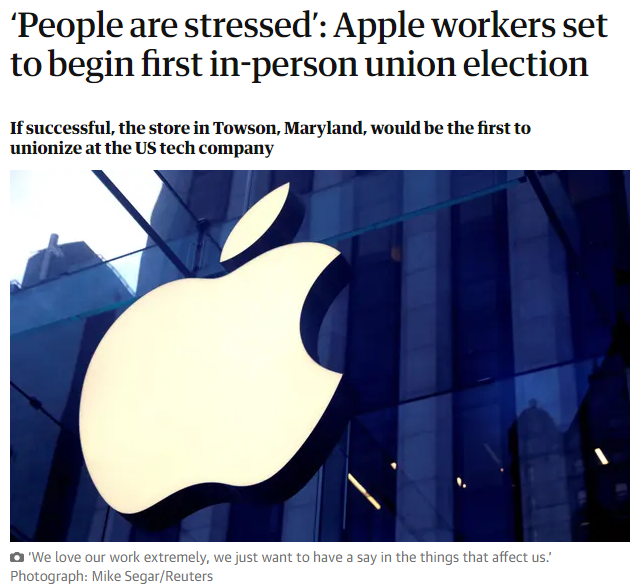 (TOWSON, MARYLAND) - Workers at an Apple Store in Towson, Maryland are set to begin their in-person Union Election on June 15th - and, if successful, the store would be the first to Unionize at the U.S. Tech Company.

Workers at the Maryland store – calling themselves the Coalition of Organized Retail Employees (AppleCore) - went public on May 3rd with their intent to hold a Union Election, with the assistance of the International Association of Machinists and Aerospace Workers (IAM), shortly after an Apple Store in Atlanta filed for a Union Election.

Another Apple store, in New York City, publicly announced a Union Organizing Campaign in April and a Louisville, Kentucky, store announced their campaign in May, but neither has yet filed a petition for an election.

“The people who we have the biggest relationship with, our store leaders, almost have little to no say in what affects the Workers,” said Onye Igwulu, a 24-year-old Employee at the Apple Store in Towson for about one year. “We’re standing up to make a better life for ourselves and our family that we feel we deserve and I think all Workers deserve.  We love our work extremely, we just want to have a say in the things that affect us.”

Eric Brown, an Employee at Apple for two years, explained that morale dropped through the Coronavirus Pandemic, with policies and COVID-19 protections changing unilaterally without input or consultation from Workers, which contributed to Workers seeking to Unionize.

“We’re trying to make changes to actually have a right to a say in our workplace conditions, in how we’re treated, with pay, and policy changes,” said Brown. “There have been so many times where we said: ‘We’ve tried this thing, it doesn’t really work, it’s not going to work now that you’re trying to roll it out again, we think it should be this way.’  And the response is: ‘This is how the company wants it done,’ and then they change it.”

Brown also explained issues with compensation, as some new Employees make more than Workers who are training them, and that the wage rates don’t take into account Workers taking on extra duties, such as being utilized to speak with non-English-speaking customers.

He also argued pay should better reflect the work they do, which goes beyond typical retail work, especially compared with the record revenues Apple has recently reported and billions of dollars in profit.

“If we’re providing those numbers, we’re hitting benchmarks, why are we not getting compensated for that?,” added Brown. “People are stressed out.  COVID has heightened a lot of things, whether it’s positive or negative, we see that on a daily basis.  And we do want to be compensated for that work that we’re putting in.”

Brown argued the Anti-Union efforts in Atlanta provided insight to Workers in Maryland about the tactics Apple would eventually use at their store to try to scare Workers from voting for the Union, which has included Anti-Union presentations, interrogations and hiring the same Union Avoidance Law Firm that Starbucks has retained, Littler Mendelson.