Academy Museum Of Motion Pictures Staff Are Forming A Union 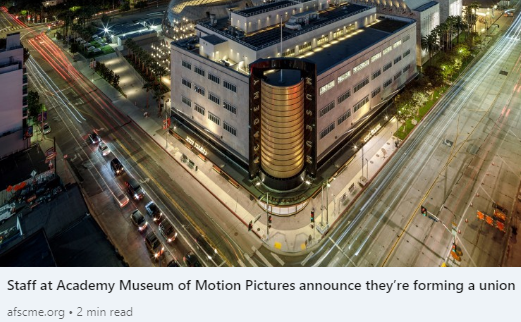 AMWU is seeking recognition from the museum’s management as the exclusive representative for more than 200 eligible Staff.

“We are thrilled to be forming our Union, Academy Museum Workers United, because it is time those who work in preserving and celebrating art, in this case the art of cinema, have a voice on the job,” Museum Retail Sales Associate Sarah Stearn said. “All Workers deserve respect and a say in our working conditions and the direction of our work.  For this museum to be successful, its Workers must be safe and respected.”

After decades of planning, the Academy Museum opened its physical location in Los Angeles’ Miracle Mile neighborhood in 2021.

However, the museum has employed over 300 Staff since the idea of a film museum was sparked almost a century ago, with the creation of the Academy of Motion Pictures Arts and Sciences.

Thousands of Workers have Unionized through CWU over the last few years, including Workers at the Los Angeles’ Museum of Contemporary Art, who recently ratified their first contract, and Workers at the Art Institute of Chicago and the Institute’s affiliated Art School.

In an industry that saw closures and mass layoffs at the beginning of the COVID-19 Pandemic, Cultural Workers have found power through forming a Union, using their unified voice to set industry standards that improve job protections, safety, wages and benefits.

Unionized Staff is nothing new in Hollywood.

Academy Museum Workers United Members are joining Workers in television, film, theater and music who’ve been organized for decades and have used their power as a Union to transform creative industries by setting standards for pay, working conditions, and racial and economic equity.

"We believe in the Academy Museum’s mission to be radically inclusive and we believe in our mission as Staff to be of service and to be agents of positive change in our community,” Museum Assistant Curator J. Raúl Guzmán said. “Through our Union, we believe we can set industry standards for cultural institutions around the world - standards that improve job security, fair and livable wages, and safety for all Workers,”

The AMWU continues to gain support from Museum Workers and plans on filing for a Union Election through the National Labor Relations Board (NLRB) soon - unless the museum grants voluntary recognition.

After receiving recognition, through an election or voluntarily, AMWU Members will begin negotiating a contract with their employer.