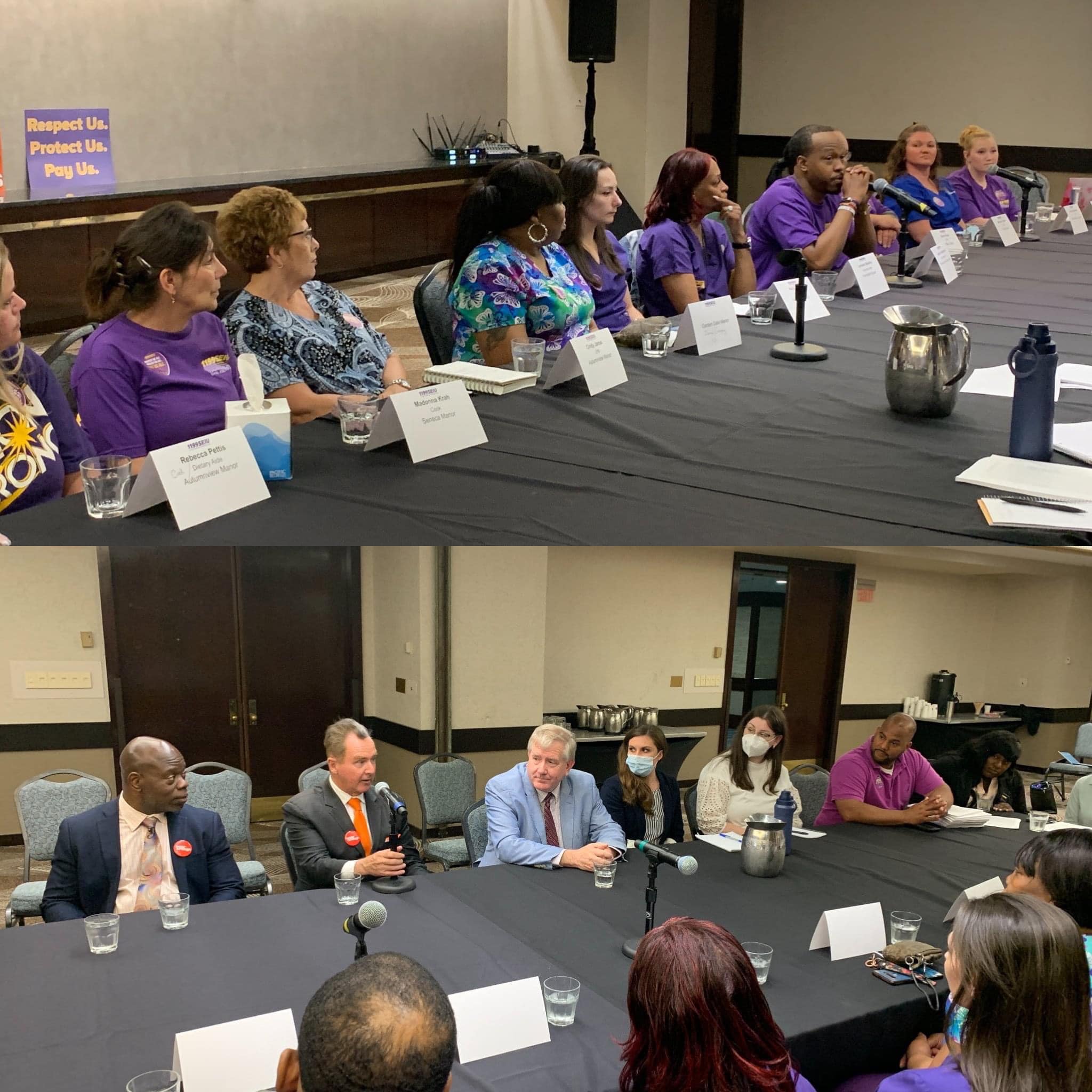 Afterward, the Unionized Nursing Home Workers announced a joint campaign to fight for $15 per hour and standard wage scales.

A round table discussion took place in the Downtown Hyatt Regency Hotel in Buffalo where Donna Gregory, a Certified Nurse Assistant (CNA) at Garden Gate Manor in Suburban Cheektowaga told those elected officials: “I’ve been there nine years and I don’t even make ($15) per hour.  It’s tough and it hurts.  It makes me feel that I’m not worth anything, but I stay for my residents because I love what I do.  Right now, I am the true the definition of living pay check to pay check.”

James Funderburk, an Environmental Services Aide at Elderwood in Suburban Williamsville, said: “We just have the same conversation over and over.  I never thought I would work in an industry where I would make less than other industries while taking care of a human life.”

Another - Cynthia Winkler, a CNA employed at the Autumn View Manor in Hamburg, said: “More and more people are leaving to work elsewhere for more money.”

“1199's Members - Front Line Workers of the first order in nursing homes and similar facilities, have worked tirelessly, before and during the pandemic, and deserve to be fairly compensated," Congressman Higgins said. "(I look) forward to hearing directly from Employees at local facilities about the challenges they face and about the fight for wages sufficient to make certain that our most vulnerable Western New Yorkers will be safely cared for.”

The reforms are meant to improve staffing levels and increase owner’s spending on bed-side Caregivers to provide for residents, but several for-profit nursing homes are fighting against these laws.

In fact, six of the 12 facilities currently in negotiations with 1199 SEIU are participants in a joint lawsuit against New York’s new reform laws that set requirements on spending.

The new Statewide Staffing Law requires nursing home owners spend 70% of their revenue on direct care to residents, 40% of that is to be spent on staffing the facility.

Each nursing home resident should receive a minimum of 3.5 hours of care per day, according to the new Staffing Laws.

Many of these 12 for-profit homes currently do not meet the standard, but could if more Staff were hired at competitive wage rates, the Nursing Home Employees said.

For example, some Workers employed at Elderwood say they care for COVID patients and are earning only $13.20 per hour.

At another for-profit, turnover rates are high.

For example, of the 15 Elderwood facilities located across New York State, 12 facilities report higher than 50% turnover rates amongst Staff, those at the roundtable said.

At least six of the same 15 facilities have low staffing ratios, according to U.S. Centers for Medicare & Medicaid Services.

To date, both Elderwood at Lockport and Elderwood at Williamsville held informational pickets outside of their facilities, but other facilities are likely to follow their peers.

Workers at all 12 nursing homes are asking for similar wage scales and starting wage rates for new hires above the current $13.20 Minimum Wage that other Workers have won in recent settlements, such as Weinberg Campus and The Grand at Delaware Park, formerly Emerald North, Union Officials said.

Weinberg Campus was short-staffed due to lower wages, but Workers were able to win higher starting rates and Weinberg has successfully hired 78 new Workers since January 1st.

Many at Weinberg Campus are now earning at least $15 per hour, well above the Minimum Wage, with increased pay based on experience.

To Directly Access This Labor News Report, Go To: www.1199seiu.org/media-center/nursing-home-staffing-shortages-attributed-low-wages-offered-out-town-profit-ownership-groups