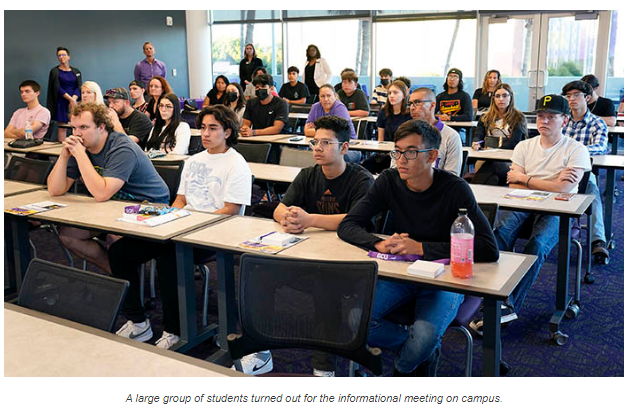 (PHOENIX, ARIZONA) - Traditional universities typically don’t teach the Trades.  They don’t have instruction about construction.  So when Grand Canyon University (GCU) was represented in late April at the Construction Science Technology Apprenticeship Fair at Chase Field in Downtown Phoenix, it turned the heads of attendees.

“When I say they were beyond blown away, it’s an understatement,” said Dr. Joe Veres, GCU’s Vice President for Student Success.

Veres frequently heard something like this: “I can’t believe GCU is doing this.  Finally, a university is stepping alongside the Trades and finding a clear path for them that will support them.”

The path was paved when the Maricopa County Board of Supervisors approved a $669,471 Grant that - with additional funding from Rosendin Electric, enabled GCU to launch a four-course, 16-credit Pre-Apprenticeship for Electricians through the University’s Institute for Workforce Development.

It will be free to about 80 students in the first year, with GCU aiming to sign up at least 40 people for the September opening and another 40 or more in the Spring Semester.

The four courses, designed to be completed in one semester, are: Student Orientation and Electrician Industry Skills; English for Professional Written and Verbal Communication; Math Applications; and Electrical Foundations.

Attendees will be considered GCU students.

If they need help in their studies, they can utilize the Academic and Career Excellence (ACE) Centers.

If they would like to attend Chapel or an athletic event or a club activity, they can do that.

If they’d like to work on campus, there could be opportunities there too.

“They’ll have access to all of our resources,” Veres said.

They also will have access to Rosendin, the largest Employee-owned Electrical Contractor in the U.S., which has more than 7,500 Employees working in 19 offices nationwide.

The students can work for Rosendin while taking the classes, which will count toward the 1,000 hours (approximately six months) of on-the-job training required to qualify for a 5% raise.

Rosendin guarantees another 5% raise after an Employee’s second 1,000-hour stint and those raises are 5% of the Journeyman wage of $32 per hour, not the beginning salary.

“I can’t think of any industry that guarantees a ten-percent raise in that short of an amount of time,” Rosendin Outreach Director Aimee Olmedo said.

Once they complete the Pre-Apprenticeship courses at GCU, they are eligible for entry into Rosendin’s Apprenticeship Program and its on-the-job training in the field.

Stephan Cole, Rosendin’s Workforce Development Trainer, estimates candidates can make $150,000 to $160,000 during the Apprenticeship Program while paying approximately $10,000 for books and other fees.

Just as GCU has taken major steps to try to alleviate workforce shortages for Teachers, Nurses and Social Workers, it is launching this initiative to help fill the need for Electricians.

To Continue Reading This Apprenticeship And Training Labor News Story, Go To: https://news.gcu.edu/2022/06/gcu-unveils-pre-apprenticeship-for-electricians/