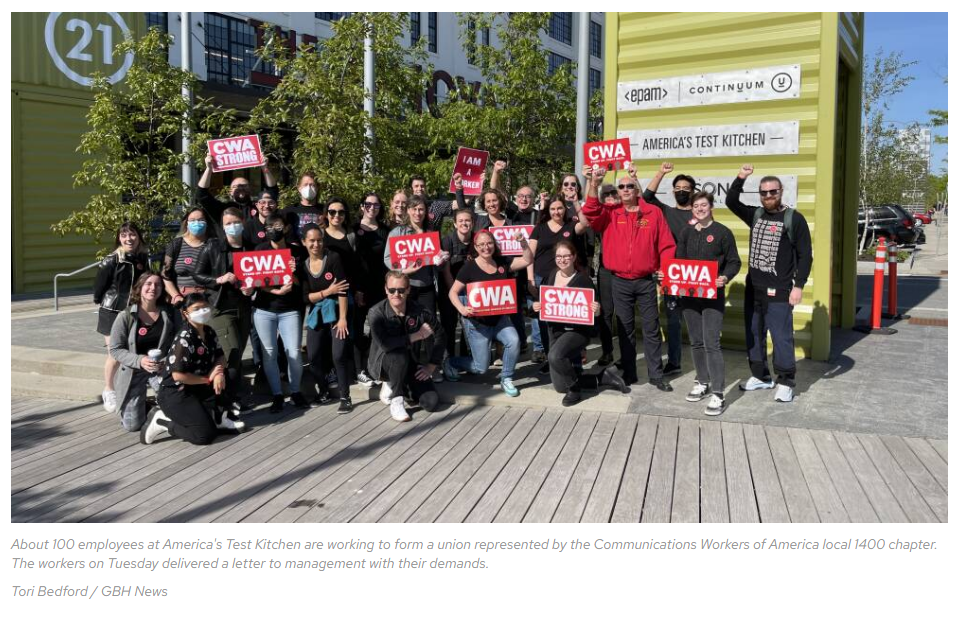 (BOSTON, MASSACHUSETTS) - Afton Cyrus was in her element when she started as a Recipe Tester at America’s Test Kitchen: Braising short ribs in red wine, searing swordfish in Agrodolce Sauce and perfecting the crumb on her date nut bread.

Though the job was a dream come true, Cyrus’ $38,000 salary presents a disconnect between the glamorous, well-stocked kitchens at work and bare cupboards at home.

“There were times I could not afford groceries,” Cyrus said. “I had to make choices in the grocery store about what I could and couldn't buy while I was developing recipes at work I could never afford to make at home.”

Seven years later, Cyrus has joined with about 100 other Employees petitioning to form a Union represented by Communications Workers of America (CWA) Local 1400, which also represents Members of the GBH Newsroom.

A super-majority of non-management Staffers delivered a letter to management demanding higher base pay and salary transparency, lower health insurance premiums and efforts to address “structural inequities” that they say lead to high turnover and understaffing.

For the National Labor Relations Board (NLRB) to hold an election, 30% of Workers need to sign cards or a petition saying they want a Union - Employees at America's Test Kitchen say they have the support of at least 66% of the Workers.

America's Test Kitchen said if the majority of Workers vote in favor of Unionizing, management will bargain in good faith with that Union, but the company appeared to rule out voluntarily recognizing the Union without a vote.

When founder Christopher Kimball left the company over a contract dispute in 2016 and started "Milk Street," a direct competitor produced by PBS and GBH, America’s Test Kitchen moved its more than 250 Employees to a new studio in Boston's Seaport District, where Cooks test recipes between 40 and 60 times.

The typical salary for a Test Cook at America's Test Kitchen ranges from $43,781 to $53,000 per year, according to Glassdoor.com, which provides information about companies.

Salaries for other positions are “opaque and amorphous,” Cyrus says, varying greatly between departments, many of which she says are understaffed.

“It’s a tremendous amount of work, and we’re consistently working twelve- or -thirteen-hour days without additional compensation,” Cyrus said. “Making sure we have enough culinary producers and people to staff the shoots is a massive challenge.”