Published Thursday, May 26, 2022
by Elizabeth Ouzts/EnergyNews.us 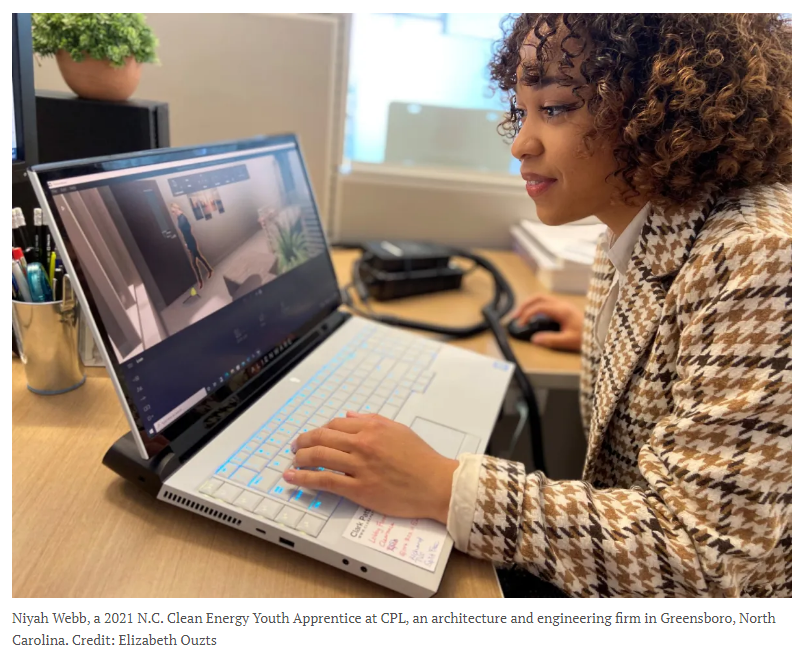 A gifted Artist, she began to study engineering because she longed to work in animatronics.

“I was inspired by a trip to Disney World,” Webb said. “I went to the Avatar exhibit and at the end of the Na’Vi River Journey, there is the most beautiful animatronic I have ever seen in my life.”

But now that she has completed an Apprenticeship Program at a Greensboro, North Carolina Architecture Firm - and still works there part-time while finishing coursework at Guilford Technical Community College - Webb is reassessing.

“I was surprised at how stimulated my mind was when my boss would teach me about energy conservation and how heat moves,” Webb said. “It’s interesting to see where I am now, contemplating: ‘Do I want to be an architect?’”

That’s part of the idea behind the North Carolina Clean Energy Youth Apprenticeship Program: Inspiring young people to consider working in the State’s burgeoning Clean Energy Economy and giving them the skills to follow through.

Now in its third year, the first-of-its-kind initiative is set to double to encompass 60 community college and high school students across eight counties this Summer, from urban ones like Guilford to rural areas like Halifax.

Balu Gokaraju, Associate Professor at North Carolina Agricultural and Technical State University and the project’s pioneer, hopes to expand to 17 counties encompassing 1,000 students in the next four years.

“We have a great framework of bringing the whole state together,” he said.

Just before the Coronavirus Pandemic, the State was home to nearly 113,000 jobs related to the clean energy transition, from solar installers to wind turbine component manufacturers to roles like those filled by Webb in building efficiency.

As the post-pandemic economy recovers and evolves under State policies to shift entirely away from fossil fuels, those jobs are poised to grow exponentially.

Offshore wind power alone could create another 31,000 jobs in the State by 2030, one study by a pair of non-profits found.

“The focus of our industry is really changing,” said Phoenix, who retired last year and now works in the field as a consultant. “The entire discussion is all about carbon reduction.”

CPL, for instance, has formed a committee to help the company refocus on high-performance buildings that use less energy, Phoenix said.

“CPL is not alone,” he added. “Everybody in our business is doing that.  You’re either going to get on this train or you’re going to wind up getting left behind.”

To Continue Reading This Apprenticeship And Training Labor News Story, Go To: https://energynews.us/2022/05/04/in-n-c-clean-energy-apprenticeship-program-set-to-double-this-summer/