Published Wednesday, May 25, 2022
by Kevin Duggan/www.amny.com 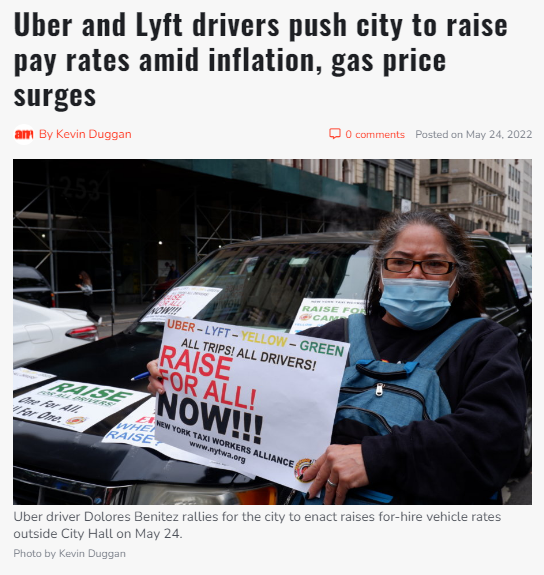 The Union, which Desai said represents about 25,000 Drivers - more than half of whom work for the Ride-Hail App Companies, wants the TLC to raise its rates so that Drivers’ pay is at least $25-an-hour, after expenses, or 85% of what a passenger pays - whichever is higher.

The TLC enacted a minimum rate in 2018 that Uber and Lyft pay their Drivers for each trip based on miles and minutes traveled, and Desai estimated Drivers make less than $18 an hour at current levels.

“We are not leaving these streets until we win a dignified raise, until every single driver is able to take home ($25) per hour after expenses,” she said. “The money is there, it is long overdue to the Drivers.”

Mayor Eric Adams raised the rates by 5.3%, starting in March, which is in line with the rise of the Consumer Price Index (CPI) in New York between 2019 and 2021, but runaway inflation and gas costs mean Drivers are struggling to make ends meet.

“Everything has gotten so expensive,” said Dolores Benitez, who drove a Yellow Cab for 30 years before switching to Uber in 2014.

Benitez said she has to also shell out for car repairs, gas and cleaning the vehicle, along with tolls - which she gets back afterward, but can be a steep up-front cost.

Gas prices in the New York Metropolitan Area averaged $5.02 per gallon Tuesday, a record number that was up almost 60% from a year ago when the cost at the pump was $3.2, according to the American Automobile Association (AAA).

The March rate hike didn’t account for the added costs for Professional Drivers like Benitez, according to a lawyer for the Taxi Workers Alliance.

“Household expenses - groceries, rent, clothing - went up (5.3%), but cost of a car in the last year, vehicle expenses of a new car, went up (12.2%), fuel went up (65%) just in one year,” Zubin Soleimany said during TLC’s Tuesday hearing. “This is so completely divorced from cost of groceries and so much more significant, that needs to be accounted for separately.  TLC needs to completely reassess what the costs in the industry are when setting a new baseline rate for vehicle expenses.”

To Continue Reading This Labor News Story, Go To: www.amny.com/news/uber-and-lyft-drivers-push-city-to-raise-rates-amid-inflation-gas-price-surges/