A Conversation With United Food & Commercial Workers Local One President Frank DeRiso On The May 14th Racist Shootings At A Tops Supermarket In Buffalo: ââIt Makes You Sick.â âI Cannot Fathom That People Can Be So Hateful.ââ 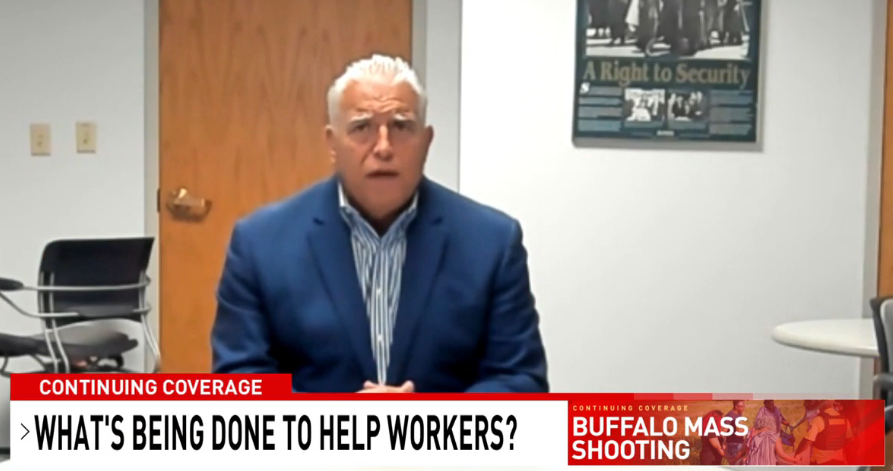 At 2:30 p.m. on Saturday, May 14th - Frank DeRiso was in the backyard of his home, a proud and beaming parent, watching photos being taken of his 18-year-old son and his date who were going to their high school prom.

Then, his telephone rang.

It was from a United Food & Commercial Workers’ (UFCW) Representative in Buffalo, notifying him that there had been a mass shooting at a Tops Supermarket on the City’s East Side.

“‘Oh my God, my first thought immediately was that (the shooter) must have killed a lot of our Members,’” DeRiso, who heads UFCW Local 1 across New York State, told WNYLaborToday.com of his initial reaction to hearing the news.

The Oriskany, New York-headquartered UFCW represents Tops Workers employed across Western New York, including the ones who work in Tops’ Jefferson Avenue store.

“I called Mark (Manna, UFCW’s Buffalo area Representative) ‘immediately’ and told him and our area Reps to get down there (Jefferson Avenue) ‘immediately (after being notified of the shooting) and do whatever we could do,’” he said.

Payton Gendron, 18, reportedly drove several hours from his Binghamton area home to the Jefferson Avenue Tops Supermarket and - dressed in military garb with bullet-proof armor, proceeded to carry out a murder spree with an automatic weapon on that fateful afternoon, killing 10 people and injuring three others before he was talked into surrendering by Buffalo Police.

Three Tops Store Associates were injured in the attack: Christopher Braden, 55, of Lackawanna; Zaire Goodman, 20, of Buffalo; and Jennifer Warrington, 50, of Tonawanda.

DeRiso quickly traveled up to Buffalo and spent the next several days in The City of Good Neighbors, making sure his UFCW/Tops Members were doing okay and that they were getting whatever they needed - including counseling.

“We had a list of Grief Counselors for them to talk to,” DeRiso said.  “‘It’s going to be tough’ (for his impacted Members to recover).  ‘One of them told me all they can remember (is the shooter) shooting someone in the head.’  ‘You know, we train our Military to deal with this stuff’ - ‘it’s PTSD (Post Traumatic Stress Disorder), but (our Members) will suffer from seeing these things.’”

Looking back now, DeRiso told WNYLaborToday.com that the carnage “could have been worse” had it not been for the efforts of Retired Buffalo Police Officer Aaron Salter, who was employed as a Security Guard at the supermarket.

Officials say Salter confronted the shooter and engaged him in gunfire, but his bullets did not penetrate the body armor the shooter wore that day.

However, those precious seconds enabled others within the store to scramble to safety.

Now that he has had some time to reflect on what happened, DeRiso told Your On-Line Labor Media Outlet that he “cannot believe” there is “so much hate” that would convince a person, including one so young, to carry out such a horrific act.

“I listened (to the Tops’ Workers) stories.  ‘It makes you sick,’” he said. “I ‘cannot fathom that people can be so hateful.’  ‘And I don’t understand this white supremacy.’  ‘I can’t believe it exists.’  All these politicians and FOX News (repeating a message of replacement theory that some in this country truly believe is happening) ‘and no one stepping up to say it is wrong.’”

So, where does the UFCW, its Membership and Tops go from here?

As far as the reopening of the Jefferson Avenue Store, DeRiso said “everything is up in the air.”

“We ‘don’t know,’” said DeRiso (Pictured below, addressing a rally in the fight for Essential Worker/Hazard Pay that took place outside a Tops Supermarket on Elmwood Avenue in Buffalo in August 2020) of the supermarket, which is the only supermarket in an area described as a food desert. 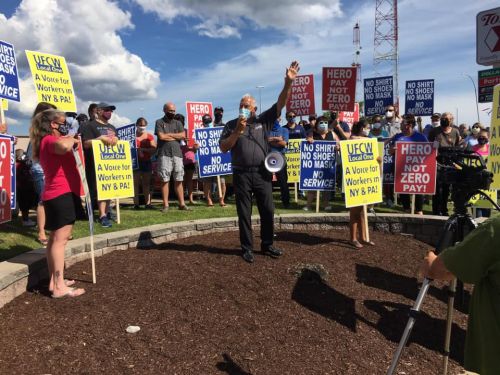 Unfortunately, shootings at supermarkets in this country is not a unique occurrence.

According to Supermarket News, the mass shooting at Tops came just over a year after a pair of other supermarket shootings: In April 2021, a gunman killed one Employee and wounded two others at a Stop & Shop Store in West Hempstead, New York; And less than a month earlier, a lone shooter entered a King Soopers Supermarket in Boulder, Colorado and killed 10 people, including a Police Officer, three Store Employees and an Instacart Personal Shopper.

In terms of mobilizing the Union’s many strengths, lobbying Elected State Leaders has been something the UFCW “has always done” and will use their power in terms of working toward securing real and beneficial gun control legislation aimed at keeping weapons of war out of the hands of people like the 18-year-old from the Binghamton area who brought his hate to Buffalo.

“We will ‘continue’ to lobby, ‘but I thought after the Sandy Hook (Elementary School in 2012) shooting where twenty little babies were mutilated (by a shooter who also used an automatic weapon) that it would change, but it didn’t.’  ‘There has to be legislation that confronts these people with such hate in order to make sure it doesn’t happen (again),’” he said.

DeRiso said he also had the opportunity to speak with New York Governor Kathy Hochul, a Buffalo area native, and President Joe Biden - who traveled to Buffalo to pay his respects to those who were killed and injured, as well as their families.

“I told Governor Hochul ‘we are on board’ (with anything that needs to be done in regards to gun control).  The President ‘thanked’ the UFCW ‘for doing what we could to represent our Members.’  He was ‘heartbroken.’  Our Members are ‘Essential’ Workers who worked through COVID.  They are ‘Front Line’ Workers ‘and here this guy walks in and causes such damage,’” he said.

But an emotional DeRiso did not hold back, blaming former President Donald Trump for stoking the fires of racism with his “there were good people on both sides” when white supremacists marched with torches in Charlottesville a couple of years ago chanting “Jews will not replace us” and his failure to condemn the actions of the racist Proud Boys Group.

For More, Read WNYLaborToday.com’s May 20th Labor News Story, Headlined: UFCW Local One, Which Represents Employees Who Survived The Racist Massacre At The Tops Supermarket On Buffalo’s East Side, ‘Is Stepping Up To Help Support Them’