Published Tuesday, May 24, 2022
by Ralph Palladino Via LaborPress 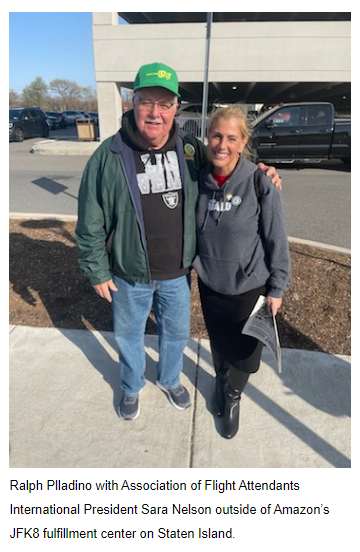 LaborPress Editor’s Note: Ralph Palladino is a retired 42-year Veteran Union Leader from Clerical Administrative Local 1549/District Council (DC) 37 American Federation of State, County & Municipal Employees (AFSCME) in New York City.  For 21 years he served as Local 1549 2nd Vice President overseeing Political Action/Advocacy, Shop Steward Training and Internal Organizing.  He played a key role in organizing Metro Plus HMO Workers into Local 1549.  He is now a Member of the DC37 AFSCME Retirees Association and has published articles in various publications including: The New York Daily News, The Staten Island Advance, The Asbury Park Press, The Los Angeles Free Press, The Coaster, the Mayor of New York’s website, LaborPress, and Labor Notes on issues of politics, racism, immigration and Organized Labor.  He was also the Editor of the Local 1549 Members in the Know and Shop Stewards in the Know Newsletters.

The recent organizing victories at Amazon and Starbucks were won by Workers who acted themselves in fighting against abusive management, rather than by paid Staff Organizers sent in by existing Unions.

They reminded me of reading about the Shop Floor Organizing of the CIO Unions in the 1930’s.

I would like to share my experiences of doing similar grassroots organizing as a Member of DC37 where I worked.

This approach is key to Labor’s revival.

In 1979, I began working at Bellevue Hospital through the Comprehensive Employment Training Act (CETA), a Federally-funded jobs program that placed laid off Private Sector Workers into City and State Government jobs.

The program, however, was losing its Federal funding so, all CETA Workers in New York were facing layoffs.

We began organizing to save our jobs.

Technically, we were Members of DC37 AFSCME, but we had to fight on our own against the cuts and layoffs.

We organized city-wide rallies and at some work locations - including Bellevue, we formed Worksite Organizing Committees.

We stopped most of the layoffs with the help of our Union, which finally joined us when they saw our organizing success.

The CETA fight was going on at the same time the city decided to close some public hospitals in Poor Communities of Color.

A city-wide coalition was formed to fight the closures.

I formed a Bellevue Committee to organize Members to take part in that battle.

I was elected as a Shop Steward in Clerical Administrative Local 1549 DC37 after one year of employment.

I was seen as a fighter because of my CETA and hospital closure organizing.

In contrast to the older Stewards’ lackadaisical approach to handling Members’ problems, I began responding to every issue presented by Members in a thorough and timely way.

I recruited the most boisterous and fearless people to become Shop Stewards, even Members who were the most critical of the Union.

When I first came to Bellevue only five or six Local 1549 Members attended our lunch time meetings.

Within a year after I became Chief Steward, these meetings had 100 to 150 Members.

To Continue Reading This Labor Perspective, Go To: www.laborpress.org/how-to-strengthen-the-labor-movement-my-union-experience/