Published Tuesday, May 24, 2022
by Nicholas Anway/OnLabor.org 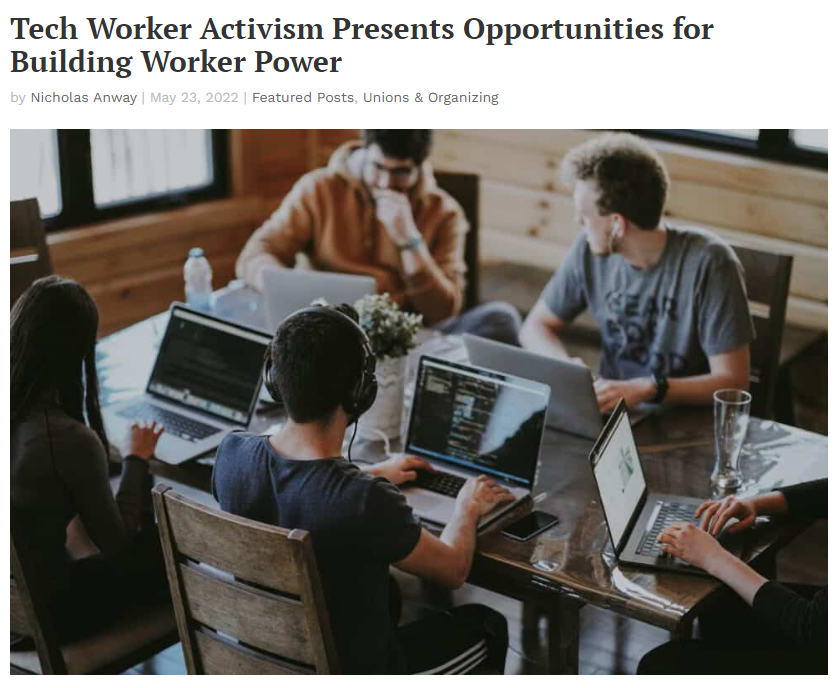 More than 80% of the workplace actions taken by Tech Workers in the past decade have occurred since 2019, according to a recent report from Collective Action in Tech, an organization that documents Worker Organizing efforts in the Tech Industry.

That’s an astonishing figure compared to 2012, when they engaged in only one.

Tech Workers are Employees of firms that provide technology-based goods and services and they’re a diverse collection of Workers that extends far beyond the black T-shirt-wearing archetype that the term often invokes.

Perhaps that’s why Collective Action in Tech’s report divides Tech Workers into two sub-categories: Those who work in office jobs (Office Workers) and those who do not (Non-Office Workers).

At first blush, the distinction may seem arbitrary.

At Amazon, for example, operations Analysts and warehouse Workers are Employees of the same company, even if they don’t share the same workplace.

But the Office/Non-Office Worker distinction highlights an important fissure between the issues that have animated Tech Workers in the recent boom.

Despite this distinction, both Office and Non-Office Tech Workers have been taking action at record rates.

This visualization was recreated from Collective Action in Tech’s report.

According to the report, the post-2019 boom has been driven by three forms of activism: Whistleblower actions, Informal collective actions and Unionization.

Although the rate of Tech Worker Unionization remains below the National Union Membership rate of around 10%, 2021 was an historic year for Unionization in the Tech Industry.

In January, Office Workers at Google formally launched the Alphabet Workers Union, following a campaign with Communication Workers of America (CW), an affiliated Union of the National AFL-CIO.

The Unionization trend has continued in 2022 for both Office and Non-Office Workers.

In March, Workers at The New York Times formed the largest Tech Union in the country when they voted to certify the Times Tech Guild in a National Labor Relations Board (NLRB) Election.

At Activision Blizzard, Workers have also filed for a Union Election with the NLRB, the outcome of which Microsoft has pledged to respect as it acquires the Video Game Company.

Apple Store Employees are also working to Unionize in at least two locations.

And in March of this year, Amazon Workers at a Staten Island Fulfillment Center made history when they voted to become the Amazon Labor Union, the first Amazon Workers Union in the United States.

To Continue Reading This Labor News Story, Go To: https://onlabor.org/tech-worker-activism-presents-opportunities-for-building-worker-power/