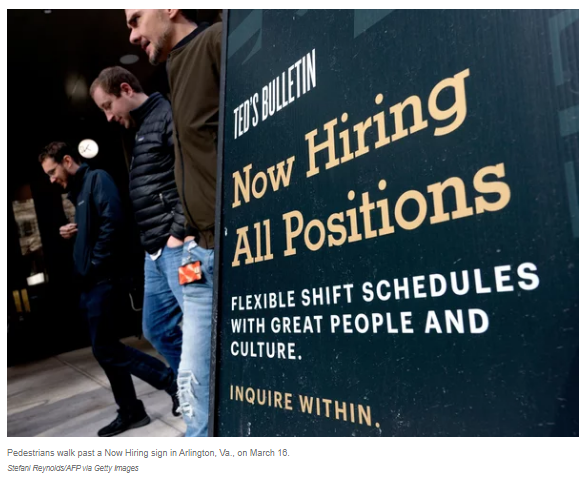 (WASHINGTON, D.C.) - A new Economic Policy Institute (EPI) report finds the average wage grew 4.4% in the first year of the Coronavirus Pandemic and fell 1.7% in the second year.

While the shift may seem dramatic, the numbers are part and parcel of the Pandemic Labor Market that has distorted our picture of wage growth - and one key takeaway from the report is that wage levels remain vastly unequal across the U.S. Labor Market with disparities among Workers by wage level, gender and race/ethnicity remaining stark.

The distortion in wages reflects the types of jobs and wages that were lost initially during the pandemic.

Because low-wage Workers lost their jobs in disproportionate numbers in 2020, the average wage shot up - making it look like we were experiencing historically high wage growth.

When many of these Workers re-entered the workforce in 2021, the average wage fell.

“Even with the faster wage growth among Lower Wage Workers in the last year, wage levels remain vastly unequal across the U.S. Labor Market,” said Elise Gould, Senior Economist at EPI and Co-Author of the report. “Nearly thirty million Workers were paid less than ($15) an hour last year.  Further, the regression-adjusted gender wage gap hasn’t seen much improvement in twenty five years, while the Black-White wage gap has worsened over that time.”

Younger Workers, Women Workers, Workers with lower levels of educational attainment, and Black, Hispanic and Asian American and Pacific Islander Workers faced far greater job losses than other groups during the economy’s pandemic-driven contraction, according to the report.

Policymakers should enact Labor Market Policies - such as raising the Federal Minimum Wage and protecting and strengthening Workers’ Rights to bargain collectively for higher wages and benefits - so that Low Wage Workers can sustain and build on their recent gains, the EPI said.

To Directly Access This Labor News Report, Go To: www.epi.org/press/new-report-measures-wages-in-the-pandemic-labor-market/