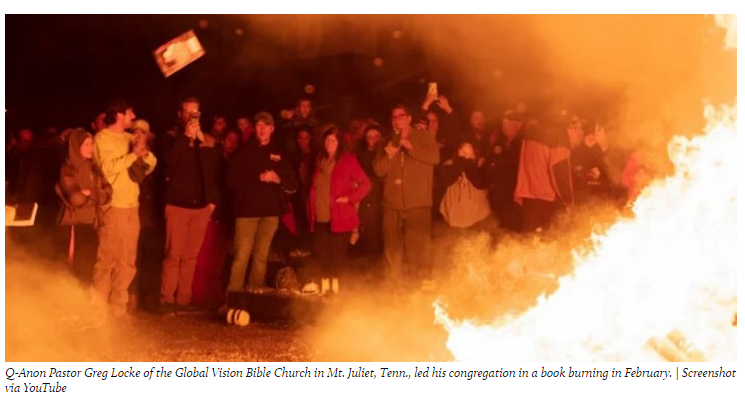 (WASHINGTON, D.C.) - It’s not quite the book burning, yet, of Nazi Germany before World War II, but white supremacists are on a crusade to ban books from libraries and schools around the U.S. and the American Federation of Teachers (AFT) are co-leading a coalition to stop them.

The Right’s book censorship campaign, one of numerous suppression drives it has launched, prompted AFT and the American Libraries Association to create the Unite Against Book Bans Coalition (www.uniteagainstbookbans.org).

Another 24 groups have joined them, so far - including major publishers and the Human Rights Campaign Fund.

The Libraries Group documented another 729 cases of Rightist attempts to ban a total of 1,597 titles from public library shelves.

The Right also targets titles that discuss all of U.S. History, including its flaws.

One flaw, an Internet search shows, was from the U.S. State Department during the McCarthy-era Red Scare that had overseas U.S. Embassy and Cultural Libraries burn books discussing Communism, the New Republic reported - in 1953.

The top three dealt with gay rights and gay marriage.

Others included the book spinoff from The New York Times’ 1619 Project and books about Black Lives Matter.

A 16-page list of books being banned from Texas schools includes a biography of murdered gay San Francisco Supervisor Harvey Milk and Wait, what? - A comic book guide to relationships, bodies and growing up.

“While it’s uncomfortable to talk about tough issues like genocide, slavery and racism, reading honest history helps kids learn the good and the bad about our country and emerge as well-informed, engaged citizens of the world,” Weingarten said at the Coalition’s start.

While Weingarten didn’t say so, Christian Fundamentalists have fought the right to think for over a century.

The Volunteer State outlawed teaching of Darwin’s theory of evolution and ordered teaching only the Biblical story of creation.

Reading widely “helps us dream, helps us create, and helps us access opportunity,” Weingarten said. “Whether you’re a kid in rural West Virginia, in the suburbs of Texas or in a shelter in New York City, opening a book means you’re opening the world.  But reading is hard without books.”

To Continue Reading This Labor News Story, Go To: www.peoplesworld.org/article/teachers-battle-white-nationalist-crusade-to-ban-books-from-libraries/