Despite Being Separated By 23 Miles, IBEW Local 2104âs Niagara Falls Membership Holds Vigil To Honor Those Killed By A Racist Gunman At A Tops Supermarket On Buffaloâs East Side - Union To Start Weekly Food Drive To Aid Impacted East Side Community 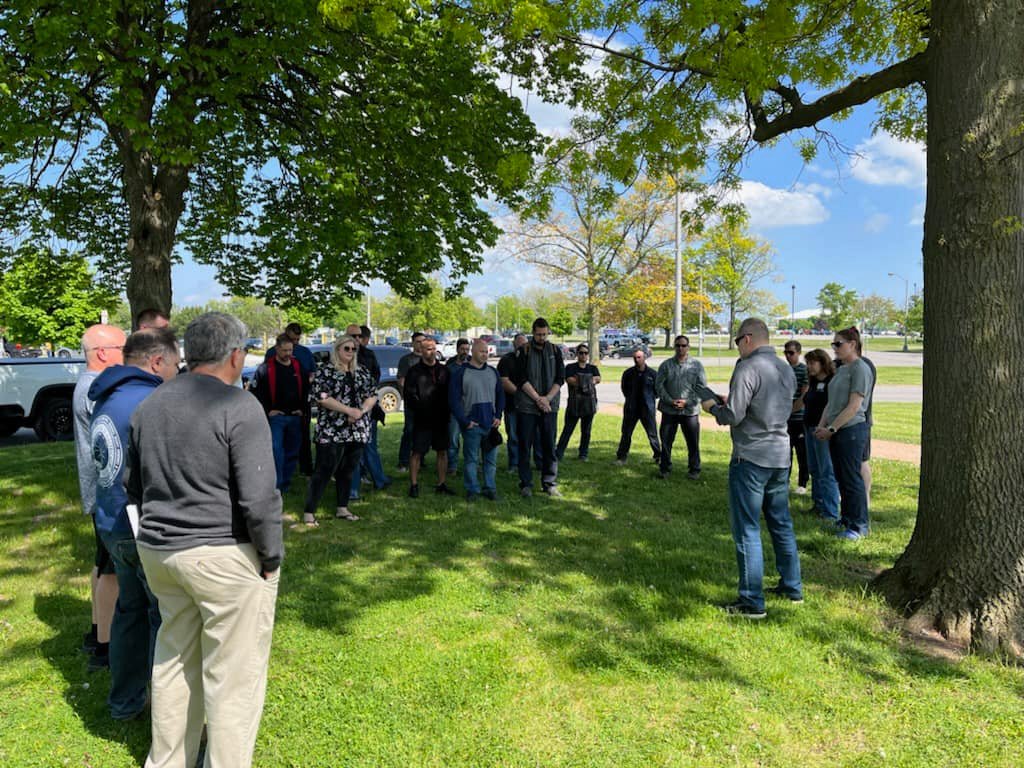 WNYLaborToday.com Editor’s Note: Pictured above, Representatives and Members of International Brotherhood of Electrical Workers (IBEW) Local 2104 - who were joined by Representatives of IBEW Local 237, held a prayer vigil in Niagara Falls late last week to honor those killed and injured by a racist gunman at a Tops Supermarket on Buffalo’s East Side earlier this month.   (IBEW Local 2104 Photos)

(NIAGARA FALLS, NEW YORK) - A 28-minute/23-mile drive separates Niagara Falls from Jefferson Avenue on Buffalo’s East Side, where a racist shooter recently took the lives of 10 African-Americans and injured three others, but for International Brotherhood of Electrical Workers (IBEW) Local 2104’s Membership there is no separation when it comes to standing up for what is right and taking the time to honor the lives of those who were taken.

And, out of a prayer vigil held late last week outside the New York Power Authority’s (NYPA) Niagara Power Project where Local 2104’s 212 Members are employed, came a second move - starting a weekly food drive to help those who live in the affected food desert where its only supermarket has been closed as authorities finalized their investigation of a crime scene and Tops Supermarket management decides what it will do before reopening the store in one of the region’s highest areas of poverty.

“People are ‘very upset,’” IBEW Local 2104 Executive Board Member Curtis Masich told WNYLaborToday.com after the prayer vigil that attracted some 40 people, including Representatives of IBEW Local 237 in Niagara Falls. “This ‘hits close to home.’  ‘Of course we would rather be there (on Jefferson Avenue to pay their respects), but we want to continue to help (those in the African-American Community) who are in need.’  ‘We have People of Color in our Union and we want to set a different tone.’”

Trevor Ganshaw, Local 2104’s Executive Board Chairman, told Your On-Line Labor Newspaper: “We ‘can’t believe there is (so much) hate.’  ‘Hopefully people will begin to act (better) to one another.’  ‘And, we have to speak out against (such hate).’  ‘This is going in the right direction toward better race relations.’  ‘You might lose a friend over it, but it’s time for serious’ discussions.  ‘I feel good our Members stepped up and wanted to do something.’” 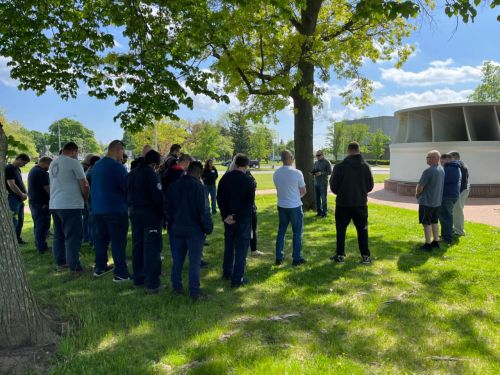 Out of conversations Local 2104’s Membership has had, Union President/Business Manager Lou   Fazzolari told WNYLaborToday.com that the Membership has agreed to collect a variety of food on a weekly basis and transport those donations to those living in the Jefferson Avenue neighborhood where the Tops Supermarket is located.

Fazzolari, who reached out to Pastor Lou Perez of Destiny Christian Church in Niagara Falls to lead the prayer vigil, delivered the following statement in a shaded, grassy section of land located just outside the Niagara Power Project’s headquarters:

Today we gather to take a moment to remember the devastating tragedy that happened this past Saturday in Buffalo.

Our hearts go out to the victims’ families.

By coming together here - we as Brothers and Sisters from Unions across the county, we stand against the murdering of innocent lives.

There is no place in our society for this hate and violence.

These innocent people went to buy bread and milk - something that everyone here has done countless times.

They left their homes without any thought that they were never going to return to see their loved ones and families - that this was going to be their last day on this earth.

Everyone who was at that store on Saturday was not prepared for what was to happen.

Nobody willingly went to the market thinking that a violent death was waiting for them or the Security Guard who tried stop this unspeakable act of violence and gave his own life, trying to defend his friends and neighbors that day.  He is a hero and he never expected to go to work and die that day.

This is why we (have) gathered together - we stand as one voice, one people to say that we care, we are carrying a hurt inside of us for the families that are suffering today.

This loss is shared by everyone.

The families that are left behind are just devastated over losing a family member or a friend on Saturday.

There is a hole in their hearts that will never heal from their loss.

Pray that they can eventually find peace in their hearts.

The scars that they have and will carry on them from this tragedy will always be a reminder of what happened that fateful day.

What happened in Buffalo can never be changed or minimized or taken away from them for as long as they live.

By coming here today you are remembering these lives that were taken away.

You are saying that this type of hate is wrong and has no place here - not today, not tomorrow or any day in the future.

We are bound together as Union Brothers and Sisters to share one another’s burdens - to help support each other, to not turn your back on people in need.

That is why you are here to say to your children that this was important to take this time to gather and remember the victims, their families and to publicly stand together to say that what was done is wrong and the killing of innocent lives has no place here.

As Brothers and Sisters, it is so difficult to understand this type of hate.

We as Union Members eat together at the same lunch tables, earn the same wages, work side-by-side daily together, carpool together, and we are always looking out for each other’s safety on the job every day.  We share stories from our families with each other.

The unity of our Brotherhood’s is what brings us here to show that we care, that we want to make a positive impact on life.

To show our children and grandchildren that to meet on days like today is important.

To show empathy for our hurting neighbors.

There is a difference between sympathy and empathy.

Sympathy is to have feelings of pity and sorrow for someone else’s misfortune.

Empathy is the ability to try and understand and share the feelings of another person who is suffering.

Please hold these families in your prayers for as long as you can.