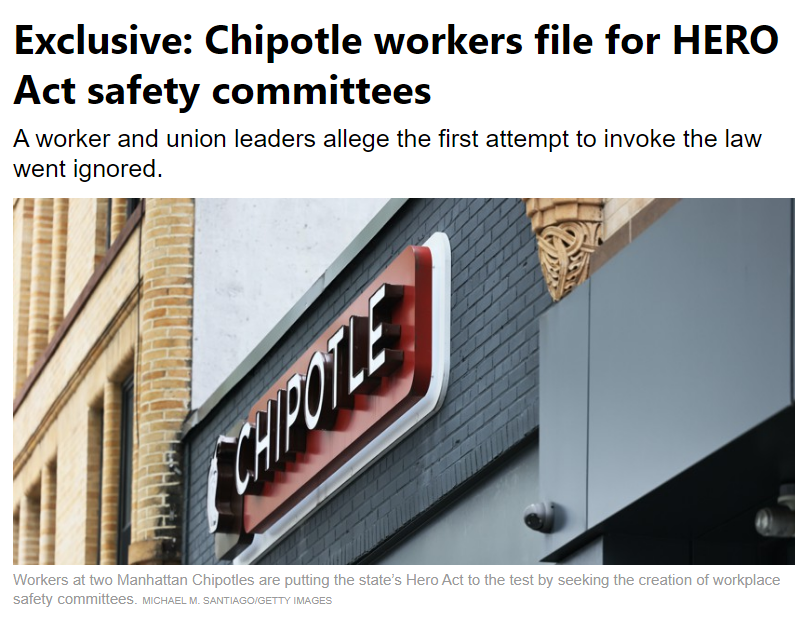 (NEW YORK CITY) - Workers from at least two different Chipotles are putting the New York HERO Act to one of its first major tests, requesting the formation of Workplace Safety Committees as the law permits - but they say they’ve faced resistance in their first attempt and are bracing for more resistance as other locations are expected to make similar requests.

Workers at 269 Amsterdam Avenue in Manhattan became the first location to attempt to form a Workplace Safety Committee back in January.

A total of 14 Workers there signed onto a petition asking for the Safety Committee, which would provide Workers with a more concrete way to address and improve unsafe working conditions.

Alyssa Roman, a 21-year old who’d been working full time while also attending school and who led the effort to gather signatures for the petition, described several unsafe working conditions that she and her Co-Workers experienced, like the lack of a security guard - despite the fact that someone had shattered the glass in the front of the store last year.

“I had to come in the next day and clean all the glass myself - no gloves, no nothing,” Roman told City & State.

She said that the sanitizer used to clean the dishes caused her to break out in hives as well, but that her manager did not permit her to use gloves to protect her skin.

In December, Roman said she tested positive for COVID-19 - the pandemic had originally been the impetus for the HERO Act, meant to offer protections for Essential Workers who could not work remotely.

She said her doctor told her to stay home for 10 days.

“And they were forcing me to come back in a matter of five days after I got the positive test - they were like: ‘Just wear two masks,’” Roman said.

The Labor Union 32BJ Service Employees International Union (SEIU), which is helping organize Unionize Chipotle Workers, informed Roman of her rights under the HERO Act, leading her to begin advocating for a Workplace Safety Committee to address concerns like hers.

On January 20th, the Workers submitted their petition and gave managers five days to respond and facilitate the committee’s creation, as is required by the law - but at the end of that period, they received no response.

Months later, and after Roman filed a Human Resources Complaint about the matter, the Amsterdam Avenue location still has no safety committee.

Roman also transferred to a different location in hopes of better conditions, but described a number of safety issues since making the move.

To Continue Reading This Labor News Report, Go To: www.cityandstateny.com/politics/2022/05/exclusive-chipotle-workers-file-hero-act-safety-committees/366988/