UFCW Local One, Which Represents Employees Who Survived The Racist Massacre At The Tops Supermarket On Buffaloâs East Side, âIs Stepping Up To Help Support Themâ 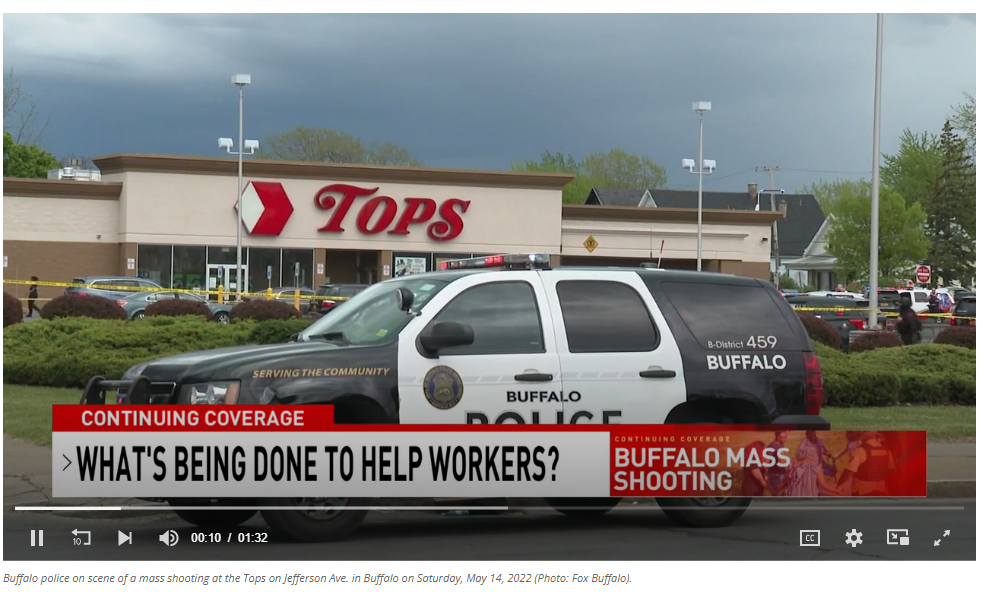 (BUFFALO, NEW YORK) – United Food & Commercial Workers (UFCW) Local One, which represents Employees who survived the racist massacre at Tops Supermarket on Buffalo’s East Side, is stepping up to help support them.

“We are deeply saddened and outraged by the ruthless killings at the Tops Store on Jefferson Avenue in Buffalo.  This senseless attack, motivated by hate, was pure evil,” said a statement released by UFCW Local One. “Our hearts go out to the innocent victims and their families.  We pray for our Members at Tops that witnessed this horrific act of terror.  Our heart-filled gratitude is expressed to the First Responders and to every single neighbor of the store that was impacted by this unimaginable tragedy.”

Payton Gendron, 18, reportedly drove several hours from his Binghamton area home to the Jefferson Avenue Tops Supermarket and - dressed in military garb with bullet-proof armor, proceeded to carry out a murder spree on Saturday (May 14th), killing 10 people and injuring three others before he was talked into surrendering by Buffalo Police.

Since the shooting occurred, UFCW Local One has been on the ground in Buffalo providing support for their Members who work inside the store.

Tops Workers have been meeting inside a local library, surrounded by each other and provided with Grief Counselors should they want to talk with one.

In an interview with CNYCentral, UFCW Local One President Frank DeRiso said: “You hear some of the stories of what these people witnessed and what they had to view on their way out of the store, it’s just horrific.  I don’t know how any of them, seeing what they had to see, it’s going to take a long time for them to heal.  Which is why we have the counselors there twenty-four hours (around-the-clock) if need be.”

Together, Tops’ management and the UFCW have been working to assist those who witnessed the horrific act of hate so that they may begin to heal.

The Union has their own service that can provide over the phone counseling to Members.

"We have trained Military People who are warriors that come back with PTSD, can you imagine a normal Cashier, Produce Clerk, Meat Cutter?  They didn’t sign up to be in a war zone and that’s where they were (on that Saturday),” DeRiso said. “The horror our Members experienced from a racially charged terrorist is unthinkable.  This will be a long road to recovery for the victims of this tragedy and this is just one-way UFCW Local One is helping our Members that were targeted by hate,”

Meanwhile, UFCW Local One has established a special fund for its Members who are employed at the Jefferson Avenue Tops Store.

Funds will be collected by the Local One Relief Fund, a New York Corporation and 501 (3)c non-profit, that was established to help Members recover from disasters.

One-hundred-percent of the funds collected will be given to the Members of the store and a donation will also be given to Aaron Salter’s Family, the UFCW said.

Salter, a retired Buffalo Police Officer and Tops Security Officer, encountered the shooter and exchanged fire with him, but did not survive.

Salter paid the ultimate price with his life and saved countless lives with his heroic actions, UFCW Officials said.

For More On This Labor News Story, Go To: https://cnycentral.com/news/local/tops-workers-union-providing-counseling-to-employees-that-witnessed-buffalo-mass-shooting

And, Read The Buffalo News’ Interview With Tops Worker Jerome Bridges, Who Tells The Buffalo Newspaper Of His Hiding In Barricaded Room From Gunman During Mass Shooting: https://buffalonews.com/news/local/tops-worker-tells-of-hiding-in-barricaded-room-from-gunman-during-mass-shooting/article_2137a044-d793-11ec-acd3-976e6bbd2783.html?utm_medium=social&utm_source=facebook&utm_campaign=user-share&fbclid=IwAR3DtiecbvXZka3w4jw22NzTdgXXnPko958XG3b1ayijfJXdvgtDJ5AJ74c