Published Thursday, May 19, 2022
by Josh Eidelson/Bloomberg 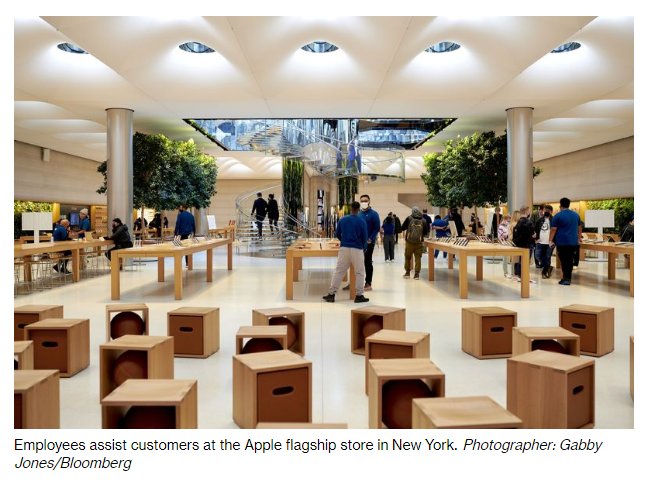 Asked about the filing, an Apple spokesperson reiterated a previous comment saying the company deeply values the contributions of its Retail Employees.

Apple Staff in Atlanta are slated to vote on June 2nd on joining the CWA.

Employees in Maryland have petitioned for a vote to be represented by the International Association of Machinists (IAM), while employees at New York City’s Grand Central Station have been working with the Service Employees International Union (SEIU), according to their campaign website.

CWA’s Deputy Organizing Director Tim Dubnau declined to say whether the Union is seeking to represent Workers at Apple’s World Trade Center Store, but said they are among many who have recently contacted the Labor Organization.

“When we learn about Apple violating the law, we try our best to defend Workers’ Rights,” he said. “It’s time for them to just back off and allow Workers to choose for themselves whether or not they want a Union.”

While the NLRB has previously held companies can require Employees to attend Anti-Union meetings, the Agency’s current General Counsel Jennifer Abruzzo views such “captive audience” sessions as inherently coercive and illegal, and her office is pursuing cases that could change that precedent.

“I understand that the argument is that, ‘We’ve been doing this for a long time,’” Abruzzo, appointed by President Joe Biden, said in a recent interview. “But that doesn’t mean it is right.  It doesn’t mean it’s lawful.”

To Directly Access This Labor News Story, Go To: www.bloomberg.com/news/articles/2022-05-18/apple-accused-by-union-of-illegal-tactics-at-new-york-city-store