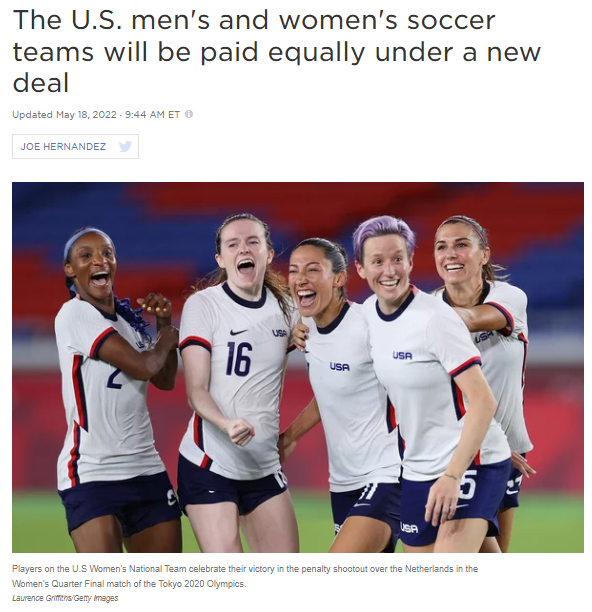 The U.S. Soccer Federation announced Wednesday (May 18th) that it has reached a deal to pay the U.S. Men's National Team and the U.S. Women's National Team equally, eliminating a contentious pay gap that saw Female Players earning less.

The new Collective Bargaining Agreements (CBAs) will run through 2028 and include the "equalization" of World Cup prize money, the organization announced.

In February, the Governing Body and the Women's Team announced a settlement to resolve the long-standing pay dispute, with the Federation agreeing to pay the two teams equally in the next Union Contract and give the Women's Team $22 million in back pay.

Becky Sauerbrunn, a Player on the Women's Team and President of the United States Women's National Team Players Association, said achieving equal pay was the result of gains players had made both on and off the field: "We hope that this Agreement and its historic achievements in not only providing for equal pay, but also in improving the training and playing environment for National Team Players will similarly serve as the foundation for continued growth of Women's Soccer -both in the United States and abroad."

The Federation said the two CBAs - one for each team - have "identical economic terms" that include equal pay for all competitions, including the FIFA World Cup.

The appearance fee for a friendly game and the bonus based on the team's performance and their opponent's rank will be the same for both squads.

Additionally, the teams will pool prize money from their respective World Cup appearances and split the total among the two teams and the Federation.

It is the first Federation in the world to equalize World Cup prize money, the organization said.

Both teams will also have the same framework for sharing in commercial and ticket revenue.

"This is a truly historic moment," U.S. Soccer President Cindy Parlow Cone said in a statement. "These agreements have changed the game forever here in the United States and have the potential to change the game around the world."

Tim Ream, a Defender on the U.S. Men's National Team, said in a tweet that it had "been a long process for all sides but proud of everyone involved for reaching and achieving this.  It now truly is One Nation, One Team."