Published Thursday, May 19, 2022
by Industriall-Union.org 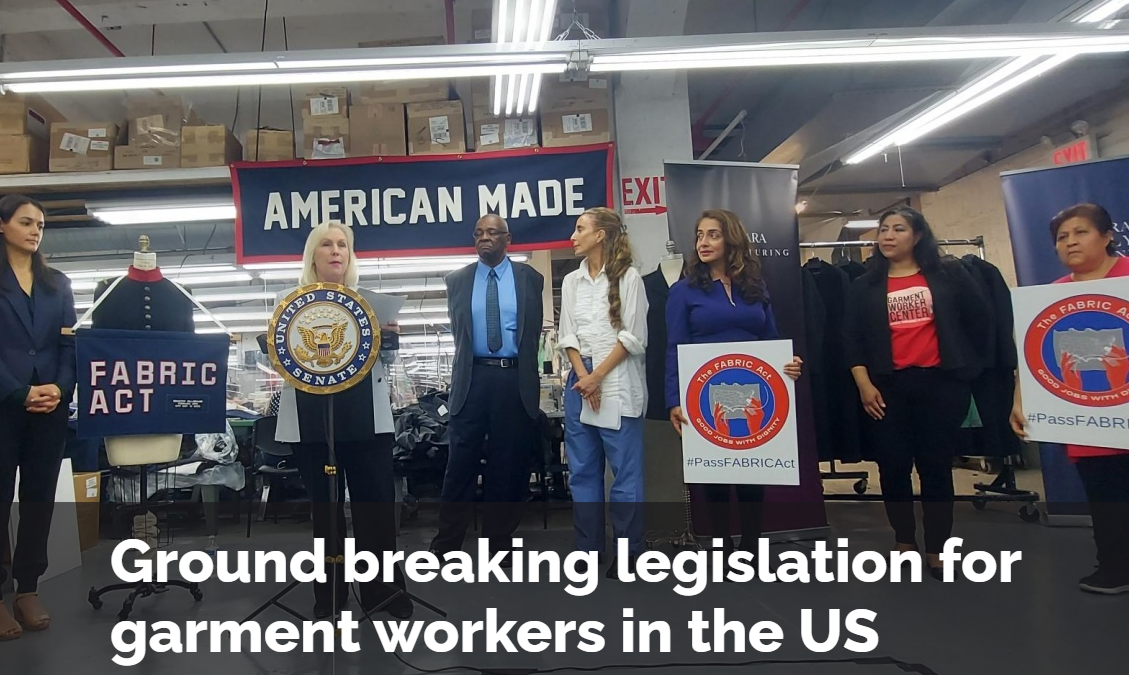 Once in place, the legislation will improve working conditions and reform the piece-rate pay scale for the country’s nearly 100,000 Garment Workers.

The FABRIC Act, introduced by U.S. Senator Kristen Gillibrand (Democrat-New York), will reinforce protection for Workers in the Garment Industry.

The Bill establishes joint and several liability requirements through which Workers can hold Fashion Brands and Retailers responsible for the Labor Practices of their U.S. Contractors, bringing a level of legal accountability that has previously been lacking.

This provision will allow Workers to pursue legal remedy from the same Brands and Retailers whose business practices lead to Labor abuses and who have managed to evade responsibility for decades.

As a group, Garment Workers suffer the second-highest rate of wage theft of all U.S. Workers.

Using payment-by-piece-rate compensation schemes as base pay will be prohibited, while the Bill aims to ensure manufacturers provide Minimum Wage as a pay floor, with the option to pay piece-rate above and beyond initial wages.

"Workers United is proud to endorse the FABRIC Act, which establishes important liability requirements to hold Fashion Brands and retailers accountable for the Labor Practices of their U.S. Contractors.  This provision, and the establishment of a Minimum Wage floor, will help ensure jobs in the U.S. Garment Industry are good jobs with dignity and respect," Edgar Romney, Secretary-Treasurer at IndustriALL-affiliate Workers United-SEIU, said.

In a statement, Senator Gillibrand said: “Supply chain disruptions caused by the pandemic have only exacerbated these ongoing issues, which are disproportionately shouldered by Women, People of Color and Immigrant Workers.  The FABRIC Act would protect nearly 100,000 American Garment Workers and help revitalize the Garment Industry in the United States by improving working conditions and reforming the Piece-Rate Pay Scale.  Women are leaders in the Cut-and-Sew Apparel Manufacturing Industry, making up 61% of Workers, and following heavy job losses for Women during the pandemic, we need to invest in them and this crucial industry.”

To Directly Access This Labor News Story, Go To: www.industriall-union.org/ground-breaking-legislation-for-garment-workers-in-the-us