The Brotherhood Of Locomotive Engineers And Trainmen âConduct The Pushâ For Passage Of A Statewide Two-Person Crew Bill, âPoint To Disasters That Could Have Been Stopped If An Adequate Number Of Conductors Were On Dutyâ 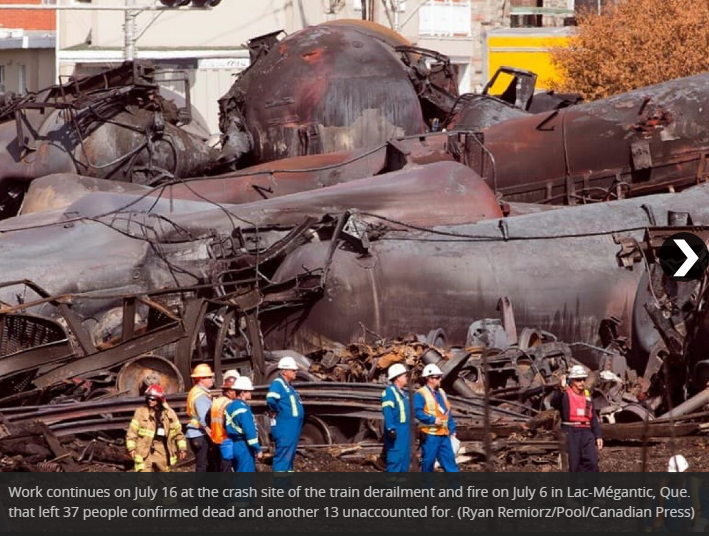 WNYLaborToday.com Editor’s Note: Pictured above, file photo of the July 2013 trail derailment in the Quebec, Canada Town of Lac-Mégantic - where at 1:15 a.m., an unattended 73-car Montreal, Maine and Atlantic Railway (MMA) Freight Train carrying crude oil rolled into its downtown area and derailed - which resulted in a fire and explosion of multiple cars that caused a major blast and fire, killing 47 people and destroying more than 30 buildings.  News reports described it as a more than half-mile blast radius.  (Canadian Press File Photo)

(ACROSS NEW YORK STATE) - Brotherhood of Locomotive Engineers and Trainmen (BLET) National Vice President Jim Louis never wants what occurred in the Quebec, Canada Town of Lac-Mégantic back in July 2013 to ever happen in any Town across New York State - and that’s why he and his Union, among other Labor Organizations, are mobilizing support for passage of a Statewide Two-Person Crew Bill on New York’s Freight Railroads.

The Bill, introduced by State Senate Timothy Kennedy of Buffalo (S3953B) and Assemblyman Bill Magnarelli of Syracuse (A1287B), would mandate all Freight Trains have at least two persons on the train - a certified Locomotive Engineer and a certified Conductor.

BLET, as well as SMART (the Sheet Metal, Air, Rail and Transportation Workers Union), supports the legislation, which is intended to protect the safety of the general public and Railroad Workers, according to the BLET.

Right now, the Bill, in both the State Assembly and Senate, is moving forward - albeit slowly.

In the Senate, the Bill is currently in Committee, while in the Assembly - where it passed out of Codes last week, has now moved onto Rules, BLET Representatives have updated WNYLaborToday.com.

“They ‘want to get rid of our Conductors, even though these trains haul the most dangerous stuff.’  We’ve been working on this for three years ‘and we’re close to getting it done,’” Justin Stutz, who serves as Vice Chairman of the New York State Legislative Board for the BLET, told WNYLaborToday.com of the fight against rail carrier lobbyists.

As such, the BLET is now calling on its Membership in New York (The Union represents 1,317 Members across the State) to immediately contact their State Assembly Representatives and State Senators in order to secure their individual support for the legislation, so that it eventually may receive a positive vote on the State Assembly and Senate Floors before moving on to Governor Kathy Hochul’s desk to be signed into law.

Speaking with WNYLaborToday.com, BLET National Vice President Louis said rail carrier lobbyists are currently working in fierce opposition to what his Union describes as necessary safety requirements, even though the specter of potential and future train derailments - or worse, could loom in the future if nothing is done.

Case in point, the horrific July 2013 train derailment in Lac-Mégantic, Quebec, Canada, where at 1:15 a.m., an unattended 73-car Montreal, Maine and Atlantic Railway (MMA) Freight Train carrying crude oil rolled down into it downtown area and derailed - causing in a fire and explosion of multiple cars, which resulted in a major blast and fire that killed 47 people and destroyed more than 30 buildings.  News reports described a more than half-mile blast radius.

A Safety Board later identified multiple causes for the accident, including leaving a train unattended on a main line.

And there was a major trail derailment in Rome, New York several years ago that also serves as a sober reminder that there is a need “for several sets of eyes,” Louis says:

“Everything’s ‘fine until (an accident) happens.’  Like we say, ‘If its rail, it’s on CNN.’  These cars ‘carry all kinds of hazardous materials’ (across New York State),” Louis said.  “Ethanol, a lot of propane, ‘that’s why you have to keep an eye out for them.’  We ‘need to keep our communities safe.’  These trains ‘have been increased (in length to) three miles long and Engineers ‘need three sets’ of locomotives - in the lead, the middle and at the rear (to control them).  ‘This calls for several sets of eyes.’  Conductors ‘are the First’ Responders.  ‘They take care of big or small’ issues.  ‘There used to be (a crew of) five, but technology has whittled that back’ - ‘but we still have to be concerned about (protecting) the public.’  Similar legislation has been passed in several other States, including California, Washington State, Nevada and Illinois.  ‘There’s been a lot of push back’ (from rail carrier lobbyists), but (our Elected Officials) ‘are finally getting it and they are doing a great job’ (moving it forward).”

As BLET Officials have said, Rail Carrier Lobbyists are working in fierce opposition to these necessary safety requirements.

But last year, the Federal Railroad Administration dropped a proposed rule that would have required two-person crews on freight trains.

In response, Democratic Lawmakers in the U.S. House and Senate introduced legislation that calls for a minimum of Two-Person Crews on freight trains.

BLET and other Rail Labor Unions support that Federal Legislation.

“Our Membership ‘does the job and keeps our communities safe,’” Louis reminded.