Published Tuesday, May 17, 2022
by Steve Wishnia/LaborPress 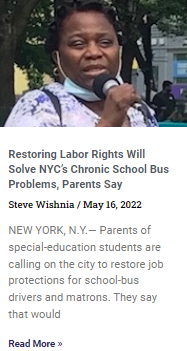 (NEW YORK CITY) - Parents of special education students are calling on New York City to restore job protections for School Bus Drivers and Matrons - they say that would help solve chronic problems with lateness and unreliability in the system that transports more than 150,000 children, primarily those in special education, to school and back.

The problems, such as buses taking two hours or more to get kids to school, stem largely from private bus companies paying so little they can’t retain Staff, Shamel Lawrence, Parent Representative and Co-President of the District 75 Council - the city-wide Special Education District - told LaborPress before a small rally by parents in Union Square over the weekend.

That, he said, is the result of the Bloomberg Administration’s 2013 elimination of “Employee Protection Provisions.”

Those required the private bus companies receiving new contracts for routes from the City Office of Pupil Transportation to hire the previous contractor’s Workers at the same pay, benefits, seniority and scheduling.

Then-Mayor Michael Bloomberg argued the provisions made it difficult to cut costs and claimed a court had ruled they interfered with competition.

A month-long strike by Amalgamated Transit Union (ATU) Local 1181 failed to stop him.

Restoring those protections, Lawrence says, is necessary because “it will help them provide better services to our kids.”

His eight-year-old son relies on the private bus system to get from Manhattan to his school in Queens, which has an “inclusion” program where Special Ed kids can take regular classes.

Late last week, Lawrence said, both the Driver and the Matron on the route were out sick and the bus company failed to notify either the school or the parents.

“These are issues our parents face with these busing companies,” he added.

Brooklyn Mother Beth Eisgrau-Heller told the rally that her 11-year-old son goes to a school in Hillside, Queens because it was the only suitable one her family could afford.

He is “thriving” in its small classes after being “overloaded” in regular-size classes, she said, but it takes a long time to get there, as routes are often doubled up because there are not enough Drivers.

“My son should not be on a bus for two hours or more,” she said.

Last Fall, the City began using its LimoSys Program - in which it hires livery, Uber or Lyft taxis to bring Medicaid patients to doctors’ appointments, to transport pupils who’d normally be bused.

“Some of our kids cannot make it in,” says United Federation of Teachers (UFT) Executive Board Member Joanna Brown. “If they do come in, it’s two hours late.  It’s a mess.”

She’s an eighth-grade English Language Arts Teacher at P94, a District 75 School on the Lower East Side that has inclusion classes with the elementary and middle school it shares the building with.

Some of her students have to get up at 6 a.m. because they’re coming from Upper Manhattan and the Bronx.

“We really need everybody to come together and help us,” she says.

To Continue Reading This Labor News Report, Go To: www.laborpress.org/restoring-labor-rights-will-solve-nycs-chronic-school-bus-problems-parents-say/