The Year Workers Said 'No:â A âRecord-Breaking Number Of Workers Have Quit Their Jobsâ - âItâs A Trend That Hasn't Let Up & At The Same Time, An Organizing Wave Has Spread Across A Host Of Retailers,â Such As Starbucks & Amazon 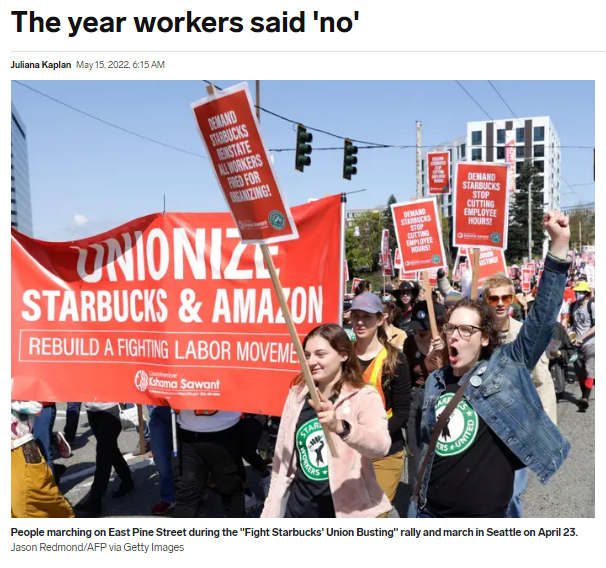 A year ago, if you'd asked Hope Liepe if she'd be working at a Unionized Starbucks, she "would've probably said that was, like, insane and would never happen - especially at Starbucks."  But last month, the store in Ithaca, New York, where the 18-year-old works as a Barista joined a wave of Starbucks stores officially voting to Unionize.

"I remember that day.  We all came together in this big watch party," Liepe said. "Just the excitement and just the joy that you could feel from all of us of having completed something together and being able to move together to form a better workplace for all of us."

Since then, all three locations in Ithaca have voted to Unionize, along with more than 50 Starbucks stores nationwide.

Apple Workers in Atlanta and New York are looking to follow their lead.

"We are listening and learning from the partners in these stores as we always do across the country," Starbucks said in a comment to Insider. "From the beginning, we've been clear in our belief that we are better together as partners, without a Union between us, and that conviction has not changed."

Liz Shuler, the President of the National AFL-CIO - the country's largest Labor Federation, said the past year has shown "Workers in motion."

"Coming out of the pandemic, Working People have not only shown their resilience, but they've shown that they are ready to draw a line and demand more," she said.

It's hard to say Unionization is at a tipping point.

While Gallup found 68% of Americans approve of Unions, a high unseen since 1965, actual Membership fell yet again in 2021.

But one thing is clear: The culture of work in America changed drastically in the past year.

Demand for higher wages, a rise in so-called anti-work attitudes, "slowing up," and a thirst for organizing are just some of the tools Workers wielded with mighty force.

It has been the year that Workers said "no" to what they viewed as low wages and poor conditions that began last April when Americans walked off the job in an unorganized fashion to the tune of a record four million resignations - and it hasn't let up since.

"I think the pace of the change has surprised me," National AFL-CIO President Shuler said. "We always knew the potential was there.  It's a time where people are finding their voice and ready to stand up and say, 'We are not gonna take it anymore.  So whether you're in a Union or not, I think Workers have been pretty dissatisfied with their jobs - and they're taking action."

April 2021 kick-started a wave of quitting felt around the country.

To Continue Reading This Labor News Story, Go To: www.businessinsider.com/year-workers-said-no-labor-shortages-unions-great-resignation-quits-2022-5