Published Tuesday, May 17, 2022
by Wade Rathke Via Peopleâs World 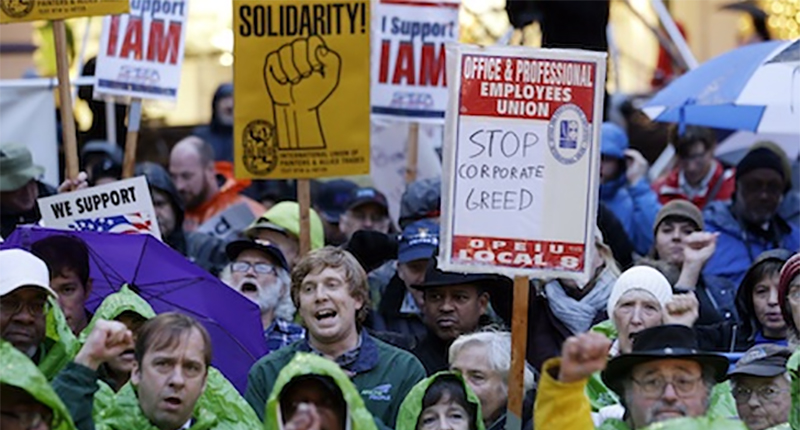 Finally, it’s a new morning for Workers in America.

For at least a brief time, while the Biden Administration is alive, even if unwell, and the Supreme Court has not yet brought the darkness and ended our parade, opportunity is bursting out in the most surprising places.

We have a “movement moment” for Workers seeking their rights on the job and demanding a Union.

Amazingly, we also have a National Labor Relations Board (NLRB) that has reinvigorated itself with a stiff backbone and finally accepted its mission as protecting Workers and their rights to organize.

We all are familiar with the perfect storm that has put the wind to Workers’ backs now and is providing leverage to couple with opportunity.

The pandemic unveiled Workers’ reality and reaffirmed their centrality in all phases of the economy.

Inflation and shortages have forced wages upward and emboldened Workers to take action for more.

The evidence of this movement moment seems everywhere now.

Amazon Workers have not only organized in Alabama and New York.

Groups like Amazonians United have agitated in another dozen locations on issues inside warehouses, distribution and delivery centers.

Starbucks workers have filed for election in hundreds of stores and are winning most of the elections held to date.

Google Workers have kicked up their heels.

It’s not just the young, the digital, the hip, and the techies.

It’s also Workers at Dollar General, the ubiquitous store in lower income, minority and rural communities across the country.

Mary Gundel, a Dollar General Worker, posted a TikTok voicing her issues with the company.

She recently told me that she’s surprised to find herself leading a “movement” of DG Workers, though she felt clueless about how to mobilize the “concerted activity” necessary for Union Organizing, but she also made clear that her emerging understanding and leadership come in part from the “new” NLRB.

For once, the NLRB is actually protecting Workers’ Rights instead of cowering before the endless manipulations of management.

Part of the credit goes to the new General Counsel, Jennifer Abruzzo, who recognizes the NLRB should ride this new wave of Worker Activism, not serve as the dam holding it back.

To Continue Reading This Labor Perspective, Go To: www.peoplesworld.org/article/a-movement-moment-plus-a-reinvigorated-nlrb-means-opportunity-for-workers/