Published Tuesday, May 17, 2022
by WNYLaborToday.com Staff 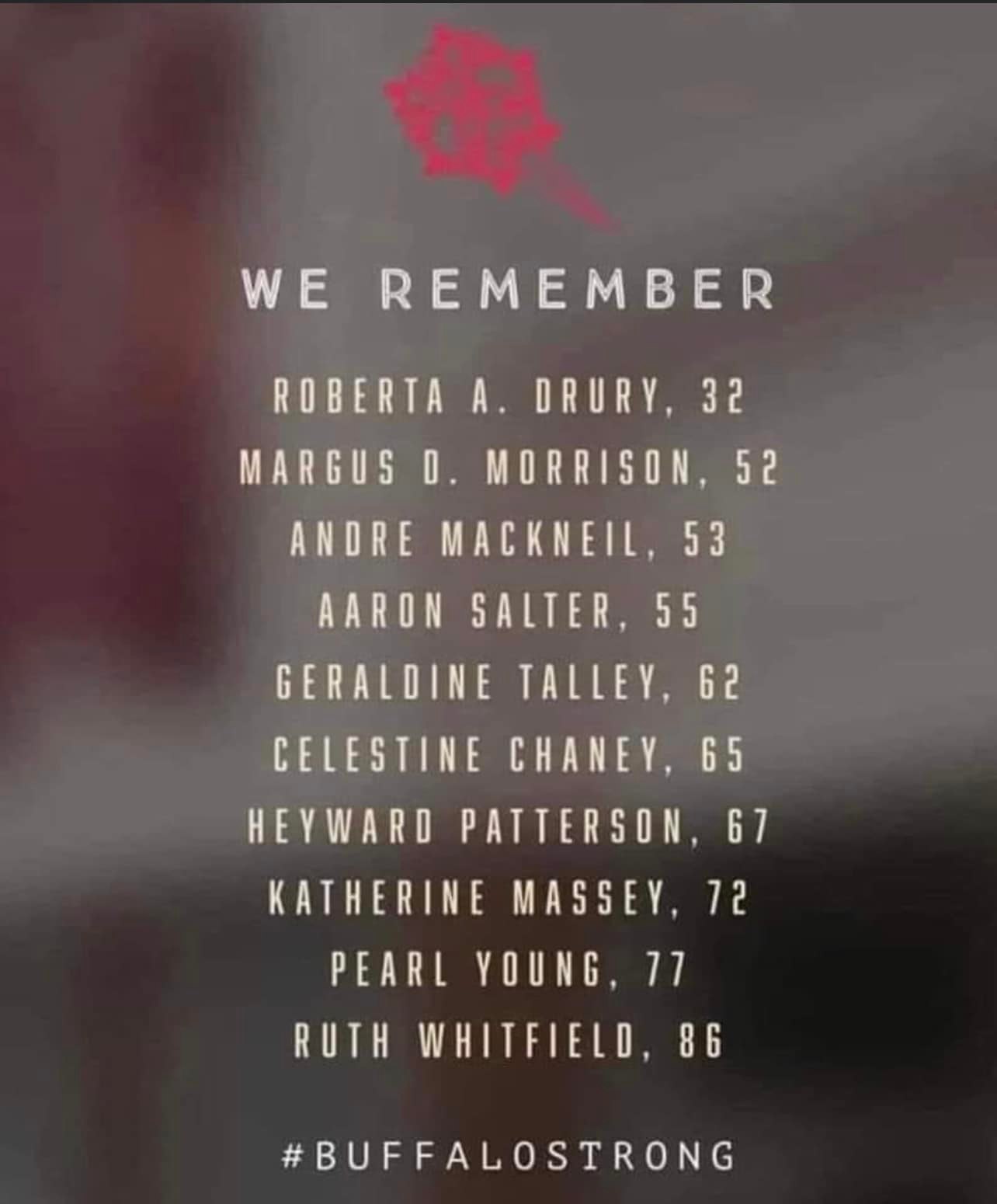 (BUFFALO, NEW YORK) – More and more Unions are speaking out against the racist grocery store shooting spree in Buffalo over the weekend that left 10 dead and three injured in a predominately-Black neighborhood, as President Joe Biden travels to Buffalo today (Tuesday, May 17th) to offer his sympathies to the grieving families and pledge to “do everything in our power to end hate-fueled domestic terrorism.”

An 18-year-old gunman reportedly drove several hours from the Binghamton area to the Jefferson Avenue Tops Supermarket and - dressed in military garb with bullet-proof armor, proceeded to carry out a murder spree on Saturday (May 14th), killing 10 people and injuring three others before he was talked into surrendering by Buffalo Police.  Reports said the young man live-streamed the slaughter on the Internet and left behind a 180-page manifesto that spewed hatred for Jewish and Black people.

President Biden and First Lady Jill Biden were arrive in Buffalo to offer their sympathies to the grieving families.  The President was also expected to pledge to “do everything in our power to end hate-fueled domestic terrorism.”

The President released the following statement: We grieve for the families of ten people whose lives were senselessly taken and everyone who is suffering the physical and emotional wounds of this horrific shooting.  We are grateful for the bravery of Members of Law Enforcement and other First Responders who took immediate action to try to protect and save lives.  The First Lady and I are praying for the victims and their families, and hearts all across this country are with the people of Buffalo.  We still need to learn more about the motivation for (the) shooting as Law Enforcement does its work, but we don’t need anything else to state a clear moral truth: A racially-motivated hate crime is abhorrent to the very fabric of this Nation.  Any act of Domestic Terrorism, including an act perpetrated in the name of a repugnant white nationalist ideology, is antithetical to everything we stand for in America.  Hate must have no safe harbor. We must do everything in our power to end hate-fueled domestic terrorism.

Meanwhile, a number of Unions are releasing statements on the shooting, which was carried out at a Union-represented supermarket (Workers at Tops Supermarket in Buffalo area represented by United Food & Commercial Workers Local One):

Communications Workers of America (CWA) District One: “The Members of the Communications Workers of America are devastated by the news of the racist massacre that took place at the Tops grocery store on Jefferson Avenue in Buffalo.  Our prayers and our condolences go out to the families of the victims and to the entire Black Community of Buffalo. We know these events come as especially devastating news for our own Black Members.  There are no words to express our rage, our sorrow, our grief.  Our Union was founded on the bedrock principle of solidarity - the idea that every Working Person, regardless of race, creed, gender or ethnic heritage, shares common interests and a common aspiration for a just and humane life.  Saturday’s shootings tear apart the very idea of solidarity.  We are stunned by the Tops massacre, but we are not surprised.  Tragically, Buffalo has now joined the long list of American cities and towns that form a map of the mass murder of Black people dating back hundreds of years: Colfax, LA, Wilmington, NC, East St. Louis, MO, Chicago, Rosewood, FL, Detroit, Tulsa, OK, Charleston, SC, and many more too numerous to mention.  We must address the reality that in this country, the most basic activities of life - going for a jog, going shopping, driving a car - too often put the lives of Black People at risk.  The Buffalo shooting should also not surprise us because the shooter was clearly motivated by white supremacist theories and propaganda that have entered the mainstream of American political discourse.  When the most popular cable television program in the country spews out incessant attacks on Immigrants and repugnant theories like ‘the Great Replacement,’ are we surprised that some demented young person decides it is his responsibility to take matters into his own hands? We can no longer ignore this dangerous propaganda.  We call on advertisers to withdraw their support from racist programming which leads directly to the kinds of events we saw Saturday in Buffalo - and in recent years in Charleston, El Paso, and Pittsburgh.  This is a time for grieving, but it is also a time for anger, and for a steadfast commitment to dismantling the racism that has divided our country for centuries, and continues to divide us today.  CWA stands ready to join that struggle.”

UUP President Frederick E. Kowal: “The entire United University Professions Family mourns the senseless loss of life on Saturday in Buffalo.  We join our colleagues, their families, members of the Buffalo Community and the families of the victims in solidarity and sorrow.  The events of this past weekend call on all of us to consider the nature of our society, where mass murder is committed with such regularity and disdain for human life - and in this case, with deep-seated hatred for African Americans.  As Educators and Healers, we are called upon to sustain life and to support the growth of every individual in our society.  Actions like those of this past Saturday are a direct assault on that work, as well as an assault on the values of equality and justice that we hold dear.  As we have throughout our nearly 50-year history, we will bear witness and stand with the victims of injustice and against the violence that is racism.  We will call out those who perpetrate the crimes of violence against our fellow human beings, but we will also call out those who inspire them: the purveyors of racist doctrines in the media and those who seek, hold or have held public office and promote racist doctrines - and gain political power through such actions.  Everyone deserves to be safe from the terror of gun violence.  We call, once again, for the leaders of our State and Nation, to summon the political will to bring an end to unwarranted and unrestricted access to battlefield weapons.  The time is long past for such action, as casualties continue to increase in number and violence is amplified.  No society that claims to be civilized can tolerate any longer the scourge of violence that rages across our land.  We extend our sympathies to those who have lost loved ones.  You and those you hold dear are in our thoughts and prayers during this painful time.  We also extend the promise that UUP will stand with you in your demand for justice and a long-overdue healing of our society from the pathological racism that infects all aspects and institutions of American life.”

New York State United Teachers (NYSUT) President Andy Pallotta, Buffalo Teachers Federation (BTF) President Phil Rumore and Buffalo Educational Support Team (BEST) President Jo Ann Sweat issued the following joint statement: “Like everyone in New York, we are shocked and horrified by this senseless, repugnant act of violence against one of our communities.  This brutal act and the racial hatred that motivated it are incomprehensible, yet all too familiar in our society.  Our communities must have the resources and support needed to ensure those who might commit acts of violence are identified and intervention takes place before tragedy occurs.  That must happen immediately - not tomorrow, not next week, but today.  Educators across Western New York and the state stand in support of our children, our colleagues and our families impacted by this tragedy.  We mourn those we’ve lost to this vicious and hateful act.  Let us come together to remember their lives and pray for their families.”

BTF President Phil Rumore also issued this additional statement: “We must all try to truly feel and remember the pain and heartache felt by the families, loved ones and friends of those whose lives were hatefully and viciously taken.  Our schools and communities must immediately have the support and resources to ensure that those who might commit acts of violence and hatred are identified and the violent actions are prevented and that those that commit these acts are punished to the full extent of the law… not tomorrow, not next week, today.  Let us come together to ensure that all those whose lives were viciously and hatefully taken are given meaning.  The flag at BTF Headquarters will be lowered to half-staff in memory of all those lives that have been taken as a result of hatred and violence.”

Rochester and Genesee Valley AFL-CIO Area Labor Federation Dan Maloney: This weekend a young man from Upstate New York drove to Buffalo guided by an ideology of hatred and violence.  A self-described fascist and white supremacist, he chose his target based on the high density of Black People living in the area.  He went to a Tops Supermarket and killed 10 people and injured more.  His intentions were clear: to kill Black People on the basis of their race.  The Rochester & Genesee Valley Area Labor Federation strongly denounces the racist and hateful ideologies that led to the massacre on Saturday.  We will continue to educate and organize Workers in the fight for social and economic justice, as we build a world free of discrimination, hate and bias.  We will continue to build a more perfect union for all.  The Labor Movement is built on a rejection of division and hate along lines of race.  Fascist and white supremacist ideas are antithetical to the goals of our movement and will have no home in the Labor Movement.  In the coming days, we will share opportunities to concretely offer support to our neighbors that suffered this tremendous tragedy and we know that our members stand ready to help.

Service Employees International Union (SEIU) International President Mary Kay Henry via Facebook: I'm absolutely heartbroken by this horrific attack on Black People - including the Workers at a supermarket in Buffalo.  It's another grim reminder that we cannot allow hate & white supremacy to spread unchecked in our communities. 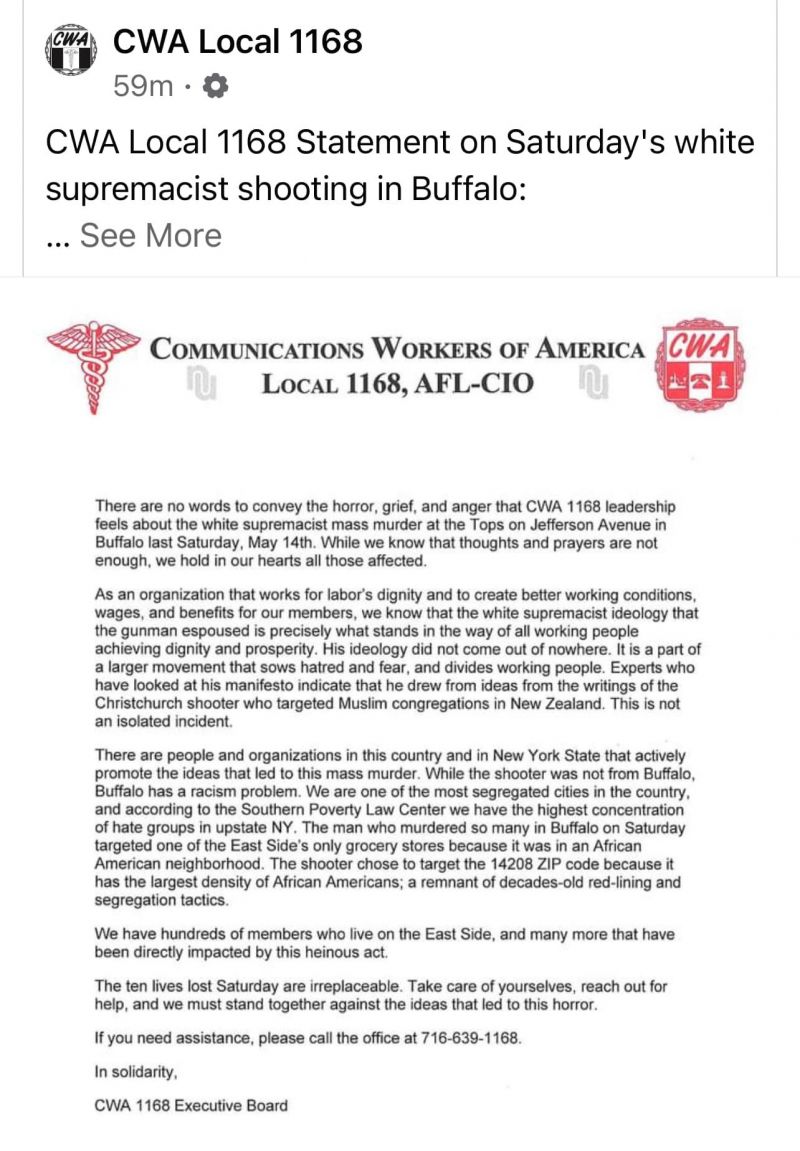 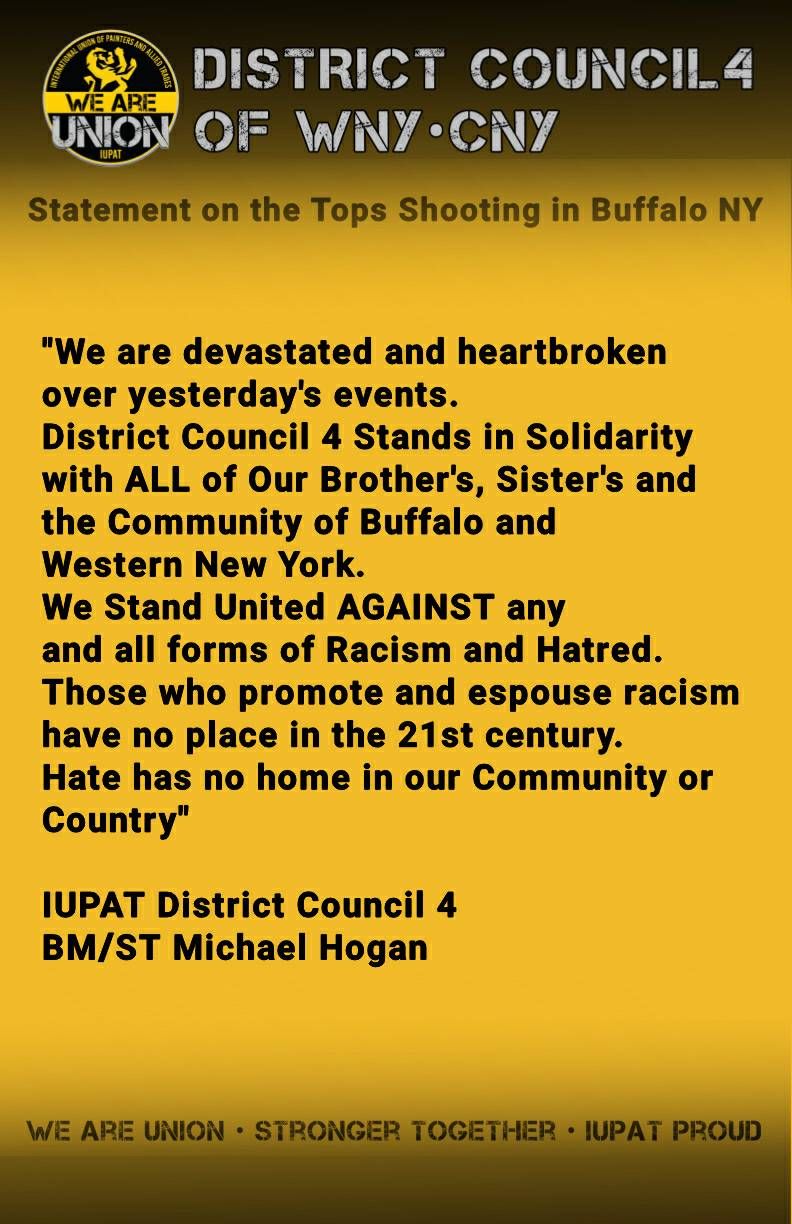