Published Tuesday, May 17, 2022
by Brown University 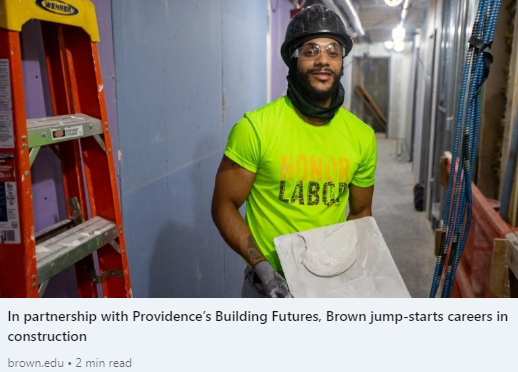 (PROVIDENCE, RHODE ISLAND) - Not long ago, Christian Domenech had a job, but he didn’t have a career: “I was a Non-Union Carpenter working for a privately-owned business,” the Providence resident said. “But what I really wanted was to join a Union.”

Domenech was one of the 87% of American Construction Workers who didn’t belong to a Union, according to Federal data.

Like many Non-Union Workers, he didn’t have a steady stream of guaranteed work, nor did he have comprehensive benefits.

In 2020, when the COVID-19 Pandemic halted construction projects across Rhode Island, some permanently, Domenech decided to make a change.

He joined the Construction Pre-Apprenticeship Program at Building Futures, a Providence non-profit that allows Rhode Islanders from all backgrounds to learn the fundamentals of a wide variety of Construction Trades without paying tuition or incurring debt.

After five weeks of classroom and hands-on instruction, Domenech went to work as an Apprentice Carpenter for Sweeney Drywall.

A year later, he completed his Apprenticeship, joined the local Carpenters’ Union and began to enjoy competitive pay and benefits.

While it’s no secret that new construction at Brown produces state-of-the-art facilities for students, Faculty, Staff and visitors, it also plays a role in jump-starting construction careers for Rhode Islanders.

Over the last 15 years, more than 320 Apprentices hired by Building Futures have logged upwards of 175,000 hours on dozens of projects at Brown - and 108 of them have completed their Apprenticeship Programs and progressed into well-paying construction careers.

Some have even continued to work on campus after mastering their respective Trades.

Building Futures President and Executive Director Andrew Cortés explained that Registered Apprenticeship Programs are a powerful engine of economic mobility because they allow people to learn and earn at the same time.

Most educational programs require students to pay tuition, and many are tough to juggle alongside a full-time job - thus making them inaccessible to those with low incomes.

But at Building Futures, Apprentices make a living wage from the moment they begin their education, including the weeks they spend in classrooms and other training facilities.

Then, after a year or more of hands-on training, Apprentices become full-time Workers and Union Members, enjoying competitive pay and benefits.

Cortés said the organization, founded in 2007, attributes much of its success to Brown.

Its partnership with the University began in the height of the Great Recession, when most capital improvement projects in Rhode Island ground to a halt.

Brown was one of the only entities in the state whose projects carried on, Cortés said.

“We started this with Brown,” Cortés said. “They didn’t just invest in this Apprentice Utilization Program for their own purposes - they gave back to the community.  That’s why this partnership is so near and dear to our hearts.”

To Continue Reading This Apprenticeship And Training Labor News Story, Go To: www.brown.edu/news/2022-05-06/buildingfutures