âStarbucks Is Playing With Fireâ - Its âUnion-Busting Tactics Have Been As Aggressive As Amazonâs, But They Might End Up Scaldingâ The Coffee Giant

Published Sunday, May 15, 2022
by Steven Greenhouse/Slate 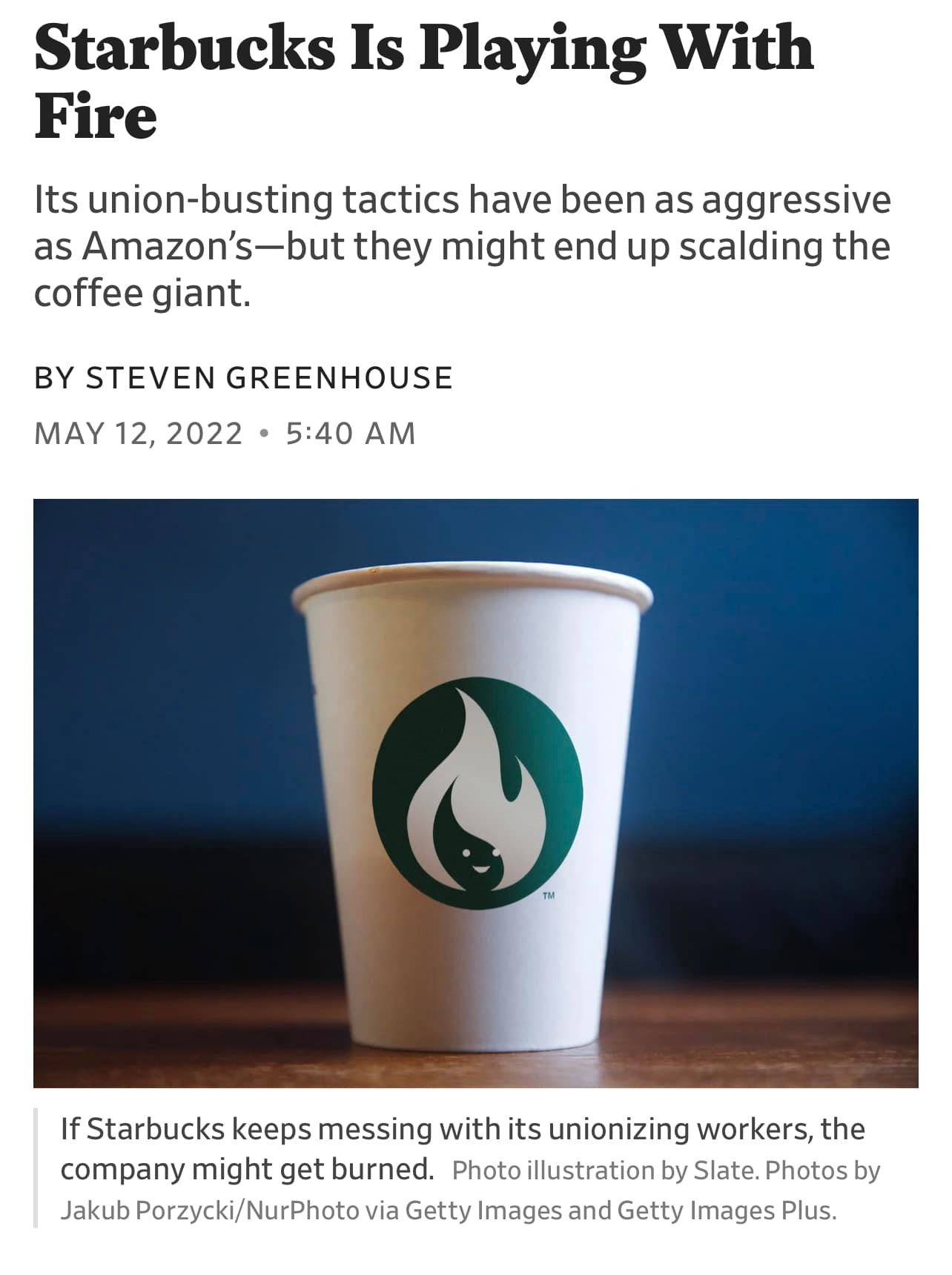 Ever since a few dozen Baristas began an organizing drive in Buffalo, New York last year, Starbucks has been engaged in a crude Union-Busting Campaign that has made a mockery of the image it has sought to portray to its customers and workforce.

Pointing to the health benefits, 401(k) match, and college tuition benefits it offers, the company has long boasted that it’s a progressive, Worker-friendly employer.

But that claim now rings hollow thanks to the aggressive way it has sought to crush its Employees’ efforts to win more of a voice at their workplace, with Starbucks using tactic after nasty tactic from the classic Union Busters’ Playbook.

Making things worse, Starbucks has insulted its Workers’ and customers’ intelligence by pretending to do no such thing.

Executives maintain they are “not Anti-Union,” but rather just “pro-partner” - the term the company often uses for Employees, while pursuing Union-Busting Strategies as aggressive as anything Amazon has cooked up.

Last Fall, after nearly every Worker at a Starbucks in Cheektowaga just outside Buffalo signed cards asking for a Union Election - becoming one of the Nation’s first Starbucks to seek to Unionize, the company swiftly closed the store for two months, saying it would become a training center.

Starbucks dispatched the shop’s Baristas to other locations, with many of the Cheektowaga Workers saying the closing was a pretext to undermine their Pro-Union Solidarity, slow their momentum, and get them to quit.

After the Staffs at several other Starbucks around the city petitioned for Union Elections, headquarters shipped in dozens of out-of-town managers to work inside its Buffalo stores and essentially shadow the local Employees.

Even Rossann Williams, Starbucks’ President of retail for North America, was suddenly working side by side with rank-and-file Baristas as they served Grande Caramel Macchiatos.

Starbucks claimed those managers were sent not to keep tabs on workers, but rather to listen to their concerns.

The company also said it sent managers to Buffalo in order to “solve operational issues” and “remodel stores.”

But many Buffalo Baristas said they felt spied on and believed the managers were sent to stifle Pro-Union talk.

A district manager from Arizona who’d been asked to go to Buffalo was also caught on tape acknowledging that it was a “last-ditch effort to try and stop” the Unionization effort.

Starbucks has repeatedly said it in no way seeks to intimidate Workers into voting against the Union.

But one Buffalo Barista, Will Westlake, told of being summoned to an hour-long anti-Union session where it was just him and six managers, who told him “how great all the benefits are at Starbucks, and if we vote in a Union, we may not have any of those benefits.”

Telling Employees that their pay and benefits could get worse with a Union - which almost never actually happens - is a common tactic that companies use against Organizing Campaigns.

If having that conversation six-on-one doesn’t count as intimidation, I don’t know what does.